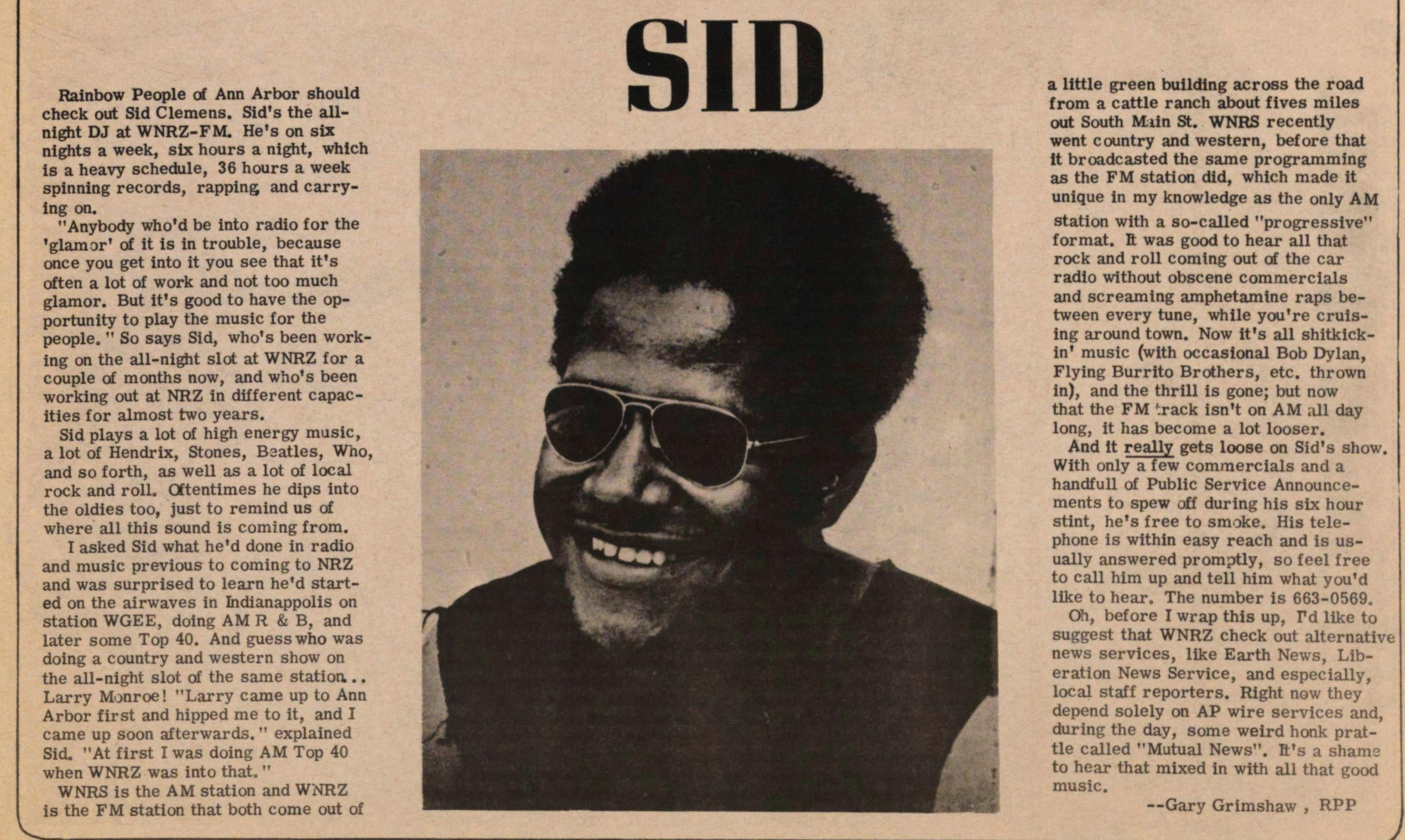 Rainbow People of Ann Arbor should check out Sid Clemens. Sid's the all night DJ at WNRZ-FM. He's on six nights a week, sIx hours a night, which is a heavy schedule, 36 hours a week spinning records, rapping and carrying on.

"Anybody who'd be into radio for the 'glamor' of it is in trouble, because once you get into it you see that it's often a lot of work and not too much glamor. But it's good to have the opportunity to play the music for the people." So says Sid, who's been working on the all-night slot at WNRZ for a couple of months now, and who's been working out at NRZ in different capacities for almost two years.

Sid plays a lot of high energy music, a lot of Hendrix, Stones, Beatles, Who, and so forth, as well as a lot of local rock and roll. Often times he dips into the oldies too, just to remind us of where all this sound is coming from.

I asked Sid what he'd done in radio and music previous to coming to NRZ and was surprised to learn he'd started on the airwaves in Indianappolis on station WGEE, doing AM R & B, and later some Top 40. And guess who was doing a country and western show on the all-night slot of the same station . . Larry Monroe! "Larry came up to Ann Arbor first and hipped me to it, and I came up soon afterwards." explained Sid. "At first I was doing AM Top 40 when WNRZ was into that."

WNRS is the AM station and WNRZ is the FM station that both come out of a little green building across the road from a cattle ranch about fives miles out South Main St. WNRS recently went country and western, before that it broadcasted the same programming as the FM station did, which made it unique in my knowledge as the only AM station with a so-called "progressive" format. It was good to hear all that rock and roll coming out of the car radio without obscene commercials and screaming amphetamine raps between every tune, while you're cruising around town. Now it's all shitkickin' music (with occasional Bob Dylan, Flying Burrito Brothers, etc. thrown in), and the thrill is gone; but now that the FM track isn't on AM all day long, it has become a lot looser.

And it really gets loose on Sid's show. With only a few commercials and a handfull of Public Service Announcements to spew off during his six hour stint, he's free to smoke. His telephone is within easy reach and is usually answered promptly, so feel free to call him up and tell him what you'd like to hear. The number is 663-0569.

Oh, before I wrap this up, I'd like to suggest that WNRZ check out alternative news services, like Earth News, Liberation News Service, and especially, local staff reporters. Right now they depend solely on AP wire services and, during the day, some weird honk prattle called "Mutual News". It's a shame to hear that mixed in with all that good music.