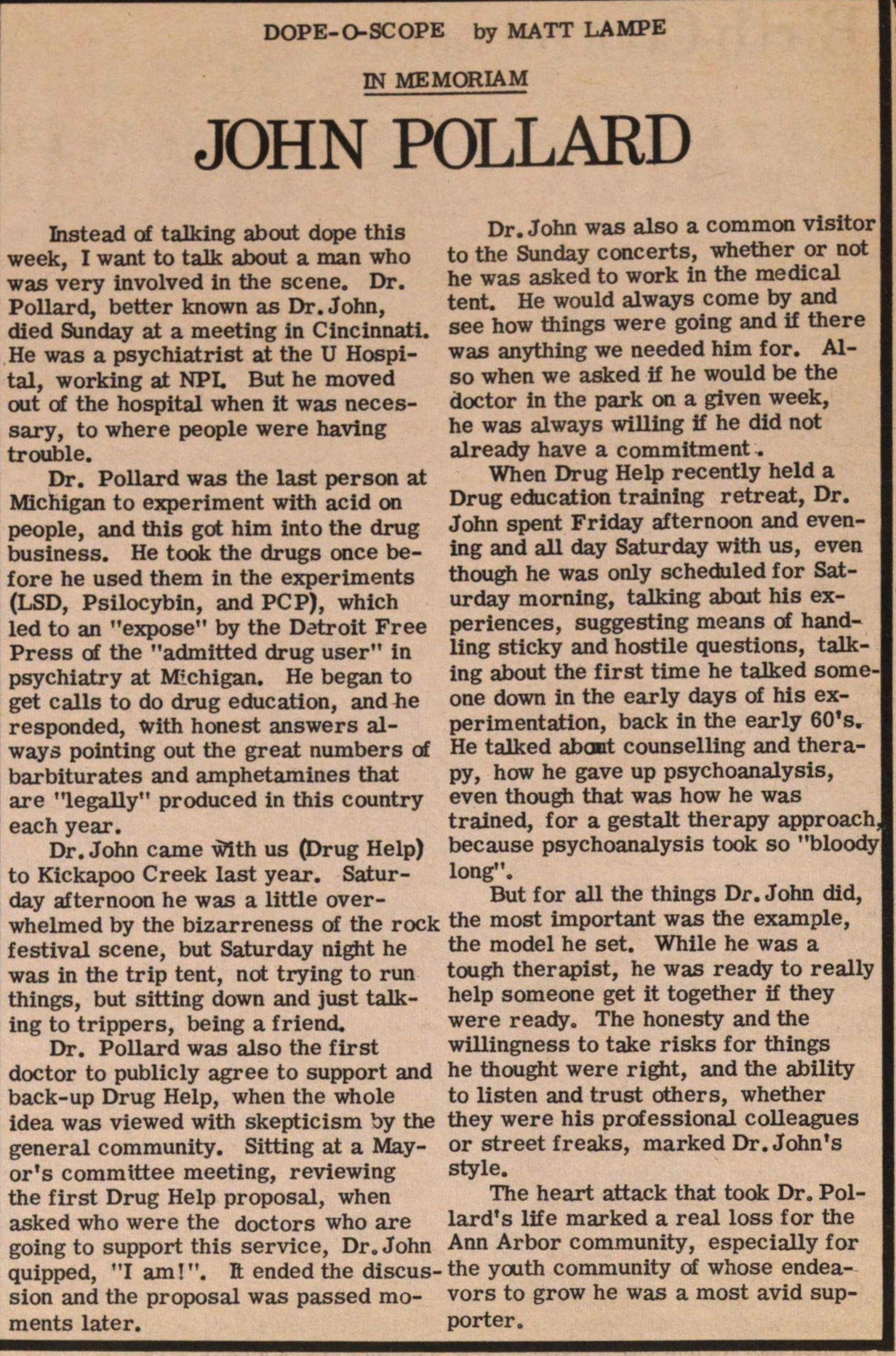 Instead of talking about dope this week, I want to talk about a man who was very involved in the scene. Dr. Pollard, better known as Dr. John, died Sunday at a meeting in Cincinnati. He was a psychiatrist at the U Hospital, working at NPI. But he moved out of the hospital when it was necessary, to where people were having trouble.

Dr. Pollard was the last person at Michigan to experiment with acid on people, and this got him into the drug business. He took the drugs once before he used them in the experiments (LSD, Psilocybin, and PCP), which led to an "expose" by the Detroit Free Press of the "admitted drug user" in psychiatry at Michigan. He began to get calls to do drug education, and he responded, with honest answers always pointing out the great numbers of barbiturates and amphetamines that are "legally" produced in this country each year.

Dr. John came with us (Drug Help) to Kickapoo Creek last year. Saturday afternoon he was a little overwhelmed by the bizarreness of the rock festival scene, but Saturday night he was in the trip tent, not trying to run things, but sitting down and just talking to trippers, being a friend.

Dr. Pollard was also the first doctor to publicly agree to support and back-up Drug Help, when the whole idea was viewed with skepticism by the general community. Sitting at a Mayor's committee meeting, reviewing the first Drug Help proposal, when asked who were the doctors who are going to support this service, Dr. John quipped, "I am!". It ended the discussion and the proposal was passed moments later.

Dr. John was also a common visitor to the Sunday concerts, whether or not he was asked to work in the medical tent. He would always come by and see how things were going and if there was anything we needed him for. Also when we asked if he would be the doctor in the park on a given week, he was always willing if he did not already have a commitment .

When Drug Help recently held a Drug education training retreat, Dr. John spent Friday afternoon and evening and all day Saturday with us, even though he was only scheduled for Saturday morning, talking about his experiences, suggesting means of handling sticky and hostile questions, talking about the first time he talked someone down in the early days of his experimentation, back in the early 60's. He talked about counselling and therapy, how he gave up psychoanalysis, even though that was how he was trained, for a gestalt therapy approach, because psychoanalysis took so "bloody long".

But for all the things Dr. John did, the most important was the example, the model he set. While he was a tough therapist, he was ready to really help someone get it together if they were ready. The honesty and the willingness to take risks for things he thought were right, and the ability to listen and trust others, whether they were his professional colleagues or street freaks, marked Dr. John's style.

The heart attack that took Dr. Pollard's life marked a real loss for the Ann Arbor community, especially for the youth community of whose endeavors to grow he was a most avid supporter.