Legal Self Defense: The Credit Ruse 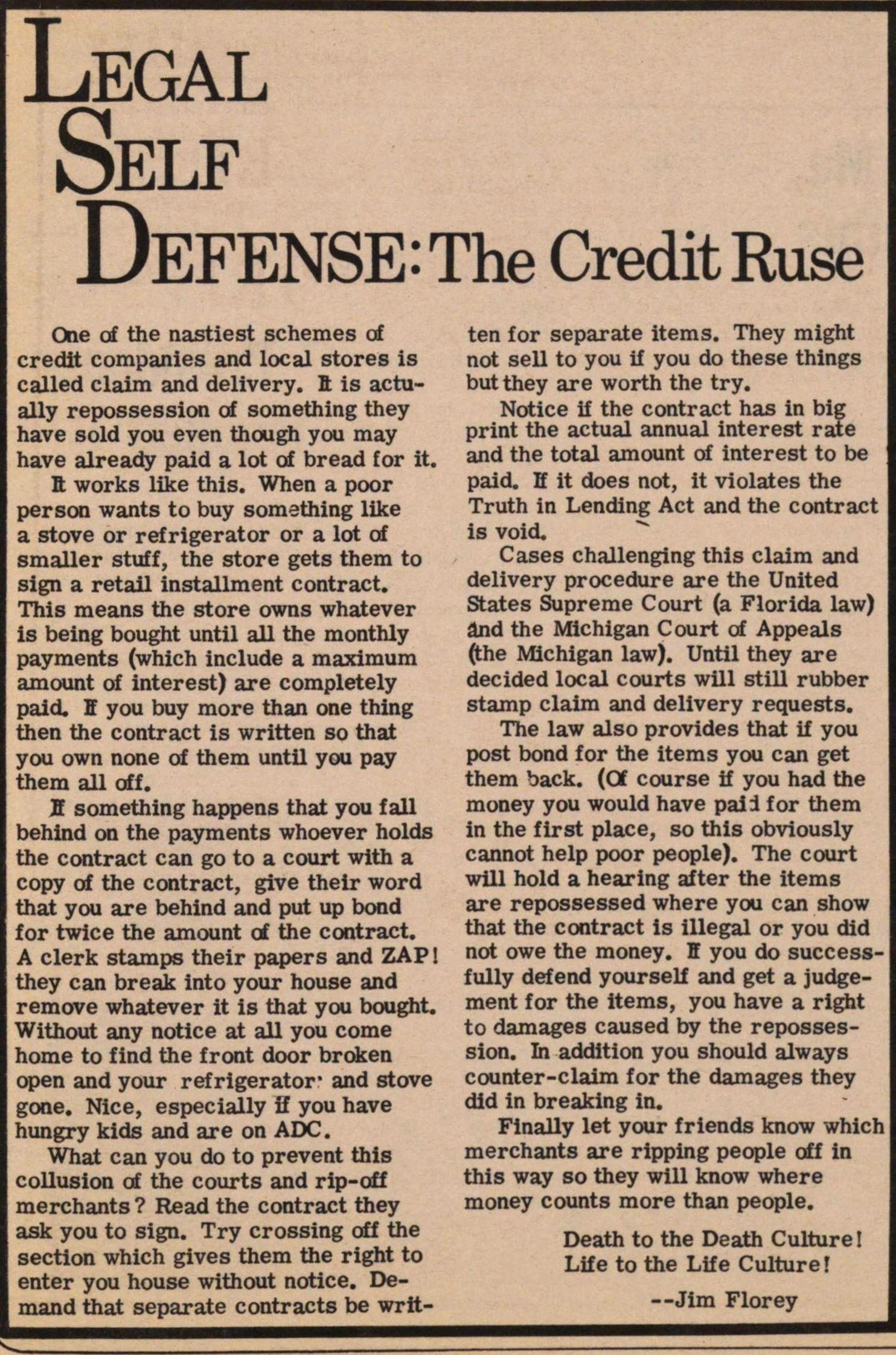 Legal Self Defense: The Credit Ruse

One of the nastiest schemes of credit companies and local stores is called claim and delivery. It is actually repossession of something they have sold you even though you may have already paid a lot of bread for it.

It works like this. When a poor person wants to buy something like a stove or refrigerator or a lot of smaller stuff, the store gets them to sign a retail installment contract. This means the store owns whatever is being bought until all the monthly payments (which include a maximum amount of interest) are completely paid. If you buy more than one thing then the contract is written so that you own none of them until you pay them all off.

If something happens that you fall behind on the payments whoever holds the contract can go to a court with a copy of the contract, give their word that you are behind and put up bond for twice the amount of the contract. A clerk stamps their papers and ZAP! they can break into your house and remove whatever it is that you bought. Without any notice at all you come home to find the front door broken open and your refrigerator and stove gone. Nice, especially if you have hungry kids and are on ADC.

What can you do to prevent this collusion of the courts and rip-off merchants? Read the contract they ask you to sign. Try crossing off the section which gives them the right to enter you house without notice. Demand that separate contracts be written for separate items. They might not sell to you if you do these things but they are worth the try.

Notice if the contract has in big print the actual annual interest rate and the total amount of interest to be paid. If it does not, it violates the Truth in Lending Act and the contract is void.

The law also provides that if you post bond for the items you can get them back. (Of course if you had the money you would have paid for them in the first place, so this obviously cannot help poor people). The court will hold a hearing after the items are repossessed where you can show that the contract is illegal or you did not owe the money. If you do successfully defend yourself and get a judgement for the items, you have a right to damages caused by the repossession. In addition you should always counter-claim for the damages they did in breaking in.

Finally let your friends know which merchants are ripping people off in this way so they will know where money counts more than people.

Death to the Death Culture!

Life to the Life Culture!