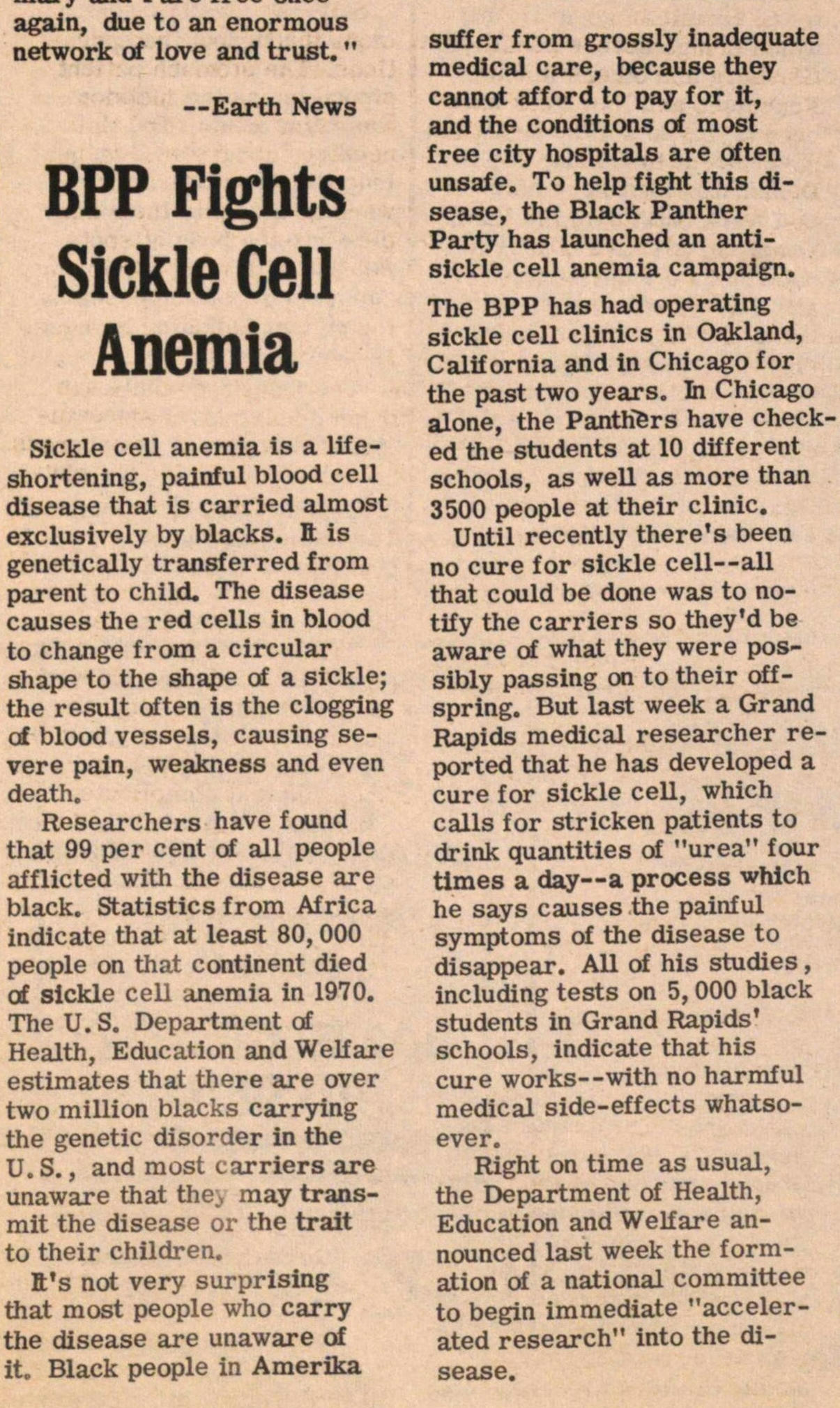 Sickle cell anemia is a life-shortening, painful blood cell disease that is carried almost exclusively by blacks. It is genetically transferred from parent to child. The disease causes the red cells in blood to change from a circular shape to the shape of a sickle; the result often is the clogging of blood vessels, causing severe pain, weakness and even death.

Researchers have found that 99 per cent of all people afflicted with the disease are black. Statistics from Africa indicate that at least 80,000 people on that continent died of sickle cell anemia in 1970. The U. S. Department of Health, Education and Welfare estimates that there are over two million blacks carrying the genetic disorder in the U.S., and most carriers are unaware that they may transmit the disease or the trait to their children.

It's not very surprising that most people who carry the disease are unaware of it. Black people in Amerika suffer from grossly inadequate medical care, because they cannot afford to pay for it, and the conditions of most free city hospitals are often unsafe. To help fight this disease, the Black Panther Party has launched an anti-sickle cell anemia campaign.

The BPP has had operating sickle cell clinics in Oakland, California and in Chicago for the past two years. In Chicago alone, the Panthers have checked the students at 10 different schools, as well as more than 3500 people at their clinic.

Until recently there's been no cure for sickle cell--all that could be done was to notify the carriers so they'd be aware of what they were possibly passing on to their offspring. But last week a Grand Rapids medical researcher reported that he has developed a cure for sickle cell, which calls for stricken patients to drink quantities of "urea" four times a day- a process which he says causes the painful symptoms of the disease to disappear. All of his studies, including tests on 5,000 black students in Grand Rapids' schools, indicate that his cure works - with no harmful medical side-effects whatsoever.

Right on time as usual, the Department of Health, Education and Welfare announced last week the formation of a national committee to begin immediate "accelerated research" into the disease.