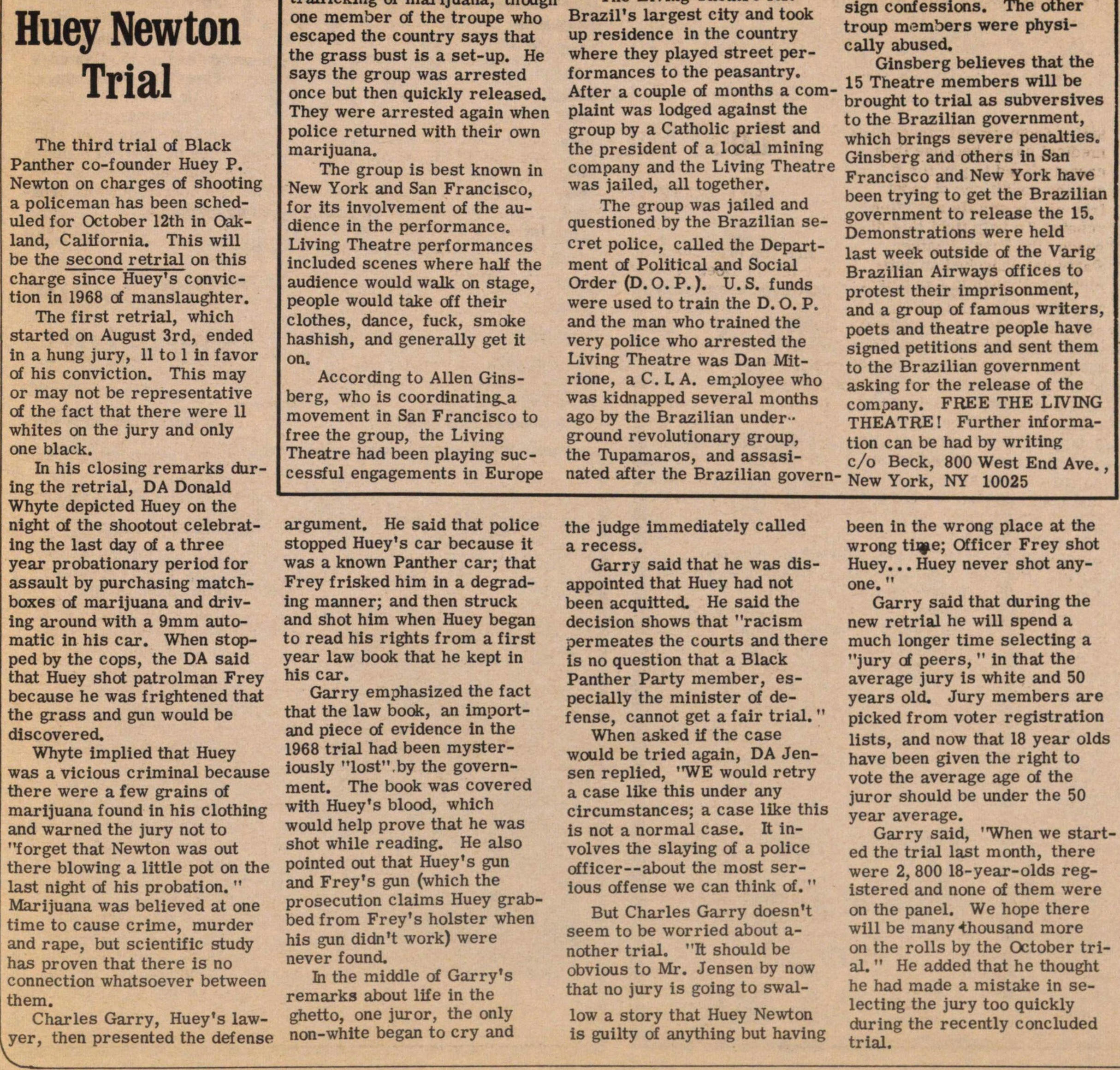 The third trial of Black Panther co-founder Huey P. Newton on charges of shooting a policeman has been scheduled for October 12th in Oakland, California. This will be the second retrial on this charge since Huey's conviction in 1968 of manslaughter.

The first retrial, which started on August 3rd, ended in a hung jury, 11 to 1 in favor of his conviction. This may or may not be representative of the fact that there were 11 whites on the jury and only one black.

In his closing remarks during the retrial, DA Donald Whyte depicted Huey on the night of the shootout celebrating the last day of a three year probationary period for assault by purchasing matchboxes of marijuana and driving around with a 9mm automatic in his car. When stopped by the cops, the DA said that Huey shot patrolman Frey because he was frightened that the grass and gun would be discovered.

Whyte implied that Huey was a vicious criminal because there were a few grains of marijuana found in his clothing and warned the jury not to "forget that Newton was out there blowing a little pot on the last night of his probation." Marijuana was believed at one time to cause crime, murder and rape, but scientific study has proven that there is no connection whatsoever between them.

Charles Garry, Huey's lawyer, then presented the defense argument. He said that police stopped Huey's car because it was a known Panther car; that Frey frisked him in a degrading manner; and then struck and shot him when Huey began to read his rights from a first year law book that he kept in his car.

Garry emphasized the fact that the law book, an important piece of evidence in the 1968 trial had been mysteriously "lost" by the government. The book was covered with Huey's blood, which would help prove that he was shot while reading. He also pointed out that Huey's gun and Frey's gun (which the prosecution claims Huey grabbed from Frey's holster when his gun didn't work) were never found.

In the middle of Garry's remarks about life in the ghetto, one juror, the only non-white began to cry and the judge immediately called a recess.

Garry said that he was disappointed that Huey had not been acquitted. He said the decision shows that "racism permeates the courts and there is no question that a Black Panther Party member, especially the minister of defense, cannot get a fair trial."

When asked if the case would be tried again, DA Jensen replied, "WE would retry a case like this under any circumstances; a case like this is not a normal case. It involves the slaying of a police officer - about the most serious offense we can think of."

But Charles Garry doesn't seem to be worried about another trial. "It should be obvious to Mr. Jensen by now that no jury is going to swallow a story that Huey Newton is guilty of anything but having been in the wrong place at the wrong time; Officer Frey shot Huey. . . Huey never shot anyone."

Garry said that during the new retrial he will spend a much longer time selecting a "jury of peers," in that the average jury is white and 50 years old. Jury members are picked from voter registration lists, and now that 18 year olds have been given the right to vote the average age of the juror should be under the 50 year average.

Garry said, "When we started the trial last month, there were 2,800 18-year-olds registered and none of them were on the panel. We hope there will be many thousand more on the rolls by the October trial." He added that he thought he had made a mistake in selecting the jury too quickly during the recently concluded trial.