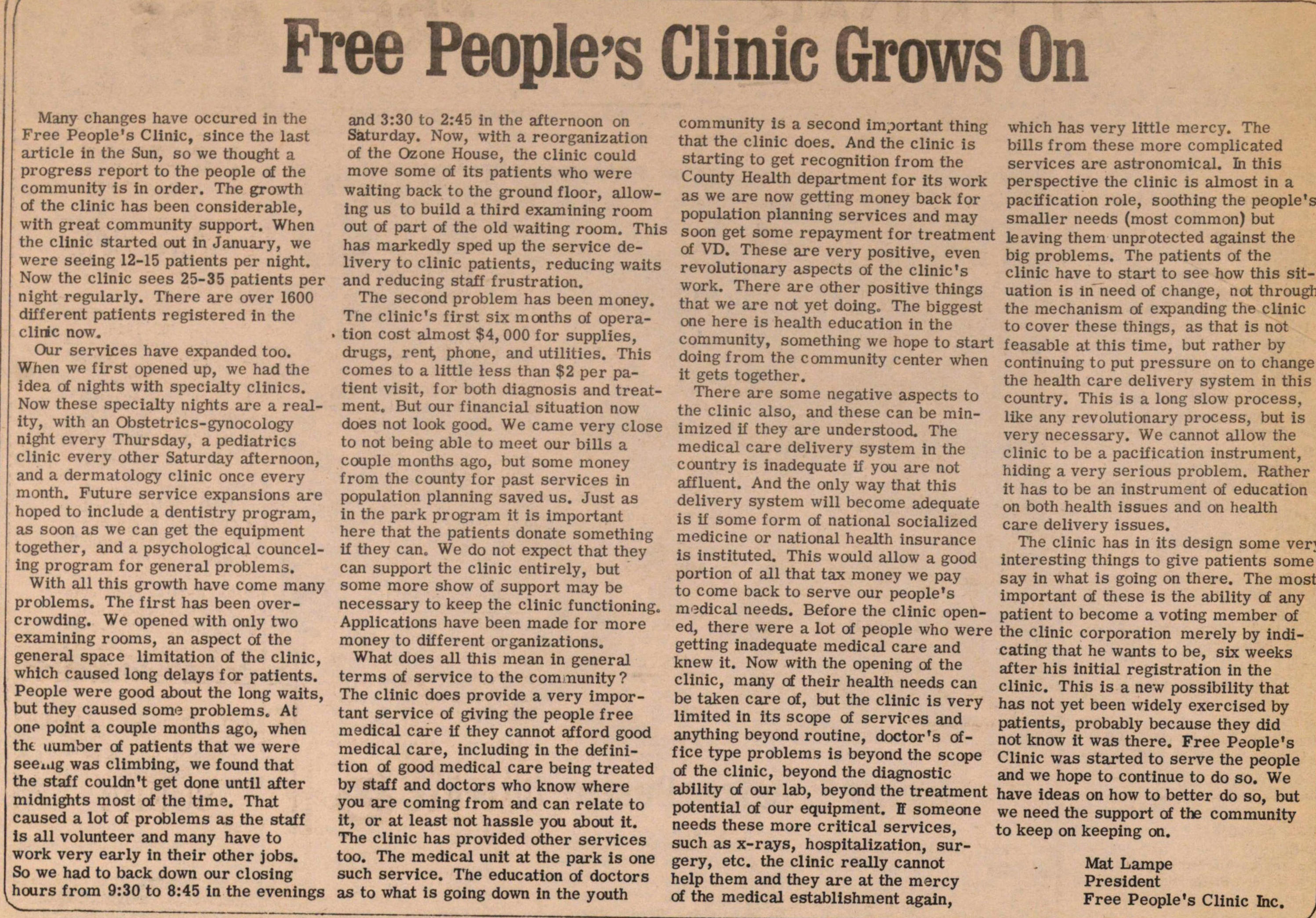 Our services have expanded too. When we first opened up, we had the idea of nights with specialty clinics. Now these specialty nights are a reality, with an Obstetrics-gynocology night every Thursday, a pediatrics clinic every other Saturday afternoon, and a dermatology clinic once every month. Future service expansions are hoped to include a dentistry program, as soon as we can get the equipment together, and a psychological counceling program for general problems.

With all this growth have come many problems. The first has been overcrowding. We opened with only two examining rooms, an aspect of the general space limitation of the clinic, which caused long delays for patients. People were good about the long waits, but they caused some problems. At one point a couple months ago, when the number of patients that we were seeing was climbing, we found that the staff couldn't get done until after midnights most of the time. That caused a lot of problems as the staff is all volunteer and many have to work very early in their other jobs. So we had to back down our closing hours from 9:30 to 8:45 in the evenings and 3:30 to 2:45 in the afternoon on Saturday. Now, with a reorganization of the Ozone House, the clinic could move some of its patients who were waiting back to the ground floor, allowing us to build a third examining room out of part of the old waiting room. This has markedly sped up the service delivery to clinic patients, reducing waits and reducing staff frustration.

The second problem has been money. The clinic's first six months of operaition cost almost $4,000 for supplies, drugs, rent, phone, and utilities. This comes to a little less than $2 per patient visit, for both diagnosis and treatment. But our financial situation now does not look good. We came very close to not being able to meet our bills a couple months ago, but some money from the county for past services in population planning saved us. Just as in the park program it is important here that the patients donate something if they can. We do not expect that they can support the clinic entirely, but some more show of support may be necessary to keep the clinic functioning. Applications have been made for more money to different organizations.

What does all this mean in general terms of service to the community? The clinic does provide a very important service of giving the people free medical care if they cannot afford good medical care, including in the definition of good medical care being treated by staff and doctors who know where you are coming from and can relate to it, or at least not hassle you about it. The clinic has provided other services too. The medical unit at the park is one such service. The education of doctors as to what is going down in the youth community is a second important thing that the clinic does. And the clinic is starting to get recognition from the County Health department for its work as we are now getting money back for population planning services and may soon get some repayment for treatment of VD. These are very positive, even revolutionary aspects of the clinic's work. There are other positive things that we are not yet doing. The biggest one here is health education in the community, something we hope to start doing from the community center when it gets together.

There are some negative aspects to the clinic also, and these can be minimized if they are understood. The medical care delivery system in the country is inadequate if you are not affluent. And the only way that this delivery system will become adequate is if some form of national socialized medicine or national health insurance is instituted. This would allow a good portion of all that tax money we pay to come back to serve our people's medical needs. Before the clinic opened, there were a lot of people who were getting inadequate medical care and knew it. Now with the opening of the clinic, many of their health needs can be taken care of, but the clinic is very limited in its scope of services and anything beyond routine, doctor's office type problems is beyond the scope of the clinic, beyond the diagnostic ability of our lab, beyond the treatment potential of our equipment. If someone needs these more critical services, such as x-rays, hospitalization, surgery, etc. the clinic really cannot help them and they are at the mercy of the medical establishment again, which has very little mercy. The bills from these more complicated services are astronomical. In this perspective the clinic is almost in a pacification role, soothing the people's smaller needs (most common) but leaving them unprotected against the big problems. The patients of the clinic have to start to see how this situation is in need of change, not through the mechanism of expanding the clinic to cover these things, as that is not feasable at this time, but rather by continuing to put pressure on to change the health care delivery system in this country. This is a long slow process, like any revolutionary process, but is very necessary. We cannot allow the clinic to be a pacification instrument, hiding a very serious problem. Rather it has to be an instrument of education on both health issues and on health care delivery issues.

The clinic has in its design some very interesting things to give patients some say in what is going on there. The most important of these is the ability of any patient to become a voting member of the clinic corporation merely by indicating that he wants to be, six weeks after his initial registration in the clinic. This is a new possibility that has not yet been widely exercised by patients, probably because they did not know it was there. Free People's Clinic was started to serve the people and we hope to continue to do so. We have ideas on how to better do so, but we need the support of the community to keep on keeping on.