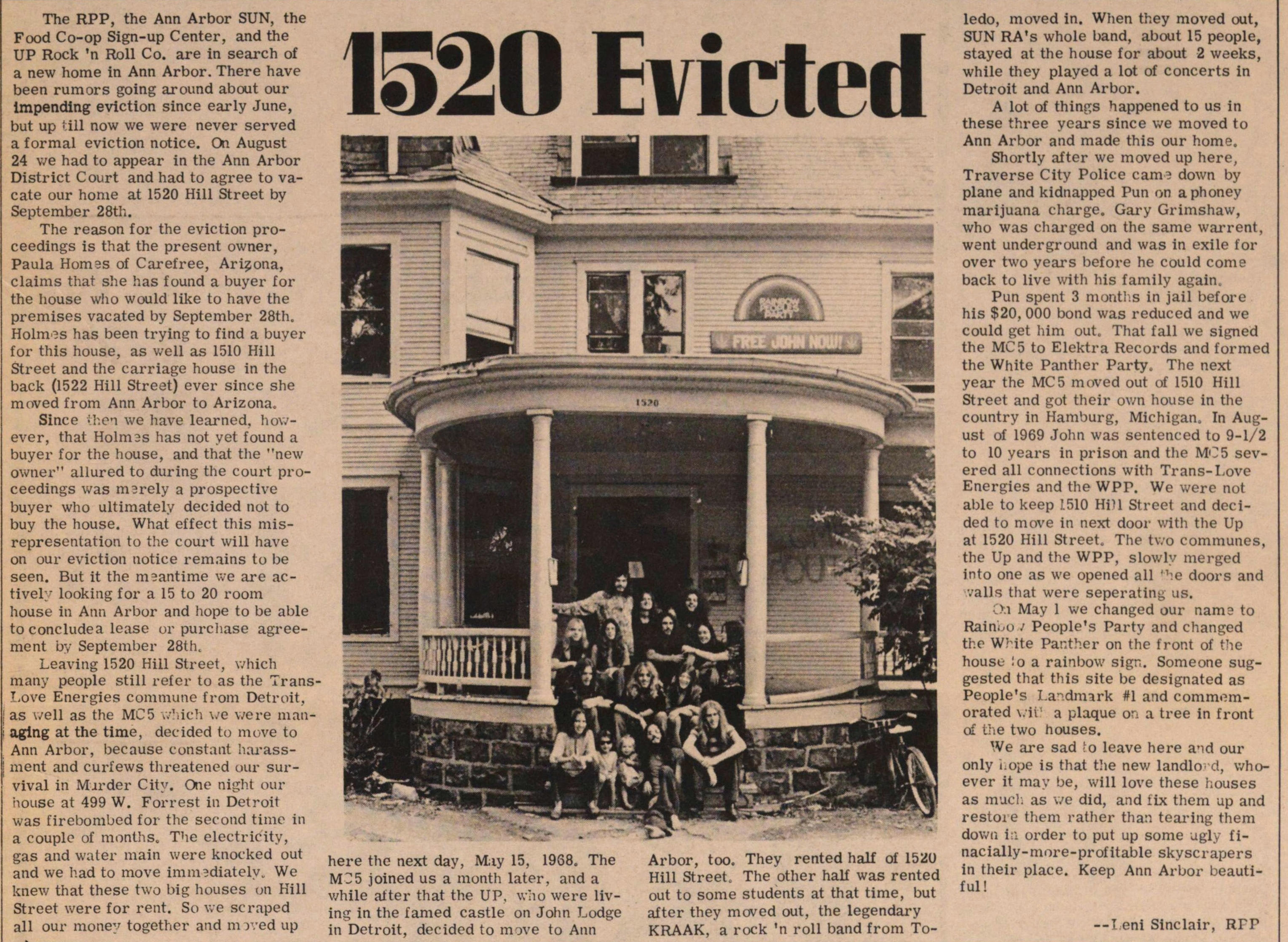 The RPP, the Ann Arbor SUN, the Food Co-op Sign-up Center, and the UP Rock 'n Roll Co. are in search of a new home in Ann Arbor. There have been rumors going around about our impending eviction since early June, but up till now we were never served a formal eviction notice. On August 24 we had to appear in the Ann Arbor District Court and had to agree to vacate our home at 1520 Hill Street by September 28th.

The reason for the eviction proceedings is that the present owner, Paula Homs of Carefree, Arizona, claims that she has found a buyer for the house who would like to have the premises vacated by September 28th. Holmes has been trying to find a buyer for this house, as well as 1510 Hill Street and the carriage house in the back (1522 Hill Street) ever since she moved from Ann Arbor to Arizona.

Since then we have learned, however, that Holmes has not yet found a buyer for the house, and that the "new owner" alluded to during the court proceedings was merely a prospective buyer who ultimately decided not to buy the house. What effect this misrepresentation to the court will have on our eviction notice remains to be seen. But it the meantime we are actively looking for a 15 to 20 room house In Ann Arbor and hope to be able to conclude a lease or purchase agreement by September 28th.

Leaving 1520 Hill Street, which many people still refer to as the Trans-Love Energies commune from Detroit, as well as the MC5 which we were managing at the time, decided to move to Ann Arbor, because constant harassment and curfews threatened our survival in Murder City. One night our house at 499 W. Forrest in Detroit was firebombed for the second time in a couple of months. The electricity, gas and water main were knocked out and we had to move immediately. We knew that these two big houses on Hill Street were for rent. So we scraped all our money together and moved up here the next day, May 15, 1968. The MC5 joined us a month later, and a while after that the UP, who were living in the famed castle on John Lodge in Detroit, decided to move to Ann Arbor, too. They rented half of 1520 Hill Street, The other half was rented out to some students at that time, but after they moved out, the legendary KRAAK, a rock 'n roll band from Toledo, moved in. When they moved out, SUN RA's whole band, about 15 people, stayed at the house for about 2 weeks, while they played a lot of concerts in Detroit and Ann Arbor.

A lot of things happened to us in these three years since we moved to Ann Arbor and made this our home.

Shortly after we moved up here, Traverse City Police came down by plane and kidnapped Pun on a phony marijuana charge. Gary Grimshaw, who was charged on the same warrant, went underground and was in exile for over two years before he could come back to live with his family again.

Pun spent 3 months in jail before his $20,000 bond was reduced and we could get him out. That fall we signed the MC5 to Elektra Records and formed the White Panther Party. The next year the MC5 moved out of 1510 Hill Street and got their own house in the country in Hamburg, Michigan. In August of 1969 John was sentenced to 9/12 to 10 years in prison and the MC5 severed all connections with Trans-Love Energies and the WPP. We were not able to keep 1510 Hill Street and decided to move in next door with the Up at 1520 Hill Street. The two communes, the Up and the WPP, slowly merged into one as we opened all the doors and walls that were separating us. On May 1 we changed our name to Rainbow People's Party and changed the White Panther on the front of the house to a rainbow sign. Someone suggested that this site be designated as People's Landmark #1 and commemorated with a plaque on a tree in front of the two houses.

We are sad to leave here and our only hope is that the new landlord, whoever it may be, will love these houses as much as we did, and fix them up and restore them rather than tearing them down in order to put up some ugly financially-more-profitable skyscrapers in their place. Keep Ann Arbor beautiful!