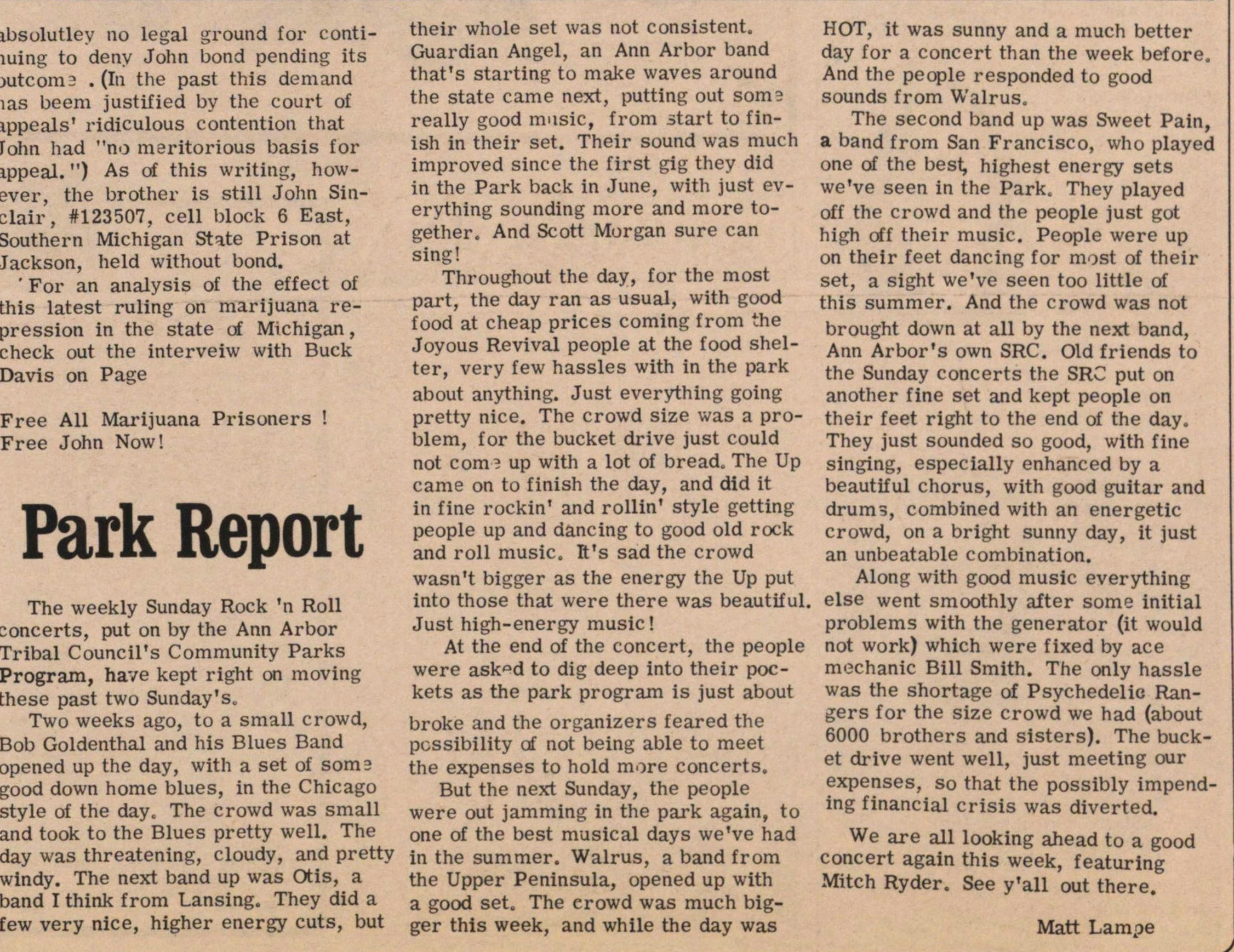 Two weeks ago, to a small crowd, Bob Goldenthal and his Blues Band opened up the day, with a set of some good down home blues, in the Chicago style of the day. The crowd was small and took to the Blues pretty well. The day was threatening, cloudy, and pretty windy. The next band up was Otis, a band I think from Lansing. They did a few very nice, higher energy cuts, but their whole set was not consistent. Guardian Angel, an Ann Arbor band that's starting to make waves around the state came next, putting out some really good music, from start to finish in their set. Their sound was much improved since the first gig they did in the Park back in June, with just everything sounding more and more together. And Scott Morgan sure can sing!

Throughout the day, for the most part, the day ran as usual, with good food at cheap prices coming from the Joyous Revival people at the food shelter, very few hassles with in the park about anything. Just everything going pretty nice. The crowd size was a problem, for the bucket drive just could not corm up with a lot of bread. The Up came on to finish the day, and did it in fine rockin' and rollin' style getting people up and dancing to good old rock and roll music. It's sad the crowd wasn't bigger as the energy the Up put into those that were there was beautiful. Just high-energy music!

At the end of the concert, the people were asked to dig deep into their pockets as the park program is just about broke and the organizers feared the possibility of not being able to meet the expenses to hold more concerts.

But the next Sunday, the people were out jamming in the park again, to one of the best musical days we've had in the summer. Walrus, a band from the Upper Peninsula, opened up with a good set. The crowd was much bigger this week, and while the day was HOT, it was sunny and a much better day for a concert than the week before. And the people responded to good sounds from Walrus.

The second band up was Sweet Pain, a band from San Francisco, who played one of the best, highest energy sets we've seen in the Park. They played off the crowd and the people just got high off their music. People were up on their feet dancing for most of their set, a sight we've seen too little of this summer. And the crowd was not brought down at all by the next band, Ann Arbor's own SRC. Old friends to the Sunday concerts the SRC put on another fine set and kept people on their feet right to the end of the day. They just sounded so good, with fine singing, especially enhanced by a beautiful chorus, with good guitar and drums, combined with an energetic crowd, on a bright sunny day, it just an unbeatable combination.

Along with good music everything else went smoothly after some initial problems with the generator (it would not work) which were fixed by ace mechanic Bill Smith. The only hassle was the shortage of Psychedelic Rangers for the size crowd we had (about 6000 brothers and sisters). The bucket drive went well, just meeting our expenses, so that the possibly impending financial crisis was diverted.

We are all looking ahead to a good concert again this week, featuring Mitch Ryder. See y'all out there.