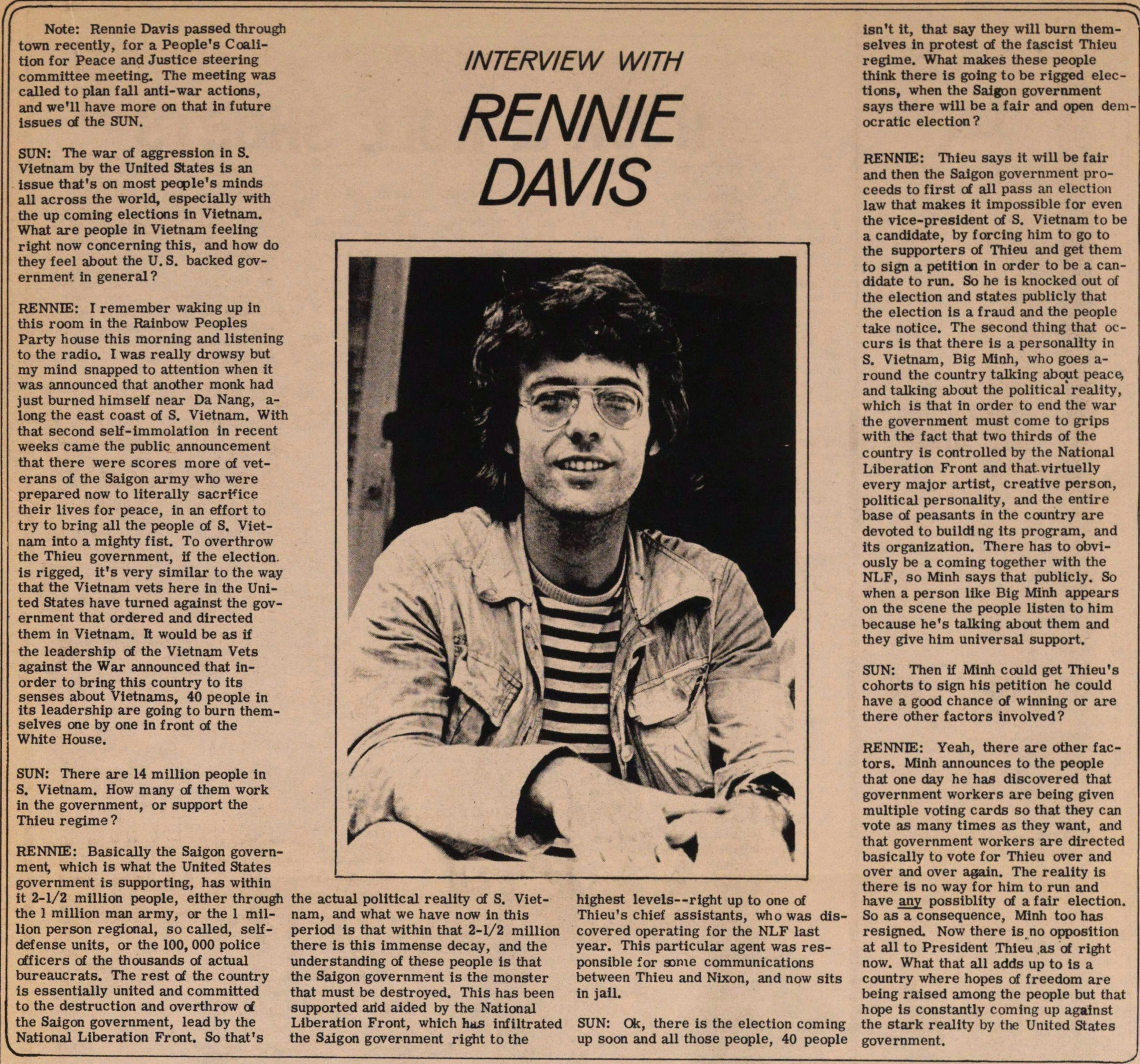 Note: Rennie Davis passed through town recently, for a People's Coalition for Peace and Justice steering committee meeting. The meeting was called to plan fall anti-war actions, and we'll have more on that in future issues of the SUN.

SUN: The war of aggression in S. Vietnam by the United States is an issue that's on most people's minds all across the world, especially with the up coming elections in Vietnam. What are people in Vietnam feeling right now concerning this, and how do they feel about the U. S. backed government in general?

RENNIE: I remember waking up in this room in the Rainbow Peoples Party house this morning and listening to the radio. I was really drowsy but my mind snapped to attention when it was announced that another monk had just burned himself near Da Nang, along the east coast of S. Vietnam. With that second self-immolation in recent weeks came the public announcement that there were scores more of veterans of the Saigon army who were prepared now to literally sacrifice their lives for peace, in an effort to try to bring all the people of S. Vietnam into a mighty fist. To overthrow the Thieu government, if the election is rigged, it's very similar to the way that the Vietnam vets here in the United States have turned against the government that ordered and directed them in Vietnam. It would be as if the leadership of the Vietnam Vets against the War announced that in order to bring this country to its senses about Vietnams, 40 people in its leadership are going to burn themselves one by one in front of the White House.

SUN: There are 14 million people in S. Vietnam. How many of them work in the government, or support the Thieu regime?

RENNIE: Basically the Saigon government, which is what the United States government is supporting, has within it 2-1/2 million people, either through the 1 million man army, or the 1 million person regional, so called, self-defense units, or the 100,000 police officers of the thousands of actual bureaucrats. The rest of the country is essentially united and committed to the destruction and overthrow of the Saigon government, lead by the National Liberation Front. So that's the actual political reality of S. Vietnam, and what we have now in this period is that within that 2-1/2 million there is this immense decay, and the understanding of these people is that the Saigon government is the monster that must be destroyed. This has been supported and aided by the National Liberation Front, which has infiltrated the Saigon government right to the highest levels--right up to one of Thieu's chief assistants, who was discovered operating for the NLF last year. This particular agent was responsible for some Communications between Thieu and Nixon, and now sits in jail.

SUN: Ok, there is the election coming up soon and all those people, 40 people isn't it, that say they will burn themselves in protest of the fascist Thieu regime. What makes these people think there is going to be rigged elections, when the Saigon government says there will be a fair and open democratic election?

RENNIE: Thieu says it will be fair and then the Saigon government proceeds to first of all pass an election law that makes it impossible for even the vice-president of S. Vietnam to be a candidate, by forcing him to go to the supporters of Thieu and get them to sign a petition in order to be a candidate to run. So he is knocked out of the election and states publicly that the election is a fraud and the people take notice. The second thing that occurs is that there is a personality in S. Vietnam, Big Minh, who goes around the country talking about peace, and talking about the political reality, which is that in order to end the war the government must come to grips with the fact that two thirds of the country is controlled by the National Liberation Front and that virtually every major artist, creative person, political personality, and the entire base of peasants in the country are devoted to building its program, and its organization. There has to obviously be a coming together with the NLF, so Minh says that publicly. So when a person like Big Minh appears on the scène the people listen to him because he's talking about them and they give him universal support.

SUN: Then if Minh could get Thieu's cohorts to sign his petition he could have a good chance of winning or are there other factors involved?

RENNE: Yeah, there are other factors. Minh announces to the people that one day he has discovered that government workers are being given multiple voting cards so that they can vote as many times as they want, and that government workers are directed basically to vote for Thieu over and over and over again. The reality is there is no way for him to run and have any possibility of a fair election. So as a consequence, Minh too has resigned. Now there is no opposition at all to President Thieu as of right now. What that all adds up to is a country where hopes of freedom are being raised among the people but that hope is constantly coming up against the stark reality by the United States government.