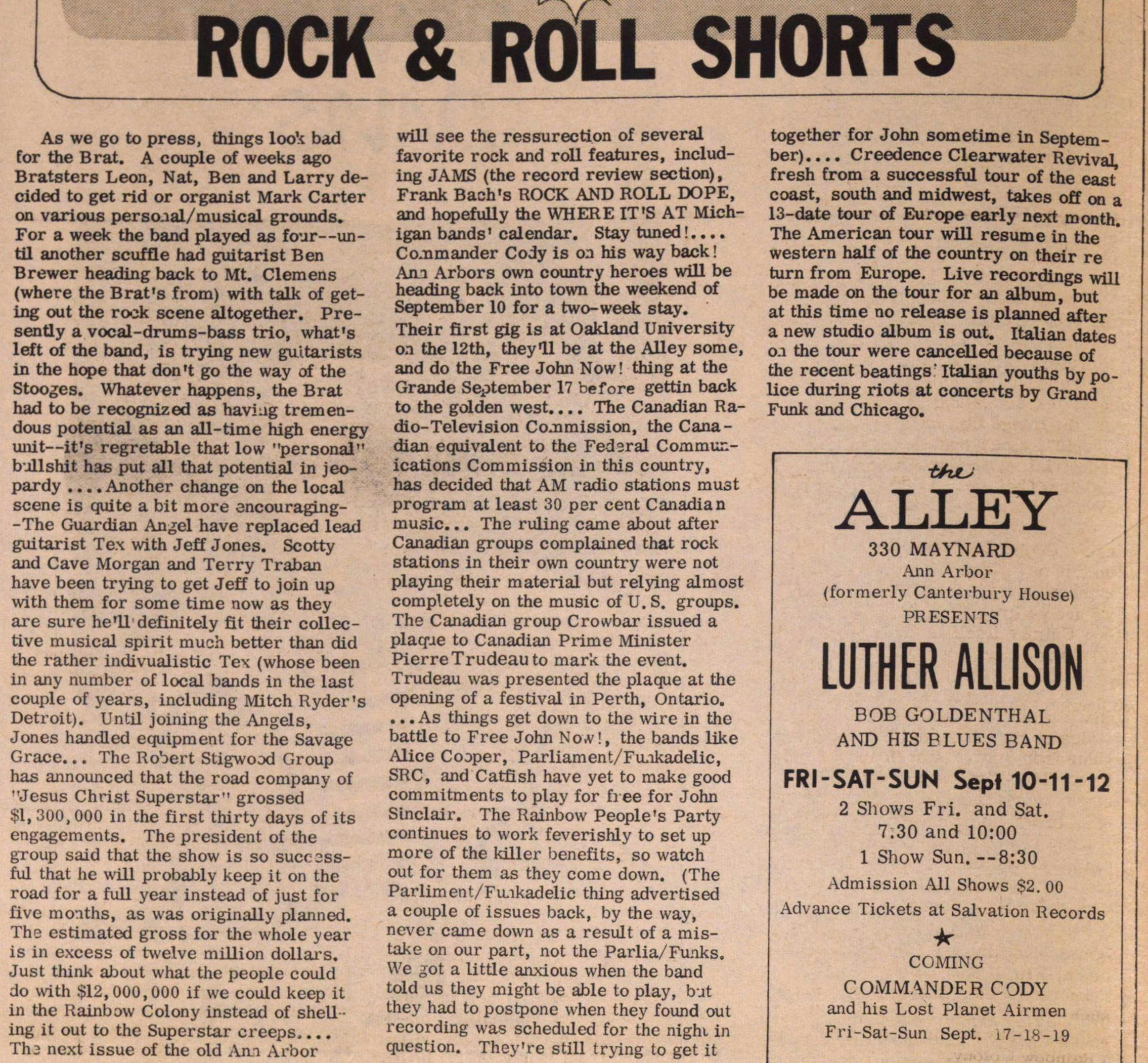 As we go to press, things look bad for the Brat. A couple of weeks ago Bratsters Leon, Nat, Ben and Larry decided to get rid or organist Mark Carter on various personal/musical grounds. For a week the band played as four - until another scuffle had guitarist Ben Brewer heading back to Mt. Clemens (where the Brat's from) with talk of getting out the rock scene altogether. Presently a vocal-drums-bass trio, what's left of the band, is trying new guitarists in the hope that don't go the way of the Stooges. Whatever happens, the Brat had to be recognized as having tremendous potential as an all-time high energy unit - it's regrettable that low "personal" bullshit has put all that potential in jeopardy . . . .

Another change on the local scene is quite a bit more encouraging--The Guardian Angel have replaced lead guitarist Tex with Jeff Jones. Scotty and Cave Morgan and Terry Traban have been trying to get Jeff to join up with them for some time now as they are sure he'll definitely fit their collective musical spirit much better than did the rather individualistic Tex (whose been in any number of local bands in the last couple of years, including Mitch Ryder 's Detroit). Until joining the Angels, Jones handled equipment for the Savage Grace... The Robert Stigwood Group has announced that the road company of "Jesus Christ Superstar" grossed $1,300,000 in the first thirty days of its engagements. The president of the group said that the show is so successful that he will probably keep it on the road for a full year instead of just for five months, as was originally planned. The estimated gross for the whole year is in excess of twelve million dollars. Just think about what the people could do with $12,000,000 if we could keep it in the Rainbow Colony instead of shelling it out to the Superstar creeps. . . .

The next issue of the old Ann Arbor will see the resurrection of several favorite rock and roll features, including JAMS (the record review section), Frank Bach's ROCK AND ROLL DOPE, and hopefully the WHERE IT'S AT Michigan bands' calendar. Stay tuned! . . . .

Commander Cody is on his way back! Ann Arbors own country heroes will be heading back into town the weekend of September 10 for a two-week stay. Their first gig is at Oakland University on the 12th, they'll be at the Alley some, and do the Free John Now! thing at the Grande September 17 before gettin back to the golden west. . . .

The Canadian Radio-Television Commission, the Canadian equivalent to the Federal Communications Commission in this country, has decided that AM radio stations must program at least 30 per cent Canadian music. . .

The ruling came about after Canadian groups complained that rock stations in their own country were not playing their material but relying almost completely on the music of U.S. groups. The Canadian group Crowbar issued a plaque to Canadian Prime Minister Pierre Trudeau to mark the event. Trudeau was presented the plaque at the opening of a festival in Perth, Ontario. . . .

As things get down to the wire in the battle to Free John Now!, the bands like Alice Cooper, Parliament/Funkadelic, SRC, and Catfish have yet to make good commitments to play for free for John Sinclair. The Rainbow People's Party continues to work feverishly to set up more of the killer benefits, so watch out for them as they come down. (The Parliament/Funkadelic thing advertised a couple of issues back, by the way, never came down as a result of a mistake on our part, not the Parlia/Funks. We got a little anxious when the band told us they might be able to play, but they had to postpone when they found out recording was scheduled for the night in question. They're still trying to get it together for John sometime in September). . . .

Creedence Clearwater Revival, fresh from a successful tour of the east coast, south and mid-west, takes off on a 13-date tour of Europe early next month. The American tour will resume in the western half of the country on their return from Europe. Live recordings will be made on the tour for an album, but at this time no release is planned after a new studio album is out. Italian dates on the tour were cancelled because of the recent beatings' Italian youths by police during riots at concerts by Grand Funk and Chicago.