Pun On The Community... 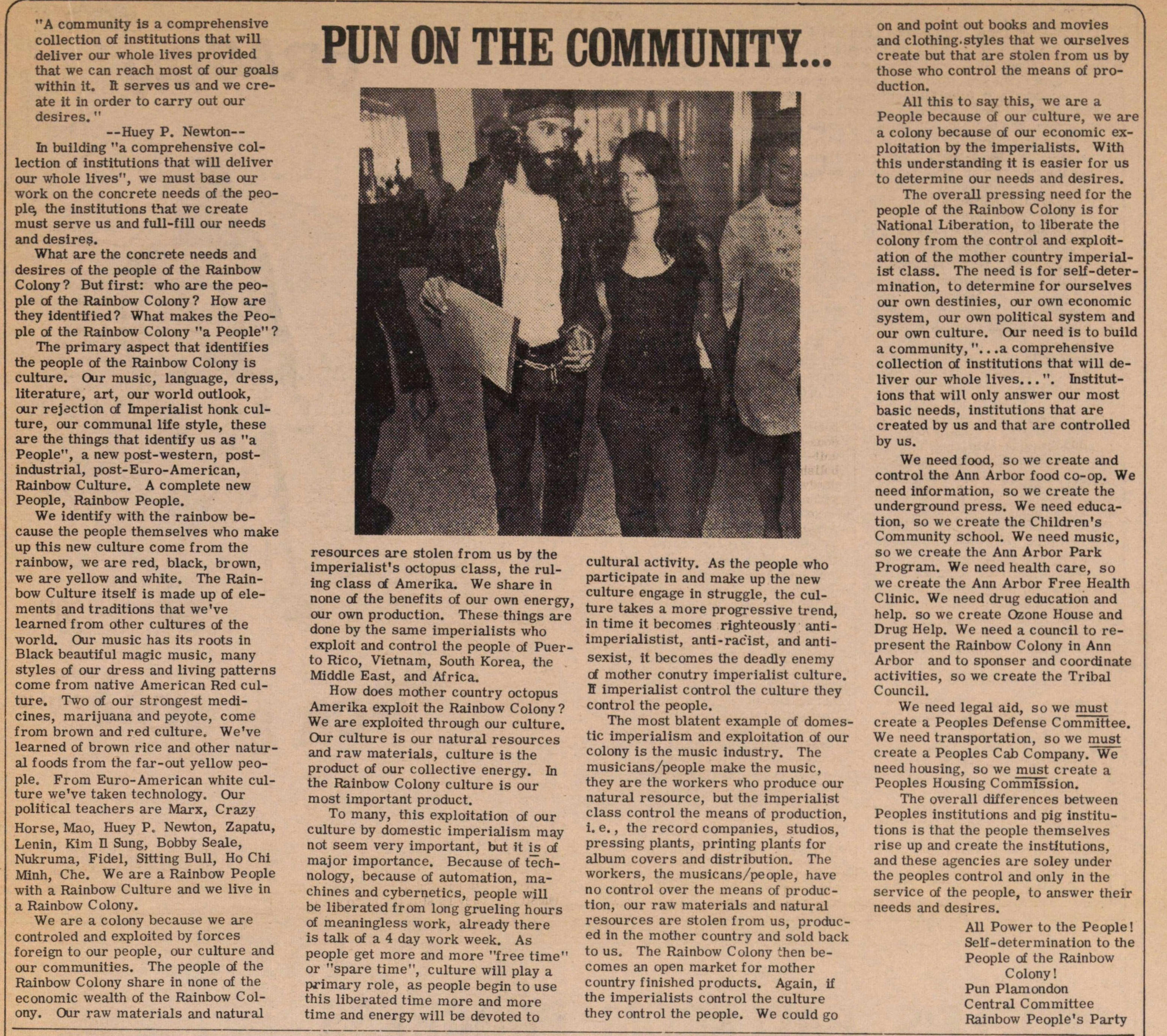 "A community is a comprehensive collection of institutions that will deliver our whole lives provided that we can reach most of our goals within it. It serves us and we create it in order to carry out our desires." --Huey P. Newton--

In building "a comprehensive collection of institutions that will deliver our whole lives", we must base our work on the concrete needs of the people, the institutions that we create must serve us and full-fill our needs and desires.

The primary aspect that identifies the people of the Rainbow Colony is culture. Our music, language, dress, literature, art, our world outlook, our rejection of Imperialist honk culture, our communal life style, these are the things that identify us as "a People", a new post-western, post-industrial, post-Euro-American, Rainbow Culture. A complete new People, Rainbow People.

We identify with the rainbow because the people themselves who make up this new culture come from the rainbow, we are red, black, brown, we are yellow and white. The Rainbow Culture itself is made up of elements and traditions that we've learned from other cultures of the world. Our music has its roots in Black beautiful magic music, many styles of our dress and living patterns come from native American Red culture. Two of our strongest medicines, marijuana and peyote, come from brown and red culture. We've learned of brown rice and other natural foods from the far-out yellow people. From Euro-American white culture we've taken technology. Our political teachers are Marx, Crazy Horse, Mao, Huey P. Newton, Zapatu, Lenin, Kim Il Sung, Bobby Seale, Nukruma, Fidel, Sitting Buil, Ho Chi Minh, Che. We are a Rainbow People with a Rainbow Culture and we live in a Rainbow Colony.

We are a colony because we are controlled and exploited by forces foreign to our people, our culture and our communities. The people of the Rainbow Colony share in none of the economic wealth of the Rainbow Colony. Our raw materials and natural resources are stolen from us by the imperialist's octopus class, the ruling class of Amerika. We share in none of the benefits of our own energy, our own production. These things are done by the same imperialists who exploit and control the people of Puerto Rico, Vietnam, South Korea, the Middle East, and Africa.

To many, this exploitation of our culture by domestic imperialism may not seem very important, but it is of major importance. Because of technology, because of automation, machines and cybernetics, people will be liberated from long grueling hours of meaningless work, already there is talk of a 4 day work week. As people get more and more "free time" or "spare time", culture will play a primary role, as people begin to use this liberated time more and more time and energy will be devoted to cultural activity. As the people who participate in and make up the new culture engage in struggle, the culture takes a more progressive trend, in time it becomes righteously anti-imperialist, racist, and antisexist, it becomes the deadly enemy of mother country imperialist culture, If imperialist control the culture they control the people.

The most blatant example of domestic imperialism and exploitation of our colony is the music industry. The musicians/people make the music, they are the workers who produce our natural resource, but the imperialist class control the means of production, i.e., the record companies, studios, pressing plants, printing plants for album covers and distribution. The workers, the musicians/people, have no control over the means of production, our raw materials and natural resources are stolen from us, produced in the mother country and sold back to us. The Rainbow Colony then becomes an open market for mother country finished products. Again, if the imperialists control the culture they control the people.

We could go on and point out books and movies and clothing styles that we ourselves create but that are stolen from us by those who control the means of production. All this to say this, we are a People because of our culture, we are a colony because of our economic exploitation by the imperialists. With this understanding it is easier for us to determine our needs and desires.

The overall pressing need for the people of the Rainbow Colony is for National Liberation, to liberate the colony from the control and exploitation of the mother country imperialist class. The need is for self-determination, to determine for ourselves our own destinies, our own economic system, our own political system and our own culture. Our need is to build a community, "...a comprehensive collection of institutions that will deliver our whole lives...". Institutions that will only answer our most basic needs, institutions that are created by us and that are controlled by us.

The overall differences between Peoples institutions and pig institutions is that the people themselves rise up and create the institutions, and these agencies are solely under the peoples control and only in the service of the people, to answer their needs and desires.

All Power to the People!
Self-determination to the People of the Rainbow Colony!
Pun Plamondon
Central Committee
Rainbow People's Party