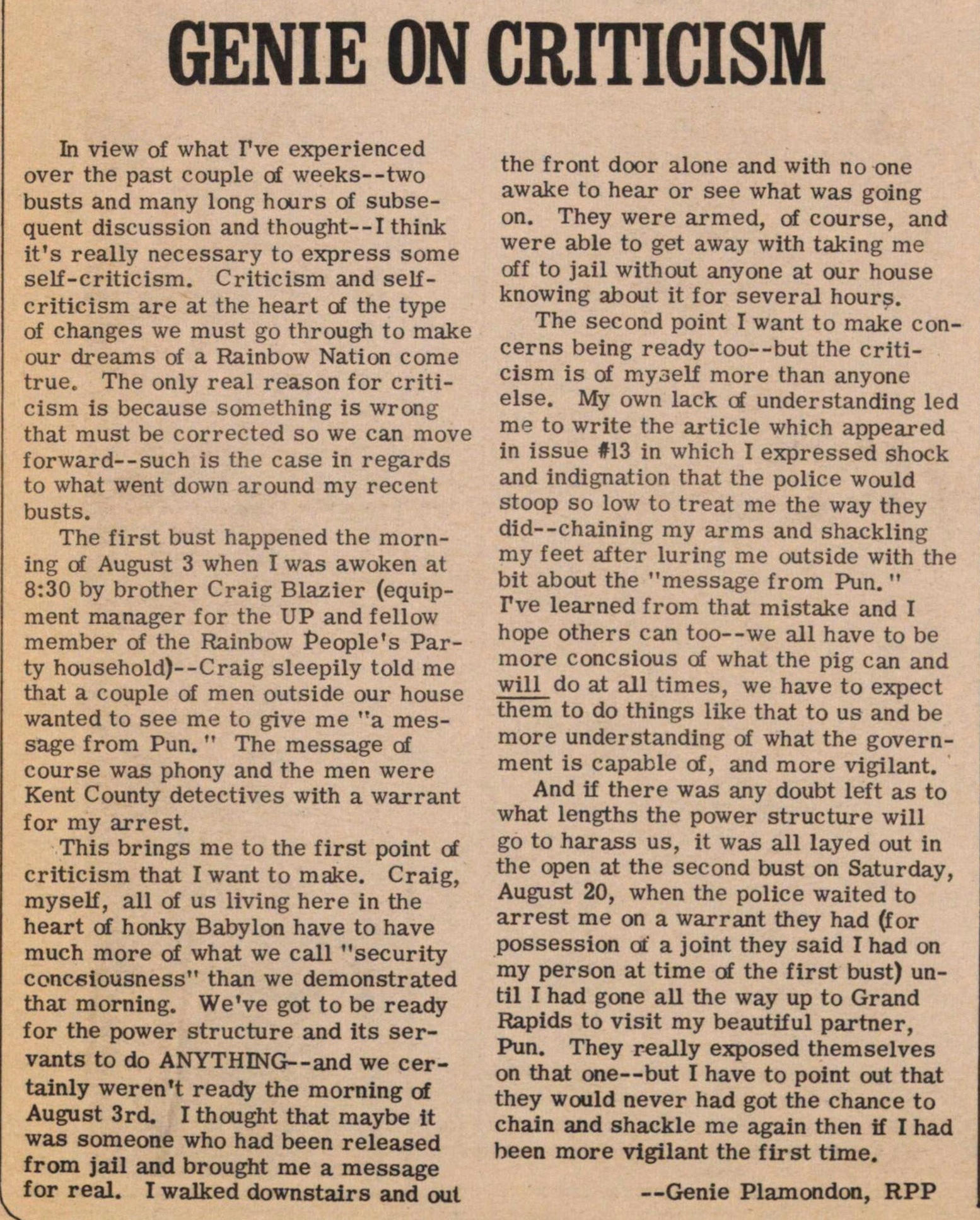 In view of what I've experienced over the past couple of weeks – two busts and many long hours of subsequent discussion and thought – I think it's really necessary to express some self-criticism. Criticism and self-criticism are at the heart of the type of changes we must go through to make our dreams of a Rainbow Nation come true. The only real reason for criticism is because something is wrong that must be corrected so we can move forward – such is the case in regards to what went down around my recent busts.

The first bust happened the morning of August 3 when I was awoken at 8:30 by brother Craig Blazier (equipment manager for the UP and fellow member of the Rainbow People's Party household) – Craig sleepily told me that a couple of men outside our house wanted to see me to give me "a message from Pun. " The message of course was phony and the men were Kent County detectives with a warrant for my arrest.

This brings me to the first point of criticism that I want to make. Craig, myself, all of us living here in the heart of honky Babylon have to have much more of what we call "security consciousness" than we demonstrated that morning. We've got to be ready for the power structure and its servants to do ANYTHING – and we certainly weren't ready the morning of August 3rd. I thought that maybe it was someone who had been released from jail and brought me a message for real. I walked downstairs and out the front door alone and with no one awake to hear or see what was going on. They were armed, of course, and were able to get away with taking me off to jail without anyone at our house knowing about it for several hours.

The second point I want to make concerns being ready too – but the criticism is of myself more than anyone else. My own lack of understanding led me to write the article which appeared in issue #13 in which I expressed shock and indignation that the police would stoop so low to treat me the way they did – chaining my arms and shackling my feet after luring me outside with the bit about the "message from Pun. " I've learned from that mistake and I hope others can too – we all have to be more conscious of what the pig can and will do at all times; we have to expect them to do things like that to us and be more understanding of what the government is capable of, and more vigilant.

And if there was any doubt left as to what lengths the power structure will go to harass us, it was all laid out in the open at the second bust on Saturday, August 20, when the police waited to arrest me on a warrant they had (for possession of a joint they said I had on my person at time of the first bust) until I had gone all the way up to Grand Rapids to visit my beautiful partner, Pun. They really exposed themselves on that one – but I have to point out that they would never had got the chance to chain and shackle me again then if I had been more vigilant the first time.