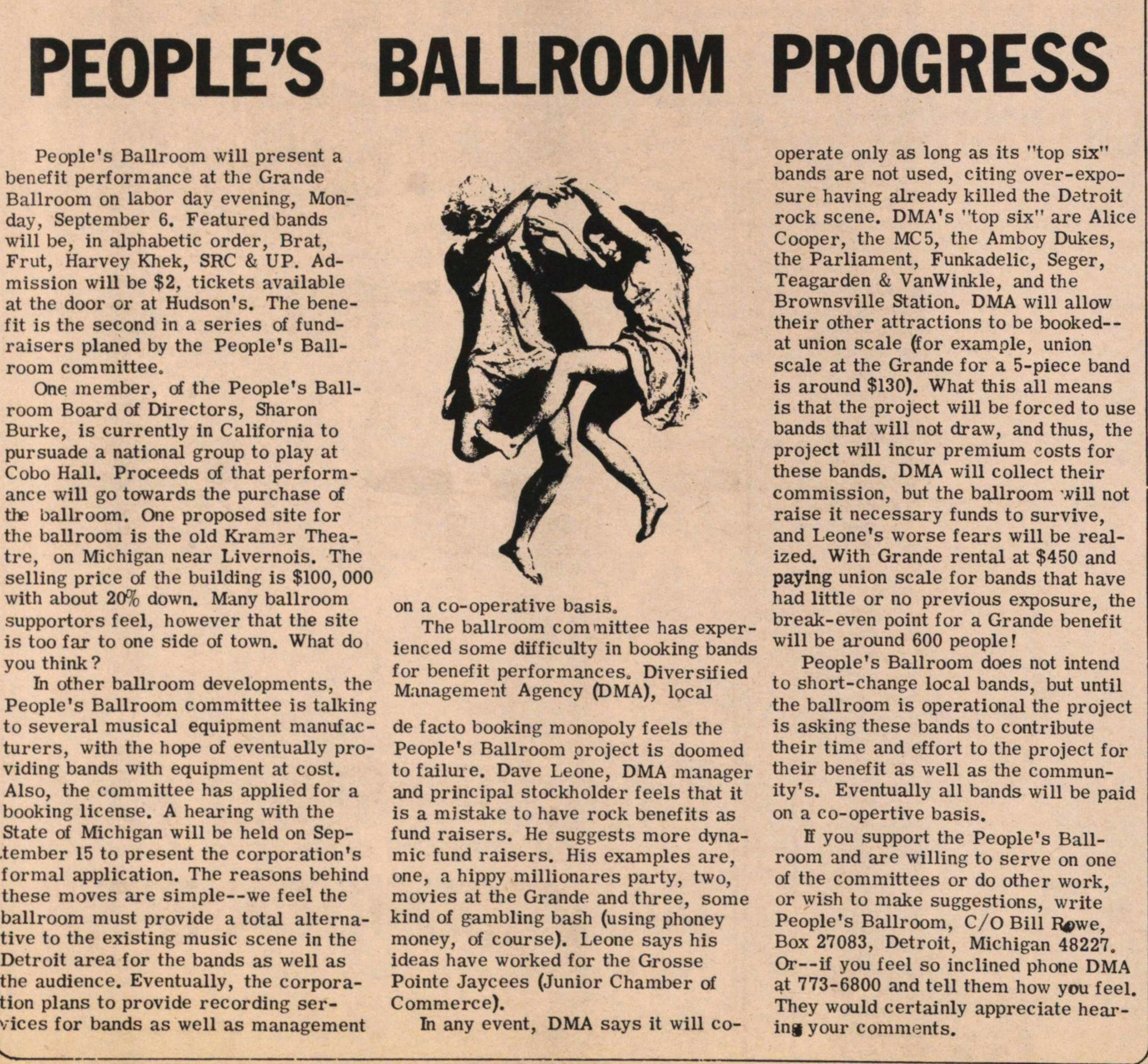 People's Ballroom will present a benefit performance at the Grande Ballroom on labor day evening, Monday, September 6. Featured bands will be, in alphabetical order, Brat, Frut, Harvey Khek, SRC & UP. Admission will be $2, tickets available at the door or at Hudson's. The benefit is the second in a series of fundraisers planned by the People's Ballroom committee.

One member, of the People's Ballroom Board of Directors, Sharon Burke, is currently in California to persuade a national group to play at Cobo Hall. Proceeds of that performance will go towards the purchase of the ballroom. One proposed site for the ballroom is the old Kramer Theatre, on Michigan near Livernois. The selling price of the building is $100,000 with about 20% down. Many ballroom supporters feel, however, that the site is too far to one side of town. What do you think?

In other ballroom developments, the People's Ballroom committee is talking to several musical equipment manufacturers, with the hope of eventually providing bands with equipment at cost. Also, the committee has applied for a booking license. A hearing with the State of Michigan will be held on September 15 to present the corporations formal application. The reasons behind these moves are simple--we feel the ballroom must provide a total alternative to the existing music scene in the Detroit area for the bands as well as the audience. Eventually, the corporation plans to provide recording services for bands as well as management on a co-operative basis.

The ballroom committee has experienced some difficulty in booking bands for benefit performances. Diversified Management Agency (DMA), local de facto booking monopoly feels the People's Ballroom project is doomed to failure. Dave Leone DMA manager and principal stockholder feels that it is a mistake to have rock benefits as fund raisers. He suggests more dynamic fund raisers. His examples are, one, a hippy millionaires party, two, movies at the Grande, and three, some kind of gambling bash (using phoney money, of course). Leone says his ideas have worked for the Grosse Point Jaycees (Junior Chamber of Commerce).

In any event, DMA says it will co-operate only as long as its "top six" bands are not used, citing over-exposure having already killed the Detroit rock scene. DMA's "top six" are Alice Cooper, MC5, the Amboy Dukes, the Parliament, Funkadelic, Seger, Teagarden & VanWinkle, and the Brownsville Station. DMA will allow their other attractions to be booked--at union scale (for example, union scale at the Grande for a 5-piece band is around $130). What this all means is that the project will be forced to use bands that will not draw, and thus, the project will incur premium costs for these bands, DMA will collect their commission, but the ballroom will not raise it necessary funds to survive, and Leone's worse fears will be realized. With Grande rental at $450 and paying union scale for bands that have had little or not previous exposure, the break-even point for a Grande benefit will be around 600 people!

People's Ballroom does not intend to short-change local bands, but until the ballroom is operational the project is asking these bands to contribute their time and effort to the project for their benefit as well as the community's. Eventually all bands will be paid on a co-operative basis. If you support the People's Ballroom and are willing to serve on one of the committees or do other work, or wish to make suggestions, write People's Ballroom, C/O Bill Rowe, Box 27083, Detroit, Michigan 48227. Or--if you feel so inclined phone DMA at 773-6800 and tell them how you feel. They would certainly appreciate hearing your comments.