The Days Of Marijuana Repression Are Numbered... 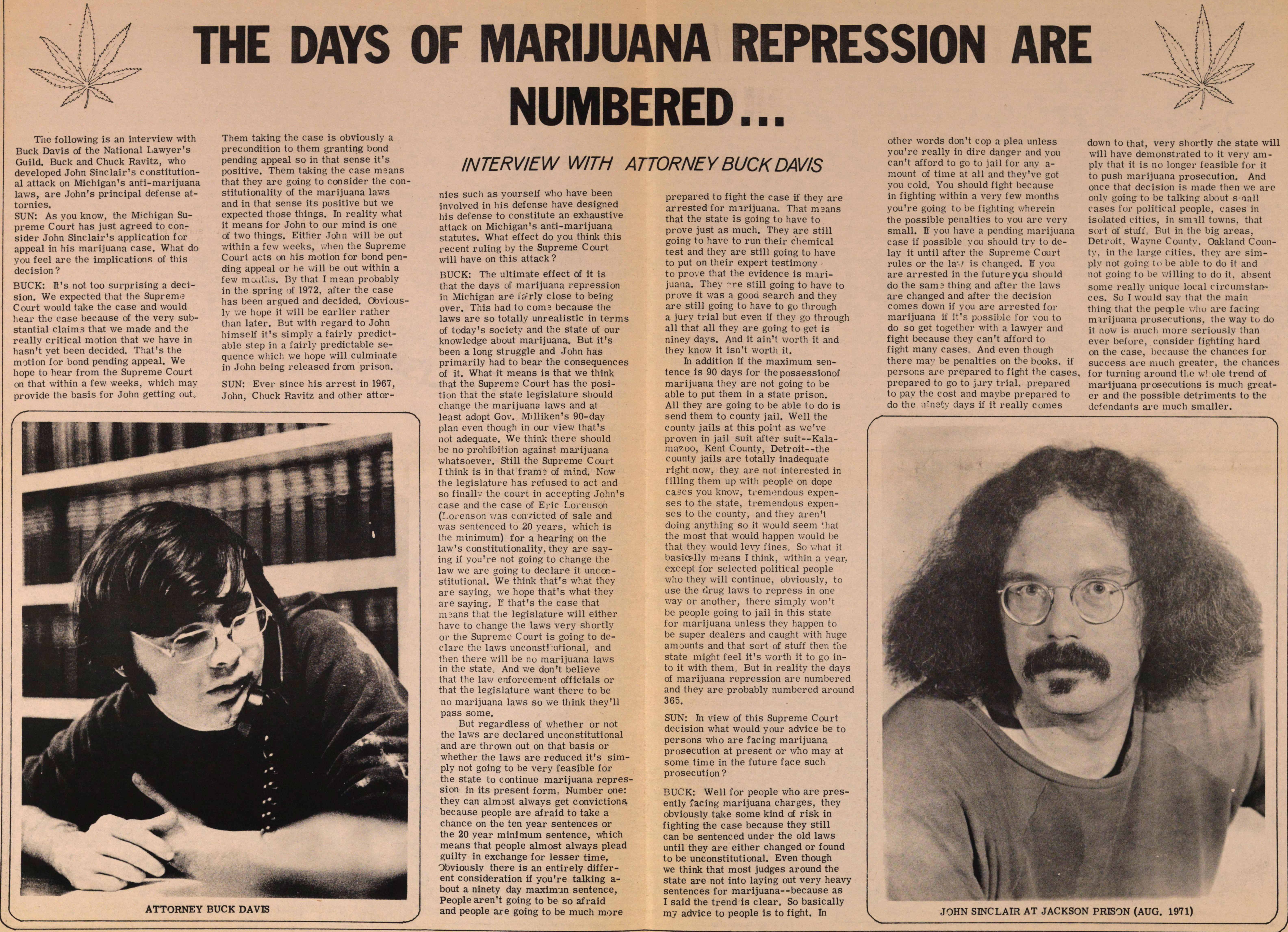 The following is an interview with Buck Davis of the National Lawyer's Guild. Buck and Chuck Ravitz, who developed John Sinclair's constitutional attack on Michigan's anti-marijuana laws, are John's principal defense attorneys.

SUN: As you know, the Michigan Supreme Court has just agreed to consider John Sinclair's application for appeal in his marijuana case. What do you feel are the implications of this decision?

BUCK: It's not too surprising a decision. We expected that the Supreme Court would take the case and would hear the case because of the very substantial claims that we made and the really critical motion that we have in hasn't yet been decided. That's the motion for bond pending appeal. We hope to hear from the Supreme Court on that within a few weeks, which may provide the basis for John getting out. Them taking the case is obviously a precondition to them granting bond pending appeal so in that sense it's positive. Them taking the case means that they are going to consider the constitutionality of the marijuana laws and in that sense its positive but we expected those things. In reality what it means for John to our mind is one of two things. Either John will be out within a few weeks, when the Supreme Court acts on his motion for bond pending appeal or he will be out within a few months. By that I mean probably in the spring of 1972, after the case has been argued and decided. Obviously we hope it will be earlier rather than later. But with regard to John himself it's simply a fairly predictable step in a fairly predictable sequence which we hope will culminate in John being released from prison.

SUN: Ever since his arrest in 1967, John, Chuck Ravitz and other attorneys such as yourself who have been involved in his defense have designed his defense to constitute an exhaustive attack on Michigan's anti-marijuana statutes. What effect do you think this recent ruling by the Supreme Court will have on this attack?

BUCK: The ultimate effect of it is that the days of marijuana repression in Michigan are fairly close to being over. This had to come because the laws are so totally unrealistic in terms of today's society and the state of our knowledge about marijuana. But it's been a long struggle and John has primarily had to bear the consequences of it. What it means is that we think that the Supreme Court has the position that the state legislature should change the marijuana laws and at least adopt Gov. Milliken's 90-day plan even though in our view that's not adequate. We think there should be no prohibition against marijuana whatsoever. Still the Supreme Court I think is in that frame of mind. Now the legislature has refused to act and so finally the court in accepting John's case and the case of Eric Lorenson (Lorenson was conficted of sale and was sentenced to 20 years, which is the minimum) for a hearing on the law's constitutionality, they are saying if you' re not going to change the law we are going to declare it unconstitutional. We think that's what they are saying. We hope that's what they are saying. If that's the case that means that the legislature will either have to change the laws very shortly or the Supreme Court is going to declare the laws unconstitutional, and then there will be no marijuana laws in the state. And we don't believe that the law enforcement officials or that the legislature want there to be no marijuana laws so we think they'll pass some.

In addition if the maximum sentence is 90 days for the possession of marijuana they are not going to be able to put them in a state prison. All they are going to be able to do is send them to county jail. Well the county jails at this point as we've proven in jail suit after suit--Kalamazoo, Kent County, Detroit--the county jails are totally inadequate right now, they are not interested in filling them up with people on dope cases you know, tremendous expenses to the state, tremendous expenses to the county, and they aren't doing anything so it would seem that the most that would happen would be that they would levy fines. So what it basically means I think, within a year, except for selected political people who they will continue, obviously, to use the drug laws to repress in one way or another, there simply won't be people going to jail in this state for marijuana unless they happen to be super dealers and caught with huge amounts and that sort of stuff then the state might feel it's worth it to go into it with them, But in reality the days of marijuana repression are numbered and they are probably numbered around 365.

SUN: In view of this Supreme Court decision what would your advice be to persons who are facing marijuana prosecution at present or who may at some time in the future face such prosecution?

BUCK: Well for people who are presently acing marijuana charges, they obviously take some kind of risk in fighting the case because they still can be sentenced under the old laws until they are either changed or found to be unconstitutional. Even though we think that most judges around the state are not into laying out very heavy sentences for marijuana--because as I said the trend is clear. So basically my advice to people is to fight. In other words don't cop a plea unless you're really In dire danger and you can't afford to go to jail for any amount of time at all and they've got you cold. You should fight because in fighting within a very few months you're going to be fighting wherein the possible penalties to you are very small. If you have a pending marijuana case if possible you should try to delay it until after the Supreme Court rules or the law is changed. If you are arrested in the future you should do the same thing and after the laws are changed and after the decision comes down if you are arrested for marijuana if it's possible for you to do so get together with a lawyer and fight because they can't afford to fight many cases. And even though there may be penalties on the books, if persons are prepared to fight the cases, prepared to go to jury trial, prepared to pay the cost and maybe prepared to do the ninety days if it really comes down to that, very shortly the state will will have demonstrated to it very amply that it is no longer feasible for it to push marijuana prosecution. And once that decision is made then we are only going to be talking about small cases for political people, cases in isolated cities, in small towns, that sort of stuff. But in the big areas, Detroit, Wayne County, Oakland County. in the large cities, they are simply not going to be able to do it and not going to be willing to do it, absent some really unique local circumstances. So I would say that the main thing that the people who are facing marijuana prosecutions, the way to do it now is much more seriously than ever before, consider fighting hard on the case, because the chances for success are much greater, the chances for turning around the whole trend of marijuana prosecutions is much greater and the possible detriments to the defendants are much smaller.