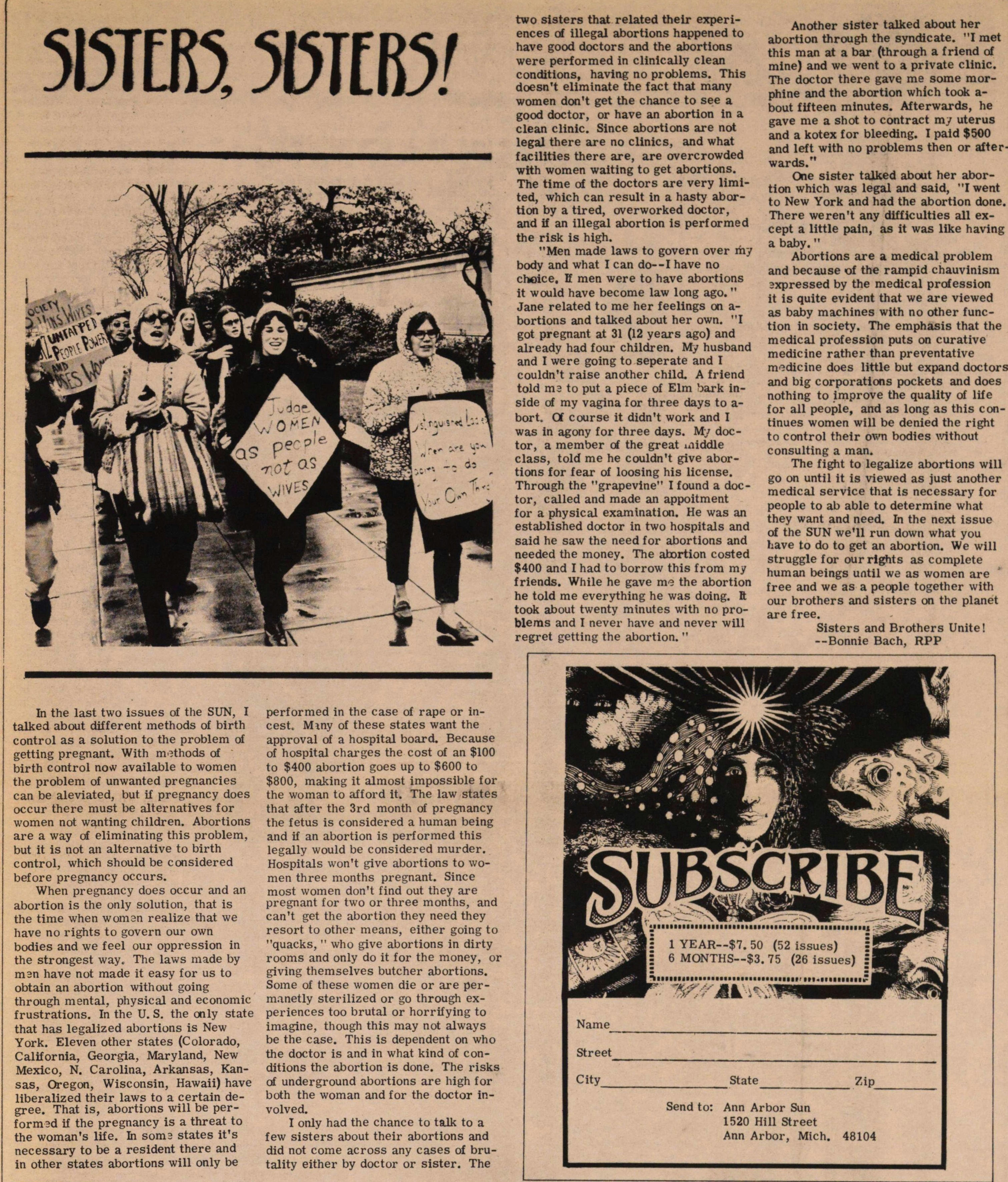 In the last two issues of the SUN, I talked about different methods of birth control as a solution to the problem of getting pregnant. With methods of birth control now available to women the problem of unwanted pregnancies can be alleviated, but if pregnancy does occur there must be alternatives for women not wanting children. Abortions are a way of eliminating this problem, but it is not an alternative to birth control, which should be considered before pregnancy occurs.

When pregnancy does occur and an abortion is the only solution, that is the time when woman realize that we have no rights to govern our own bodies and we feel our oppression in the strongest way. The laws made by men have not made it easy for us to obtain an abortion without going through mental, physical and economic frustrations. In the U.S. the only state that has legalized abortions is New York. Eleven other states (Colorado, California, Georgia, Maryland, New Mexico, N. Carolina, Arkansas, Kansas, Oregon, Wisconsin, Hawaii) have liberalized their laws to a certain degree. That is, abortions will be performed if the pregnancy is a threat to the woman's life. In some states it's necessary to be a resident there and in other states abortions will only be performed in the case of rape or incest. Many of these states want the approval of a hospital board. Because of hospital charges the cost of an $100 to $400 abortion goes up to $600 to $800, making it almost impossible for the woman to afford it. The law states that after the 3rd month of pregnancy the fetus is considered a human being and if an abortion is performed this legally would be considered murder. Hospitals won't give abortions to women three months pregnant. Since most women don't find out they are pregnant for two or three months, and can't get the abortion they need they resort to other means, either going to "quacks, " who give abortions in dirty rooms and only do it for the money, or giving themselves butcher abortions. Some of these women die or are permanently sterilized or go through experiences too brutal or horrifying to imagine, though this may not always be the case. This is dependent on who the doctor is and in what kind of conditions the abortion is done. The risks of underground abortions are high for both the woman and for the doctor involved.

I only had the chance to talk to a few sisters about their abortions and did not come across any cases of brutality either by doctor or sister. The two sisters that related their experiences of illegal abortions happened to have good doctors and the abortions were performed in clinically clean conditions, having no problems. This doesn't eliminate the fact that many women don't get the chance to see a good doctor, or have an abortion in a clean clinic. Since abortions are not legal there are no clinics, and what facilities there are, are overcrowded with women waiting to get abortions. The time of the doctors are very limited, which can result in a hasty abortion by a tired, overworked doctor, and if an illegal abortion is performed the risk is high.

"Men made laws to govern over my body and what I can do - I have no choice. E men were to have abortions it would have become law long ago. " Jane related to me her feelings on abortions and talked about her own. "I got pregnant at 31 (12 years ago) and already had four children. My husband and I were going to separate and I couldn't raise another child. A friend told ma to put a piece of Elm bark inside of my vagina for three days to abort. Of course it didn't work and I was in agony for three days. My doctor, a member of the great middle class, told me he couldn't give abortions for fear of loosing his license. Through the "grapevine" I found a doctor, called and made an appointment

for a physical examination. He was an established doctor in two hospitals and said he saw the need for abortions and needed the money. The abortion costed $400 and I had to borrow this from my friends. While he gave m the abortion he told me everything he was doing. It took about twenty minutes with no problems and I never have and never will regret getting the abortion. "

Another sister talked about her abortion through the syndicate. "I met this man at a bar (through a friend of mine) and we went to a private clinic. The doctor there gave me some morphine and the abortion  took about fifteen minutes. Afterwards, he gave me a shot to contract my uterus and a pad for bleeding. I paid $500 and left with no problems then or afterwards"

One sister talked about her abortion which was legal and said, "I went to New York and had the abortion done. There weren't any difficulties all except a little pain, as it was like having a baby. "

Abortions are a medical problem and because of the chauvinism expressed by the medical profession it is quite evident that we are viewed as baby machines with no other function in society. The emphasis that the medical profession puts on curative medicine rather than preventative medicine does little but expand doctors and big corporations pockets and does nothing to improve the quality of life for all people, and as long as this continues women will be denied the right to control their own bodies without Consulting a man.

The fight to legalize abortions will go on until it is viewed as just another medical service that is necessary for people to be able to determine what they want and need. In the next issue of the SUN we' ll run down what you have to do to get an abortion. We will struggle for our rights as complete human beings until we as women are free and we as a people together with our brothers and sisters on the planet are free.