"down The Halls And Into The Street..." 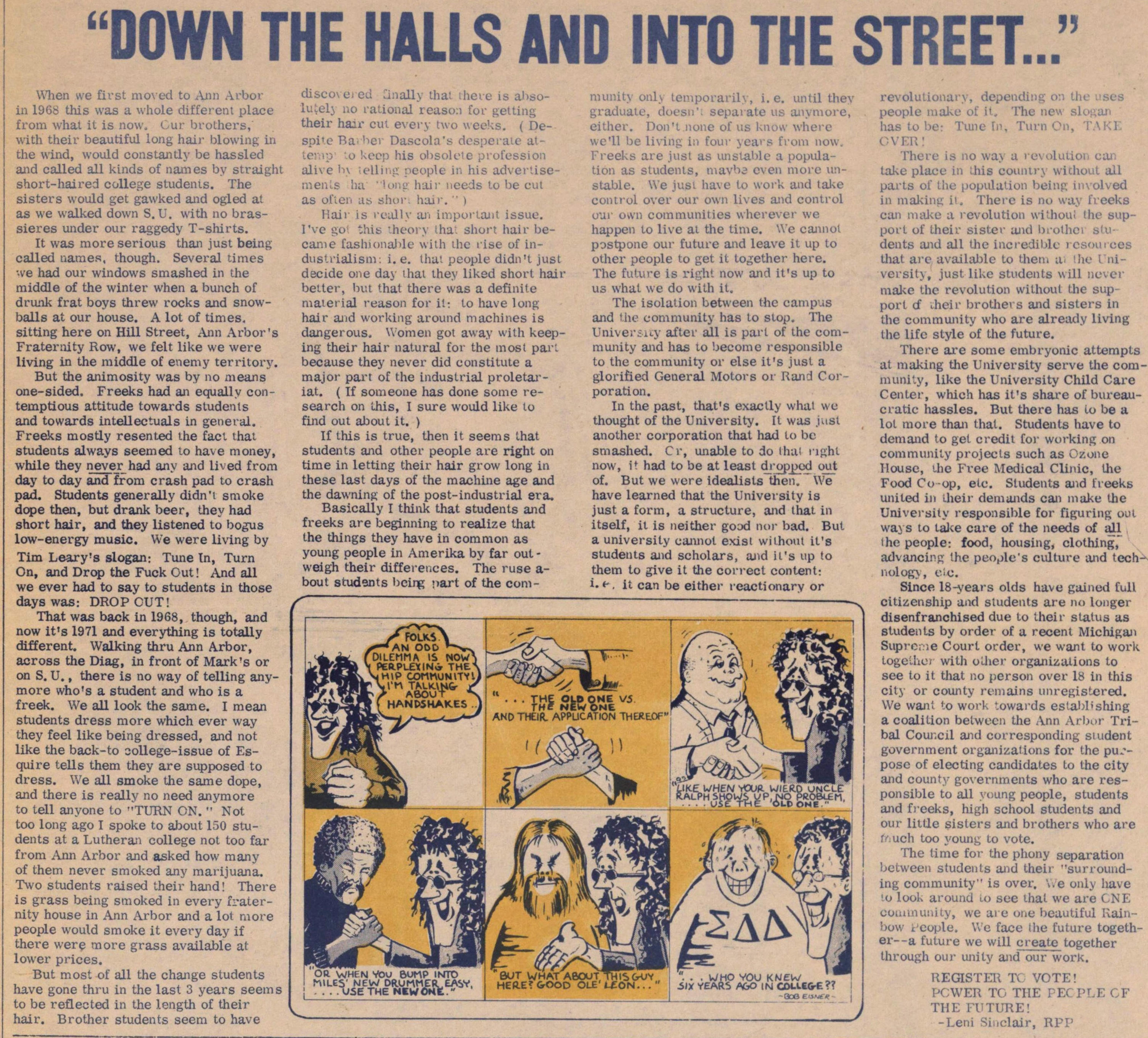 "DOWN THE HALLS AND INTO THE STREET"

When we first moved to Ann Arbor in 1968 this was a whole different place from what it is now. Our brothers, with their beautiful long hair blowing in the wind, would constantly be hassled and called all kinds of names by straight short-haired college students. The sisters would get gawked and ogled at as we walked down S.U. with no brassieres under our raggedy T-shirts.

It was more serious than just being called names, though. Several times we had our Windows smashed in the middle of the winter when a bunch of drunk frat boys threw rocks and snowballs at our house. A lot of times, sitting here on Hill Street, Ann Arbor's Fraternity Row, we felt like we were living in the middle of enemy territory.

But the animosity was by no means one-sided. Freeks had an equally contemptious attitude towards students and towards intellectuals in general. Freeks mostly resented the fact that students always seemed to have money, while they never had any and lived from day to day and from crash pad to crash pad. Students generally didn't smoke dope then, but drank beer, they had short hair, and they listened to bogus low-energy music. We were living by Tim Leary's slogan: Tune In, Turn On, and Drop the Fuck Out! And all we ever had to say to students in those day s was: DROP OUT!

That was back in 1968, though, and now it's 1971 and everything is totally different. Walking thru Ann Arbor, across the Diag, in front of Mark 's or on S. U. , there is no way of telling anymore who's a student and who is a freek. We all look the same. I mean students dress more which ever way they feel like being dressed, and not like the back-to-college-issue of Esquire tells them they are supposed to dress. We all smoke the same dope, and there is really no need anymore to tell anyone to "TURN ON. " Not too long ago I spoke to about 150 students at a Lutheran college not too far from Ann Arbor and asked how many of them never smoked any marijuana. Two students raised their hand! There is grass being smoked in every fraternity house in Ann Arbor and a lot more people would smoke it every day if there were more grass available at lower prices.

But most of all the change students have gone thru in the last 3 years seems to be reflected in the length of their hair. Brother students seem to have discovered finally that there is absolutely no reason for getting their hair cut every two weeks. (Despite Barber Dascola's desperate attempt to keep his obsolete profession alive by telling people in his advertisements that "long hair needs to be cut as often as short hair.")

Hair is really an important issue.  I've got this theory that short hair became fashionable with the rise of industrialism: i.e. that people didn't just decide one day ihai they liked short hair better, but that there was a definite reason for it: to have long hair and working around machines is dangerous. Women got away with keeping their hair natural for the most part because they never did constitute a major part of the industrial proletariat. (If someone has done some research on this, I sure would like to find out about it.)

If this is true, then it seems that students and other people are right on time in letting their hair grow long in these last days of the machine age and the dawning of the industrial era.

Basically I think that students and freeks are beginning to realize that the things they have in common as young people in Amerika by far outweigh their differences. The ruse about students being part of the community only temporarily, i. e. until they graduate, doesn't separate us anymore, either. Don't none of us know where we'll be living four years from now. Freeks are just as unstable a population as students, maybe even more unstable. We just have to work and take control over our own lives and control our own communities wherever we happen to live at the time. We cannot postpone our future and leave it up to other people to get it together here. The future is right now and it's up to us what we do with it.

The isolation between the campus and the community has to stop. The University after all is part of the community and has to become responsible to the community or else it's just a glorified General Motors or Rand Corporation.

In the past, that's exactly what we thought of the University. It was just another corporation that had to be smashed. Or, unable to do that right now, if had to be at least dropped out of. But we were idealists then. We have learned that the University is just a form, a structure, and that in itself, it is neither good nor bad. But a university cannot exist without it's students and scholars, and it's up to them to give it the correct content: i.e. it can be either reactionary or revolutionary, depending on the uses people make of it. The new slogan has to be: Tune In, Turn On, TAKE OVER!

There is no way a revolution can take place in this country without all parts of the population being involved in making it.  There is no way freeks can make a revolution without the support of their sister and brother students and all the incredible resources that are available to them at the University, just like students will never make the revolution without the support if their brothers and sisters in the community who are already living the life style of the future.

There are some embryonic attempts at making the University serve the community, like the University Child Care Center, which has it's share of bureaucratic hassles. But there has lo be a lot more than that. Students have to demand to get credit for working on community projects such as Ozone House, the Free Medical Clinic, the Food Coop, etc. Students and freeks united in their demands can make the University responsible for figuring out wavs to take care of the needs of all the people: food, housing, clothing, advancing the people's culture and technology, etc.

Since 18-years olds have gained full citizenship and students are no longer disenfranchised due to their status as students by order of a recent Michigan Supreme Court order, we want to work together with other organizations to see to it that no person over 18 in this city or county remains unregistered. We want to work towards establishing a coalition belween the Ann Arbor Tribal Council and corresponding student government organizations for the purpose of electing candidates to the city and county governments who are responsible to all young people, students and freeks, high school students and our little sisters and brothers who are much too young to vote.

The time for the phony separation between students and their "surrounding community" is over. We only have to look around to see that we are ONE community, we are one beautiful Rainbow People. We face the future together--a future we will create together through our unity and our work.

POWER TO THE PEOPLE OF THE FUTURE!