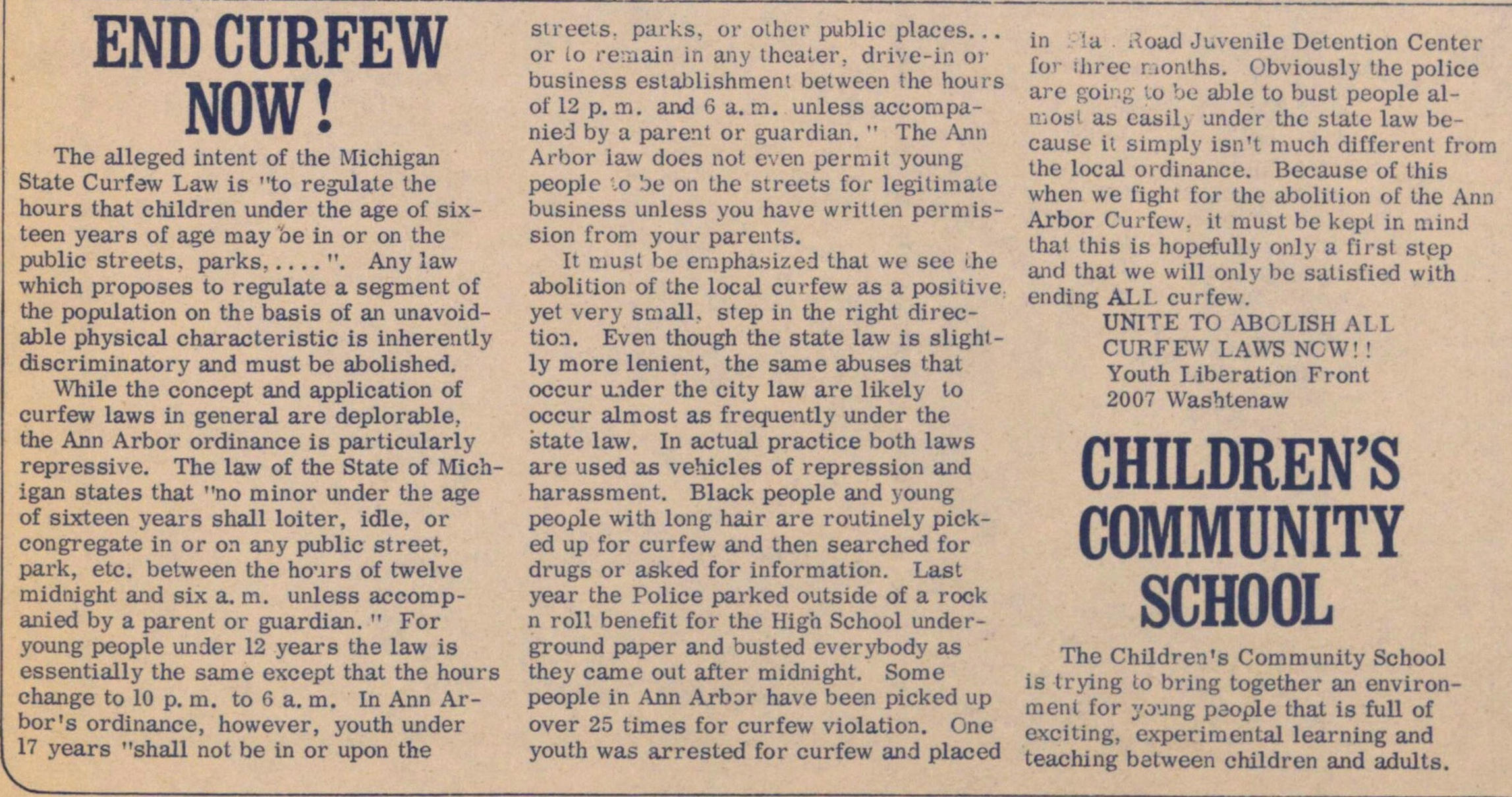 The alleged intent of the Michigan State Curfew Law is "to regulate the hours that children under the age of sixteen years of age may be in or on the public streets. parks....." Any law which proposes to regulate a segment of the population on the basis of an unavoidable physical characteristic is inherently discriminatory and must be abolished.

While the concept and application of curfew laws in general are deplorable, the Ann Arbor ordinance is particularly repressive. The law of the State of Michigan states that "no minor under the age of sixteen years shall loiter, idle, or congregate in or on any public street, park, etc. between the hours of twelve midnight and six a.m. unless accompanied by a parent or guardian." For young people under 12 years the law is essentially the same except that the hours change to 10 p. m. to 6 a.m. In Ann Arbor 's ordinance, however, youth under 17 years "shall not be in or upon the streets, parks, or other public places. . . or to remain in any theater, drive-in or business establishment between the hours of 12 p.m. and 6 a.m. unless accompanied by a parent or guardian." The Ann Arbor law does not even permit young people to be on the streets for legitimate business unless you have written permission from your parents.

It must be emphasized that we see the abolition of the local curfew as a positive yet very small step in the right direction. Even though the state law is slightly more lenient, the same abuses that occur under the city law are likely to occur almost as frequently under the state law. In actual practice both laws are used as vehicles of repression and harassment. Black people and young people with long hair are routinely picked up for curfew and then searched for drugs or asked for information. Last year the Police parked outside of a rock n roll benefit for the High School underground paper and busted everybody as they carne out after midnight. Some people in Ann Arbor have been picked up over 25 times for curfew violation. One youth was arrested for curfew and placed in Platt Road Juvenile Detention Center for three months.  Obviously the police are going to be able to bust people almost as easily under the state law because it simply isn't much different from the local ordinance. Because of this when we fight for the abolition of the Ann Arbor Curfew, it must be kept in mind that this is hopefully only a first step and that we will only be satisfied with ending ALL curfew.