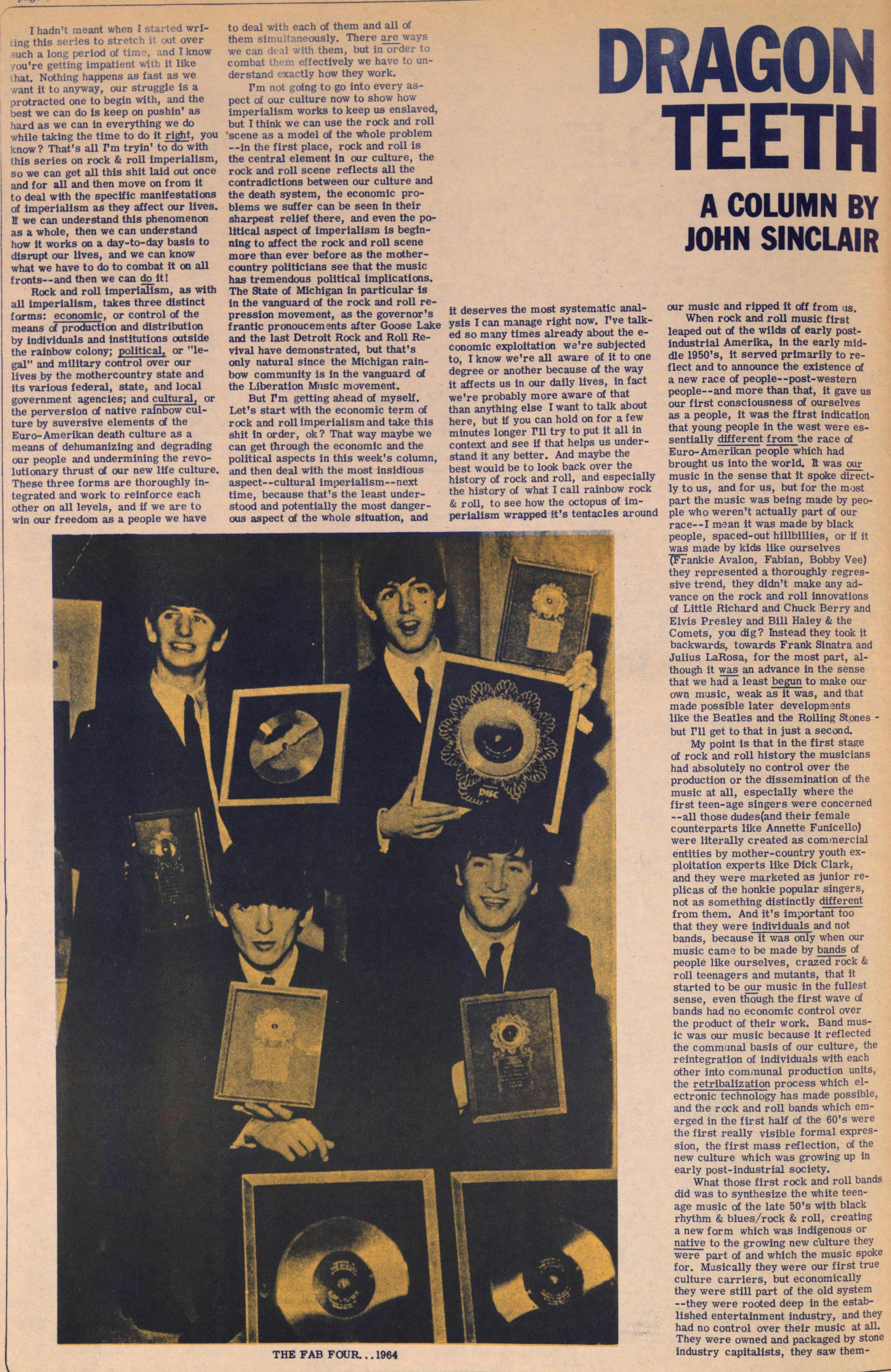 A COLUMN BY JOHN SINCLAIR

I hadn't meant when I started writing this series to stretch it out over such a long period of time, and I know you're getting impatient with it like that. Nothing happens as fast as we want it to anyway, our struggle is a protracted one to begin with, and the best we can do is keep on pushin' as hard as we can in everything we do while taking the time to do it right, you know? That's all I'm tryin' to do with this series on rock & roll imperialism, so we can get all this shit laid out once and for all and then move on from it to deal with the specific manifestations of imperialism as they affect our lives. If we can understand this phenomenon as a whole, then we can understand how it works on a day-to-day basis to disrupt our lives, and we can know what we have to do to combat it on all fronts-and then we can do it!

Rock and roll imperialism, as with all imperialism, takes three distinct forms: economic, or control of the means of production and distribution by individuals and institutions outside the rainbow colony; political, or "legal" and military control over our lives by the mothercountry state and its various federal, state, and local government agencies; and cultural, or the perversion of native rainbow culture by suversive elements of the Euro-Amerikan death culture as a means of dehumanizing and degrading our people and undermining the revolutionary thrust of our new life culture. These three forms are thoroughly integrated and work to reinforce each other on all levels, and if we are to win our freedom as a people we have to deal with each of them and all of them simultaneously. There are ways we can deal with them, but in order to combat them effectively we have to understand exactly how they work.

I'm not going to go into every aspect of our culture now to show how imperialism works to keep us enslaved, but I think we can use the rock and roll scene as a model of the whole problem--in the first place, rock and roll is the central element in our culture, the rock and roll scene reflects all the contradictions between our culture and the death system, the economic problems we suffer can be seen in their sharpest relief there, and even the political aspect of imperialism is beginning to affect the rock and roll scene more than ever before as the mothercountry politicians see that the music has tremendous political implications. The State of Michigan in particular is in the vanguard of the rock and roll repression movement, as the governor's frantic pronouncements after Goose Lake and the last Detroit Rock and Roll Revival have demonstrated, but that's only natural since the Michigan rainbow community is in the vanguard of the Liberation Music movement.

But I'm getting ahead of myself. Let's start with the economic term af rock and roll imperialism and take this shit in order, ok? That way maybe we can get through the economic and the political aspects in this week's column, and then deal with the most insidious aspect--cultural imperialism--next time, because that's the least understood and potentially the most dangerous aspect of the whole situation, and it deserves the most systematic analysis I can manage right now. I've talked so many times already about the economic exploitation we're subjected to, I know we're all aware of it to one degree or another because of the way it affects us in our daily lives, in fact we're probably more aware of that than anything else I want to talk about here, but if you can hold on for a few minutes longer I'll try to put it all in context and see if that helps us understand it any better. And maybe the best would be to look back over the history of rock and roll, and especially the history of what I cali rainbow rock & roll, to see how the octopus of imperialism wrapped it's tentacles around our music and ripped it off from us.

When rock and roll music first leaped out of the wilds of early postindustrial Amerika, in the early middle 1950's, it served primarily to reflect and to announce the existence of a new race of western people--and more than that, it gave us our first consciousness of ourselves as a people, it was the first indication that young people in the west were essentially different from the race of Euro-Amerikan people which had brought us into the world. It was our music in the sense that it spoke directly to us, and for us, but for the most part the music was being made by people who weren't actually part of our race--I mean it was made by black people, spaced-out hillbillies, or if it was made by kids like ourselves (Frankie Avalon, Fabian, Bobby Vee) they represented a thoroughly regressive trend, they didn't make any advance on the rock and roll innovations of Little Richard and Chuck Berry and Elvis Presley and Bill Haley & the Comets, you dig? Instead they took it backwards, towards Frank Sinatra and Julius LaRosa, for the most part, although it was an advance in the sense that we had a least begun to make our own music, weak as it was, and that made possible later developments like the Beatles and the Rolling Stones - but I'll get to that in just a second.

My point is that in the first stage of rock and roll history the musicians had absolutely no control over the production or the dissemination of the music at all, especially where the first teen-age singers were concerned--all those dudes (and their female counterparts like Annette Funicello) were literally created as commercial entities by mother-country youth exploitation experts like Dick Clark, and they were marketed as junior replicas of the honkie popular singers, not as something distinctly different from them. And it's important too that they were individuals and not bands, because it was only when our music carne to be made by bands of people like ourselves, crazed rock & roll teenagers and mutants, that it started to be our music in the fullest sense, even though the first wave of bands had no economic control over the product of their work. Band music was our music because it reflected the communal basis of our culture, the reintegration of individuals with each other into communal production units, the retribalization process which electronic technology has made possible, and the rock and roll bands which emerged in the first half of the 60's were the first really visible formal expression, the first mass reflection, of the new culture which was growing up in early industrial society.

What those first rock and roll bands did was to synthesize the white teenage music of the late 50's with black rhythm & blues/rock & roll, creating a new form which was indigenous or native to the growing new culture they were part of and which the music spoke for. Musically they were our first true culture carriers, but economically they were still part of the old system --they were rooted deep in the established entertainment industry, and they had no control over their music at all. They were owned and packaged by stone industry capitalists, they saw them