selves as pop stars and nothing more, th... 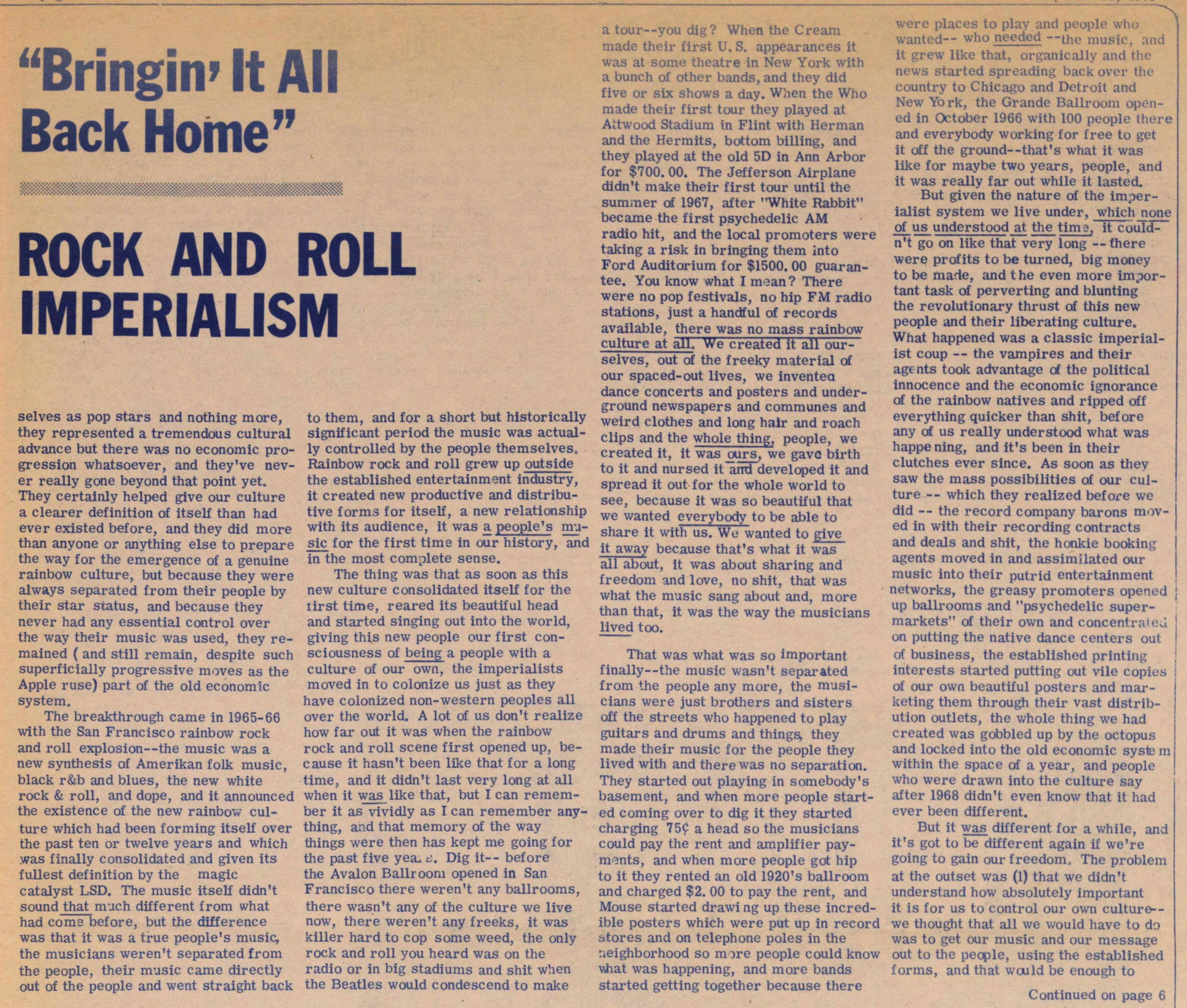 "Bringin' It All Back Home"

selves as pop stars and nothing more, they represented a tremendous cultural advance but there was no economic progression whatsoever, and they've never really gone beyond that point yet. They certainly helped give our culture a clearer definition of itself than had ever existed before, and they did more than anyone or anything else to prepare the way for the emergence of a genuine rainbow culture, but because they were always separated from their people by their star status, and because they never had any essential control over the way their music was used, they remained (and still remain, despite such superficially progressive moves as the Apple ruse) part of the old economic system.

The breakthrough came in 1965-66 with the San Francisco rainbow rock and roll explosion--the music was a new synthesis of Amerikan folk music, black r&b and blues, the new white rock & roll, and dope, and it announced the existence of the new rainbow culture which had been forming itself over the past ten or twelve years and which was finally Consolidated and given its fullest definition by the magic catalyst LSD. The music itself didn't sound that much different from what had come before, but the difference was that it was a true people 's music, the musicians weren't separated from the people, their music came directly out of the people and went straight back to them, and for a short but historically significant period the music was actually controlled by the people themselves. Rainbow rock and roll grew up outside the established entertainment industry, it created new productive and distributive forms for itself, a new relationship with its audience, it was a people's music for the first time in our history, and in the most complete sense.

The thing was that as soon as this new culture Consolidated itself for the first time, reared its beautiful head and started singing out into the world, giving this new people our first consciousness of being a people with a culture of our own, the imperialists moved in to colonize us just as they have colonized non-western peoples all over the world. A lot of us don't realize how far out it was when the rainbow rock and roll scene first opened up, because it hasn't been like that for a long time, and it didn't last very long at all when it was like that, but I can remember it as vividly as I can remember anything, and that memory of the way things were then has kept me going for the past five years. Dig it--before the Avalon Ballroom opened in San Francisco there weren't any ballrooms, there wasn't any of the culture we live now, there weren't any freeks, it was killer hard to cop some weed, the only rock and roll you heard was on the radio or in big stadiums and shit when the Beatles would condescend to make a tour--you dig? When the Cream made their first U.S. appearances it was at some theatre in New York with a bunch of other bands, and they did five or six shows a day. When the Who made their first tour they played at Attwood Stadium in Flint with Herman and the Hermits, bottom billing, and they played at the old 5D in Ann Arbor for $700.00. The Jefferson Airplane didn't make their first tour until the summer of 1967, after "White Rabbit" became the first psychedelic AM radio hit, and the local promoters were taking a risk in bringing them into Ford Auditorium for $1500.00 guarantee. You know what I mean? There were no pop festivals, no hip FM radio stations, just a handful of records available, there was no mass rainbow culture at all. We created it all ourselves, out of the freeky material of our spaced-out lives, we invented dance concerts and posters and underground newspapers and communes and weird clothes and long hair and roach clips and the whole thing, people, we created it, it was ours, we gave birth to it and nursed it and developed it and spread it out for the whole world to see, because it was so beautiful that we wanted everybody to be able to share it with us. We wanted to give it away because that's what it was all about, it was about sharing and freedom and love, no shit, that was what the music sang about and, more than that, it was the way the musicians lived too.

That was what was so important finally--the music wasn't separated from the people any more, the musicians were just brothers and sisters off the streets who happened to play guitars and drums and things, they made their music for the people they lived with and there was no separation. They started out playing in somebody's basement, and when more people started coming over to dig it they started charging 75 cents a head so the musicians could pay the rent and amplifier payments, and when more people got hip to it they rented an old 1920's ballroom and charged $2.00 to pay the rent, and Mouse started drawing up these incredible posters which were put up in record stores and on telephone poles in the neighborhood so more people could know what was happening, and more bands started getting together because there were places to play and people who wanted--who needed--the music, and it grew like that, organically and the news started spreading back over the country to Chicago and Detroit and New York, the Grande Ballroom opened in October 1966 with 100 people there and everybody working for free to get it off the ground--that's what it was like for maybe two years, people, and it was really far out while it lasted.

But given the nature of the imperialist system we live under, which none of us understood at the time, it couldn't go on like that very long--there were profits to be turned, big money to be made, and the even more important task of perverting and blunting the revolutionary thrust of this new people and their liberating culture. What happened was a classic imperialist coup--the vampires and their agents took advantage of the political innocence and the economic ignorance of the rainbow natives and ripped off everything quicker than shit, before any of us really understood what was happening, and it's been in their clutches ever since. As soon as they saw the mass possibilities of our culture -- which they realized before we dld -- the record company barons moved in with their recording contracts and deals and shit, the honkie booking agents moved in and assimilated our music into their putrid entertainment networks, the greasy promoters opened up ballrooms and "psychedelic supermarkets" of their own and concentrated on putting the native dance centers out of business, the established printing interests started putting out vile copies of our own beautiful posters and marketing them through their vast distribution outlets, the whole thing we had created was gobbled up by the octopus and locked into the old economic system within the space of a year, and people who were drawn into the culture say after 1968 didn't even know that it had ever been different.

But it was different for a while, and it's got to be different again if we're going to gain our freedom. The problem at the outset was (1) that we didn't understand how absolutely important it is for us to control our own culture - we thought that all we would have to do was to get our music and our message out to the people, using the established forms, and that would be enough to Continued on page 6