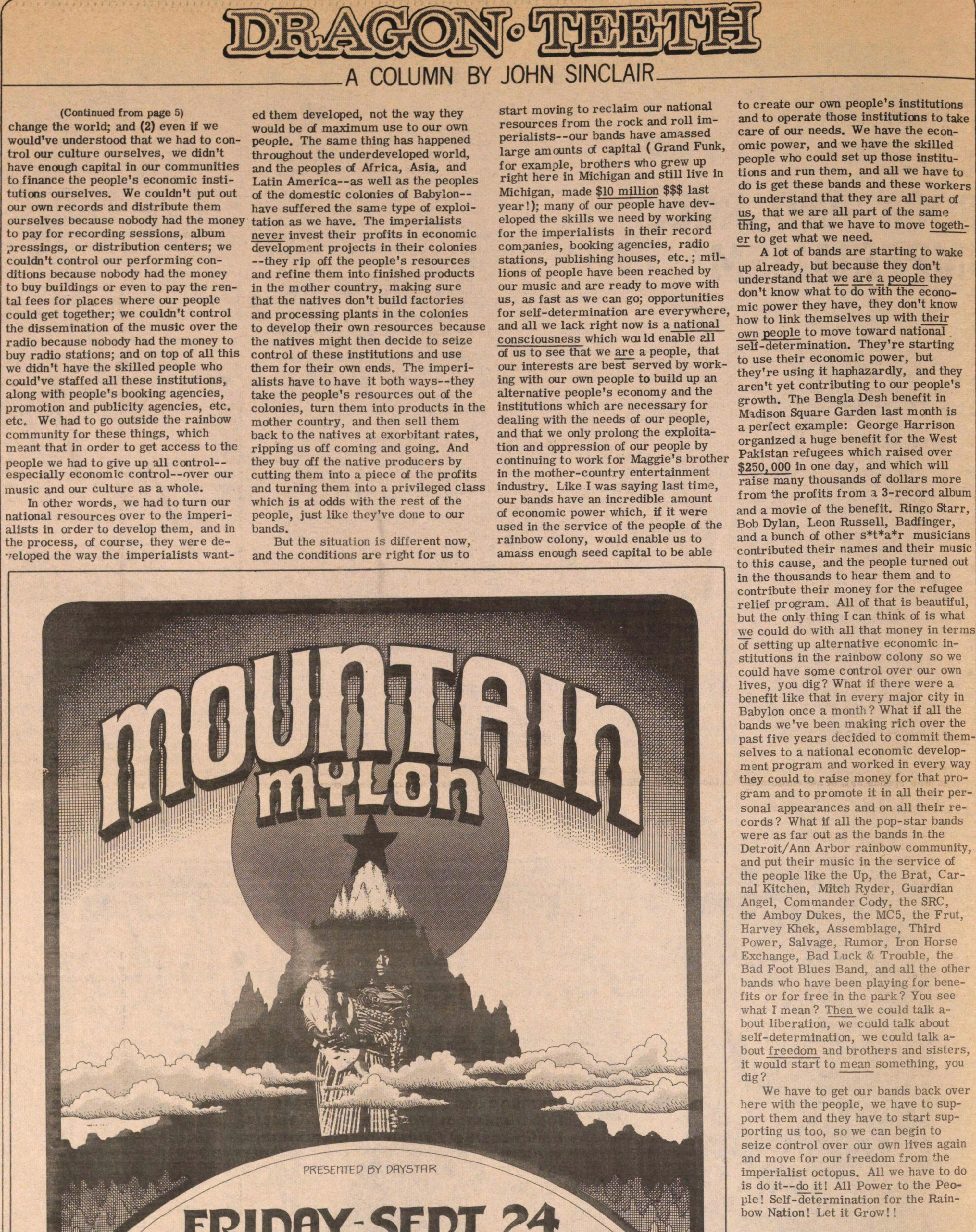 change the world; and (2) even if we would've understood that we had to control our culture ourselves, we didn't have enough capital in our communities to finance the people's economice institutions ourselves. We couldn't put out our own records and distribute them ourselves because nobody had the money to pay for recording sessions, album pressings, or distribution centers; we couldn't control our performing conditions because nobody had the money to buy buildings or even to pay the rental fees for places where our people could get together; we couldn't control the dissemination of the music over the radio because nobody had the money to buy radio stations; and on top of all this we didn't have the skilied people who could've staffed all these institutions, along with people's booking agencies, promotion and publicity agencies, etc. etc. We had to go outside the rainbow community for these things, which meant that in order to get access to the people we had to give up all control - especially economic control - over our music and our culture as a whole.

In other words, we had to turn our national resources over to the imperialists in order to develop them, and in the process, of course, they were developed the way the imperialists wanted them developed, not the way they would be of maximum use to our own people. The same thing has happened throughout the underdeveloped world, and the peoples of Africa, Asia, and Latin America -as well as the peoples of the domestic colonies of Babylon - have suffered the same type of exploitation as we have. The imperialists never invest their profits in economic development projects in their colonies - they rip off the people's resources and refine them into finished products in the mother country, making sure that the natives don't build factories and processing plants in the colonies to develop their own resources because the natives might then decide to seize control of these institutions and use them for their own ends. The imperialists have to have it both ways - they take the people's resources out of the colonies, turn them into products in the mother country, and then sell them back to the natives at exorbitant rates, ripping us off coming and going. And they buy off the native producers by cutting them into a piece of the profits and turning them into a privileged class which is at odds with the rest of the people, just like they've done to our bands.

But the situation is different now, and the conditions are right for us to start moving to reclaim our national resources from the rock and roll imperialists - our bands have amassed large amounts of capital (Grand Funk, for example, brothers who grew up right here in Michigan and still live in Michigan, made $10 million $$$ last year ); many of our people have developed the skills we need by working for the imperialists in their record companies, booking agencies, radio stations, publishing houses, etc ; millions of people have been reached by our music and are ready to move with us, as fast as we can go; opportunities for self-determination are everywhere, and all we lack right now is a national consciousness which would enable all of us to see that we are a people, that our interests are best served by working with our own people to build up an alternative people's economy and the institutions which are necessary for dealing with the needs of our people, and that we only prolong the exploitation and oppression of our people by continuing to work for Maggie's brother in the mother-country entertainment industry. Like I was saying last time, our bands have an incredible amount of economic power which, if it were used in the service of the people of the rainbow colony, would enable us to amass enough seed capital to be able to create our own people's institutions and to operate those institutions to take care of our needs. We have the economic power, and we have the skilled people who could set up those institutions and run them, and all we have to do is get these bands and these workers to understand that they are all part of us, that we are all part of the same thing, and that we have to move together to get what we need.

A lot of bands are starting to wake up already, but because they don't understand that we are a people they don't know what to do with the economic power they have, they don't know how to link themselves up with their own people to move toward national self-determination. They're starting to use their economic power, but they're using it haphazardly, and they aren't yet contributing to our people's growth. The Bengla Desh benefit in Madison Square Garden last month is a perfect example: George Harrison organized a huge benefit for the West Pakistan refugees which raised over $250, 000 in one day, and which will raise many thousands of dollars more from the profits from a 3-record album and a movie of the benefit. Ringo Starr, Bob Dylan, Leon Russell, Badfinger, and a bunch of other star musicians contributed their names and their music to this cause, and the people turned out in the thousands to hear them and to contribute their money for the refugee relief program. All of that is beautiful, but the only thing I can think of is what we could do with all that money in terms of setting up alternative economic institutions in the rainbow colony so we could have some control over our own lives, you dig? What if there were a benefit like that in every major city in Babylon once a month ? What if all the bands we've been making rich over the past five years decided to commit themselves to a national economi  development program and worked in every way they could to raise money for that program and to promote it in all their personal appearances and on all their records? What if all the pop-star bands were as far out as the bands in the Detroit/Ann Arbor rainbow community, and put their music in the service of the people like the Up, the Brat, Carnal Kitchen, Mitch Ryder, Guardian Angel, Commander Cody, the SRC, the Amboy Dukes, the MC5, the Frut, Harvey Khek, Assemblage, Third Power, Salvage, Rumor, Iron Horse Exchange, Bad Luck & Trouble, the Bad Foot Blues Band, and all the other bands who have been playing for benefits or for free in the park? You see what I mean? Then we could talk about liberation, we could talk about self-determination, we could talk about freedom and brothers and sisters, it would start to mean something, you dig?

We have to get our bands back over here with the people, we have to support them and they have to start supporting us too, so we can begin to seize control over our own lives again and move for our freedom from the imperialist octopus. All we have to do is do it - do it! All Power to the People! Self-determination for the Rainbow Nation! Let it Grow!!