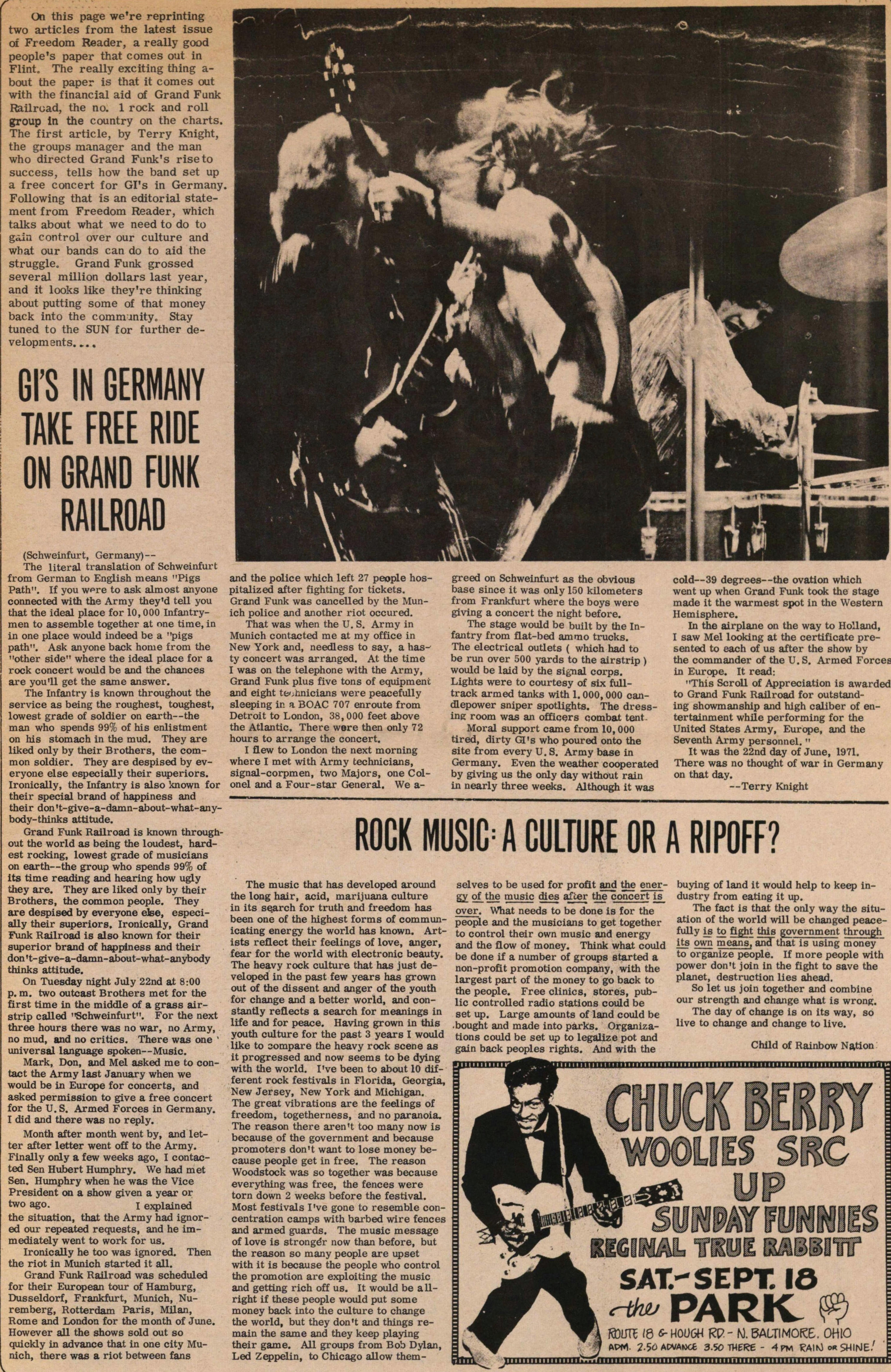 On this page we're reprinting two articles from the latest issue of Freedom Reader, a really good people's paper that comes out in Flint. The really exciting thing about the paper is that it comes out with the financial aid of Grand Funk Railroad, the no. 1 rock and roll group in the country on the charts. The first article, by Terry Knight, the groups manager and the man who directed Grand Funk's rise to success, tells how the band set up a free concert for GI's in Germany. Following that is an editorial statement from Freedom Reader, which talks about what we need to do to gain control over our culture and what our bands can do to aid the struggle. Grand Funk grossed several million dollars last year, and it looks like they're thinking about putting some of that money back into the community. Stay tuned to the SUN for further developments....

The literal translation of Schweinfurt from German to English means "Pigs Path". If you were to ask almost anyone connected with the Army they'd tell you that the ideal place for 10,000 Infantrymen to assemble together at one time, in in one place would indeed be a "pigs path". Ask anyone back home from the "other side" where the ideal place for a rock concert would be and the chances are you'll get the same answer. The Infantry is known throughout the service as being the roughest, toughest, lowest grade of soldier on earth - the man who spends 99% of his enlistment on his stomach in the mud. They are liked only by their Brothers, the common soldier. They are despised by everyone else especially their superiors. Ironically, the Infantry is also known for their special brand of happiness and their don't-give-a-damn-about-what-anybody-thinks attitude.

Grand Funk Railroad is known throughout the world as being the loudest, hardest rocking, lowest grade of musicians on earth - the group who spends 99% of lts time reading and hearing how ugly they are. They are liked only by their Brothers, the common people. They are despised by everyone else, especially their superiors, Ironically, Grand Funk Railroad is also known for their superior brand of happiness and their don't-give-a-damn-about-what-anybody thinks attitude.

On Tuesday night July 22nd at 8:00 p.m. two outcast Brothers met for the first time in the middle of a grass airstrip called "Schweinfurt".

For the next three hours there was no war, no Army, no mud, and no critics. There was one universal language spoken - Music.

Mark, Don, and Mel asked me to contact the Army last January when we would be in Europe for concerts, and asked permission to give a free concert for the U. S. Armed Forces in Germany. I did and there was no reply.

Month after month went by, and letter after letter went off to the Army. Finally only a few weeks ago, I contacted Sen Hubert Humphry. We had met Sen. Humphry when he was the Vice President on a show given a year or two ago. I explained the situation, that the Army had ignored our repeated requests, and he immediately went to work for us.

Ironically he too was ignored. Then the riot in Munich started it all.

Grand Funk Railroad was scheduled for their European tour of Hamburg, Dusseldorf, Frankfurt, Munich, Nuremberg, Rotterdam Paris, Milan, Rome and London for the month of June. However all the shows sold out so quickly in advance that in one city Munich, there was a riot between fans and the police which left 27 people hospitalized after fighting for tickets. Grand Funk was cancelled by the Munich police and another riot occured.

That was when the U. S. Army in Munich contacted me at my office in New York and, needless to say, a hasty concert was arranged. At the time I was on the telephone with the Army, Grand Funk plus five tons of equipment and eight technicians were peacefully sleeping in a BOAC 707 enroute from Detroit to London, 38,000 feet above the Atlantic. There were then only 72 hours to arrange the concert.

I flew to London the next morning where I met with Army technicians, signal-corpmen, two Majors, one Colonel and a Four-star General. We agreed on Schweinfurt as the obvious base since it was only 150 kilometers from Frankfurt where the boys were giving a concert the night before.

The stage would be built by the Infantry from flat-bed ammo trucks. The electrical outlets (which had to be run over 500 yards to the airstrip) would be laid by the signal corps. Lights were to courtesy of six fulltrack armed tanks with 1,000,000 candlepower sniper spotlights. The dressing room was an officers combat tent.

Moral support came from 10,000 tired, dirty GI's who poured onto the site from every U. S. Army base in Germany. Even the weather cooperated by giving us the only day without rain in nearly three weeks. Although it was cold - 39 degrees - the ovation which went up when Grand Funk took the stage made it the warmest spot in the Western Hemisphere.

In the airplane on the way to Holland, I saw Mel looking at the certificate presented to each of us after the show by the commander of the U.S. Armed Forces in Europe. It read:

"This Scroll of Appreciation is awarded to Grand Funk Railroad for outstanding showmanship and high caliber of entertainment while performing for the United States Army, Europe, and the Seventh Army personnel." It was the 22nd day of June, 1971. There was no thought of war in Germany on that day.