Rock Music: A Culture Or A Ripoff? 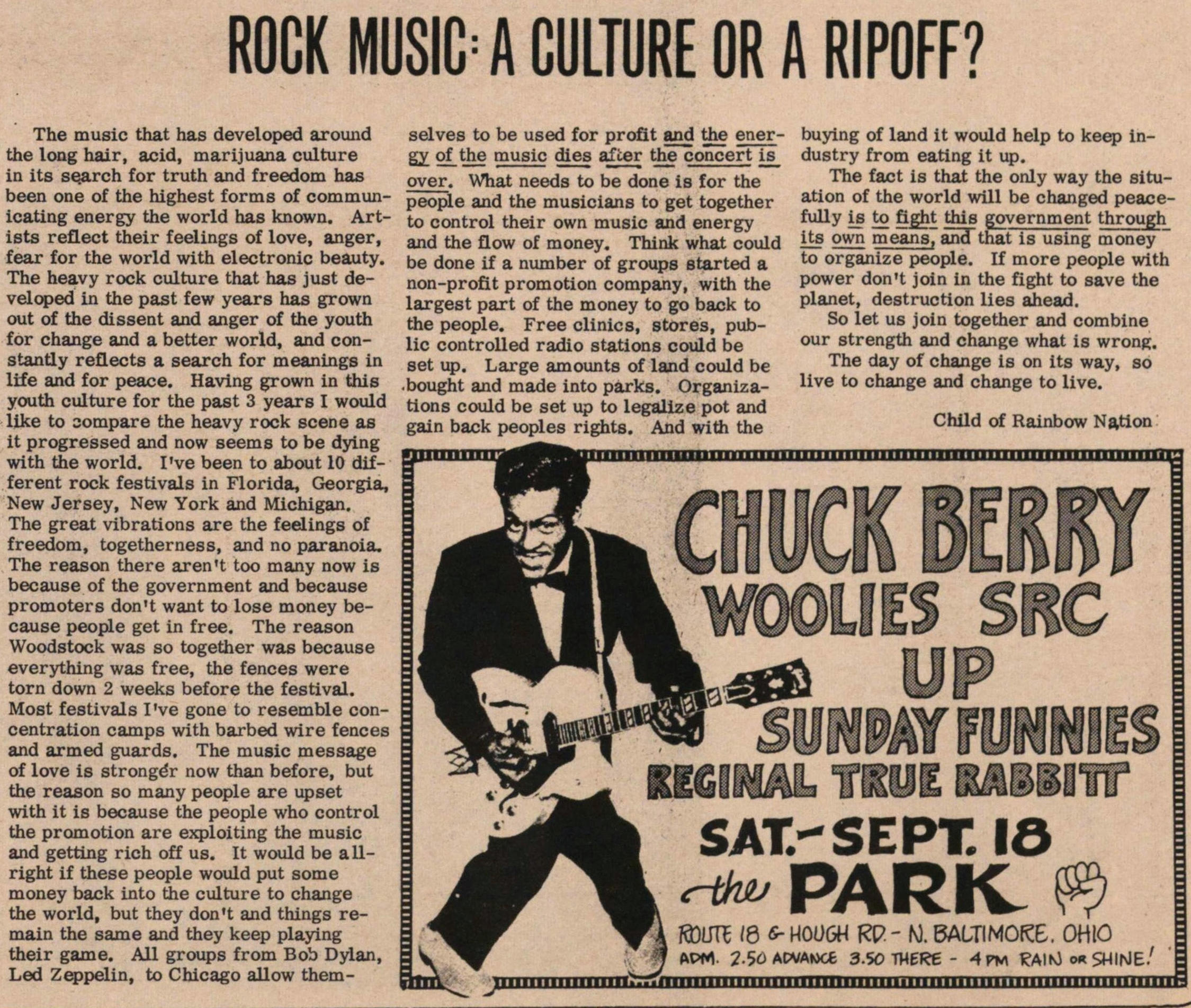 ROCK MUSIC: A CULTURE OR A RIPOFF?

The music that has developed around the long hair, acid, marijuana culture in its search for truth and freedom has been one of the highest forms of communicating energy the world has known. Artists refiect their feelings of love, anger, fear for the world with electronic beauty. The heavy rock culture that has just developed in the past few years has grown out of the dissent and anger of the youth for change and a better world, and constantly reflects a search for meanings in life and for peace. Having grown in this youth culture for the past 3 years I would like to compare the heavy rock scene as it progressed and now seems to be dying with the world. I've been to about 10 different rock festivals in Florida, Georgia, New Jersey, New York and Michigan. The great vibrations are the feelings of freedom, togetherness, and no paranoia. The reason there aren 't too many now is because of the government and because promoters don't want to lose money because people get in free. The reason Woodstock was so together was because everything was free, the fences were torn down 2 weeks before the festival. Most festivals I've gone to resemble concentration camps with barbed wire fences and armed guards. The music message of love is stronger now than before, but the reason so many people are upset with it is because the people who control the promotion are exploiting the music and getting rich off us. It would be allright if these people would put some money back into the culture to change the world, but they don't and things remain the same and they keep playing their game. All groups from Bob Dylan, Led Zeppelin, to Chicago allow selves to be used for profit and the energy of the music dies after the concert is over. What needs to be done is for the people and the musicians to get together to control their own music and energy and the flow of money. Think what could be done if a number of groups started a non-profit promotion company, with the largest part of the money to go back to the people. Free clinics, stores, public controlled radio stations could be set up. Large amounts of land could be bought and made into parks. Organizations could be set up to legalize pot and gain back peoples rights. And with the buying of land it would help to keep industry from eating it up.

The fact is that the only way the situation of the world will be changed peacefully is to fight this government through its own means, and that is using money to organize people. If more people with power don't join in the fight to save the planet, destruction lies ahead.

So let us join together and combine our strength and change what is wrong.

The day of change is on its way, so live to change and change to live.