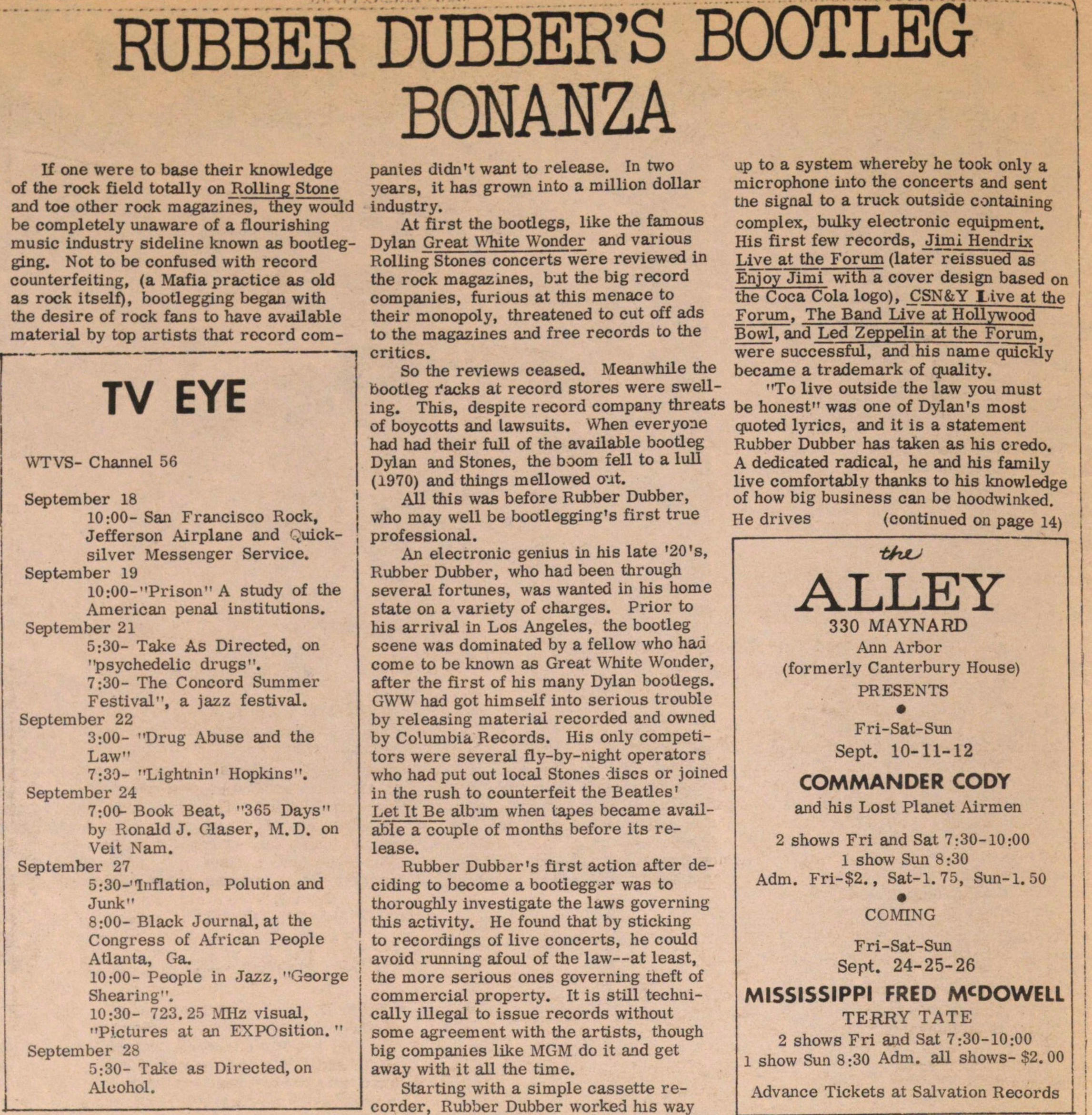 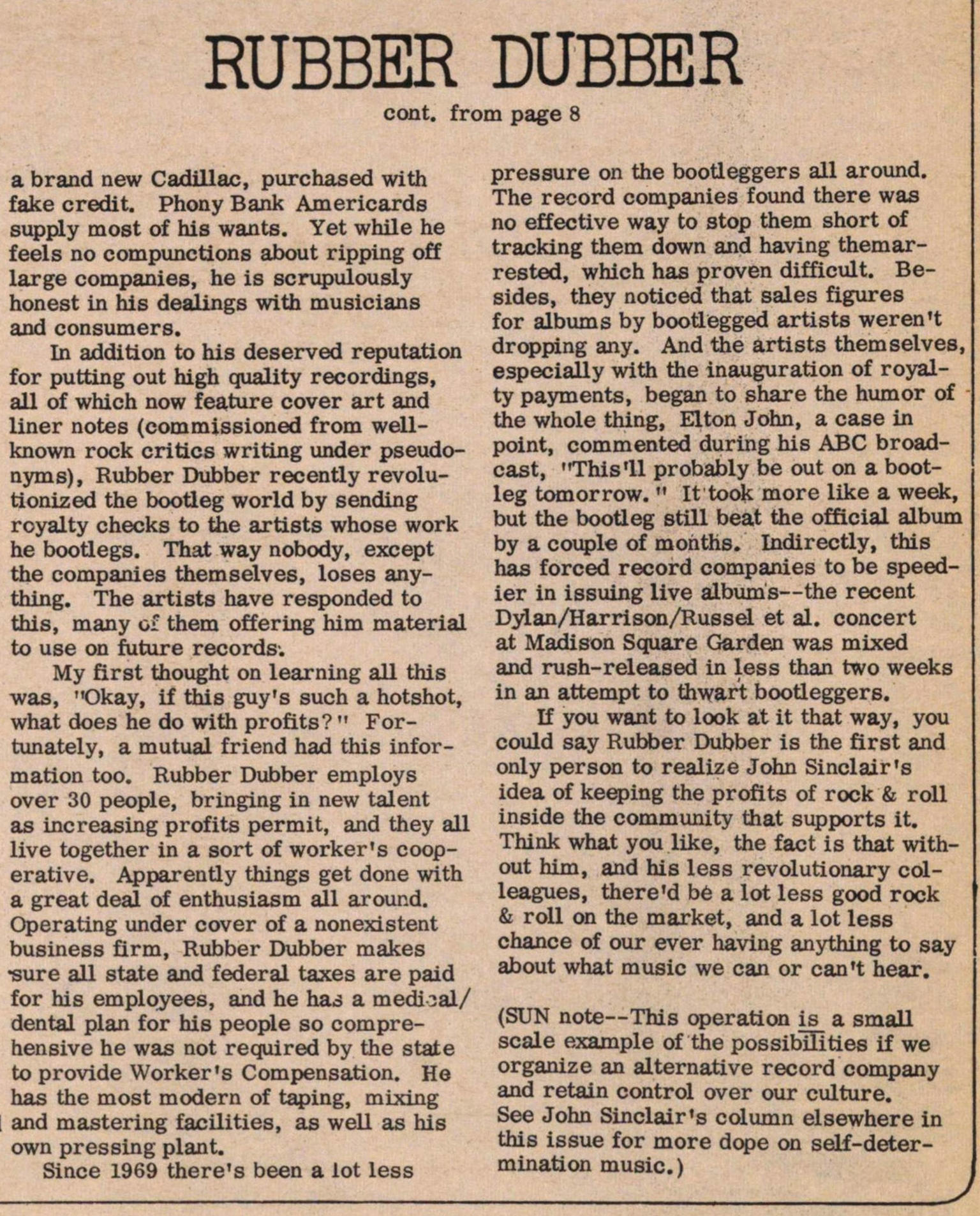 If one were to base their knowledge of the rock field totally on Rolling Stone and toe other rock magazines, they would be completely unaware of a flourishing music industry sideline known as bootlegging. Not to be confused with record counterfeiting, (a Mafia practice as old as rock itself), bootlegging began with the desire of rock fans to have available material by top artists that record panies didn't want to release. In two years, it has grown into a million dollar industry. At first the bootlegs, like the famous Dylan Great White Wonder and various RollingStones concerts were reviewed in the rock magazines, but the big record companies, furious at this menace to their monopoly, threatened to cut off ads to the magazines and free records to the critics.

So the reviews ceased. Meanwhile the bootleg racks at record stores were swelling. This, despite record company threats of boycotts and lawsuits. When everyone had had their full of the available bootleg Dylan and Stones, the boom feil to a lull (1970) and things mellowed out.

All this was before Rubber Dubber, who may well be bootlegging's first true professional.

An eleccronic genius in his late 20's, Rubber Dubber, who had been through several fortunes, was wanted in his home state on a variety of charges. Prior to his arrival in Los Angeles, the bootleg scene was dominated by a fellow who had come to be known as Great White Wonder, after the first of his many Dylan bootlegs. GWW had got himself into serious trouble by releasing material recorded and owned by Columbia Records. His only competitors were several fly-by-night operators who had put out local Stones discs or joined in the rush to counterfeit the Beatles' Let It Be album when tapes became available a couple of months before its release.

Rubber Dubber 's first action after deciding to become a bootlegger was to thoroughly investigate the laws governing this activity. He found that by sticking to recordings of live concerts, he could avoid running afoul of the law - at least, the more serious ones governing theft of commercial property. It is still technically illegal to issue records without some agreement with the artists, though big companies like MGM do it and get away with it all the time.

Starting with a simple cassette recorder, Rubber Dubber worked his way up to a system whereby he took only a microphone into the concerts and sent to a signal to a truck outside containing complex, bulky electronic equipment. His first few records, Jimi Hendrix Live at the Forum (later reissued as Enjoy Jimi with a cover design based on the Coca Cola logo), CSN&Y live at the Forum, The Band Live at Hollywood Bowl, and Led Zeppelin at the Forum, were successful, and his name quickly became a trademark of quality.

"To live outside the law you must be honest" was one of Dylan's most quoted lyrics, and it is a statement Rubber Dubber has taken as his credo. A dedicated radical, he and his family live comfortably thanks to his knowledge of how big business can be hoodwinked. He drives a brand new Cadillac, purchased with fake credit. Phony Bank Americards supply most of his wants. Yet while he feels no compunctions about ripping off large companies, he is scrupulously honest in bis dealings with musicians and consumers.

In addition to his deserved reputation for putting out high quality recordings, all of which now feature cover art and liner notes (commissioned from well-known rock critics writing under pseudonyms), Rubber Dubber recently revolutionized the bootleg world by sending royalty checks to the artists whose work he bootlegs. That way nobody, except the companies themselves, loses anything. The artists have responded to this, many of them offering him material to use on future records.

My first thought on learning all this was, "Okay, if this guy's such a hotshot, what does he do with profits?" Fortunately, a mutual friend had this information too. Rubber Dubber employs over 30 people, bringing in new talent as increasing profits permit, and they all live together in a sort of worker's cooperative. Apparently things get done with a great deal of enthusiasm all around. Operating under cover of a nonexistent business firm, Rubber Dubber makes sure all state and federal taxes are paid for his employees, and he has a mediaal dental plan for his people so comprehensive he was not required by the state to provide Worker's Compensation. He has the most modern of taping, mixing and mastering facilities, as well as his own pressing plant.

Since 1969 there's been a lot less pressure on the bootleggers all around. The record companies found there was no effective way to stop them short of tracking them down and having them arrested, which has proven difficult. Besides, they noticed that sales figures for albums by bootlegged artists weren't dropping any. And the artists themselves, especially with the inauguration of royalty payments, began to share the humor of the whole thing. Elton John, a case in point, commented during his ABC broadcast, "This'll probably be out on a bootleg tomorrow." It took more like a week, but the bootleg still beat the official album by a couple of months. Indirectly, this has forced record companies to be speedier in issuing live albums - the recent Dylan/Harrison/Russel et al. concert at Madison Square Garden was mixed and rush-released in less than two weeks in an attempt to thwart bootleggers.

If you want to look at it that way, you could say Rubber Dubber is the first and only person to realize John Sinclair 's idea of keeping the profits of rock & roll inside the community that supports it. Think what you like, the fact is that without him, and his less revolutionary colleagues, there'd be a lot less good rock & roll on the market, and a lot less chance of our ever having anything to say about what music we can or can't hear.

(SUN note- This operation is a small scale example of the possibilities if we organize an alternative record company and retain control over our culture. See John Sinclair's column elsewhere in this issue for more dope on self-determination music.)