From The Basement Of The Tri-level Chamber Of Horrors 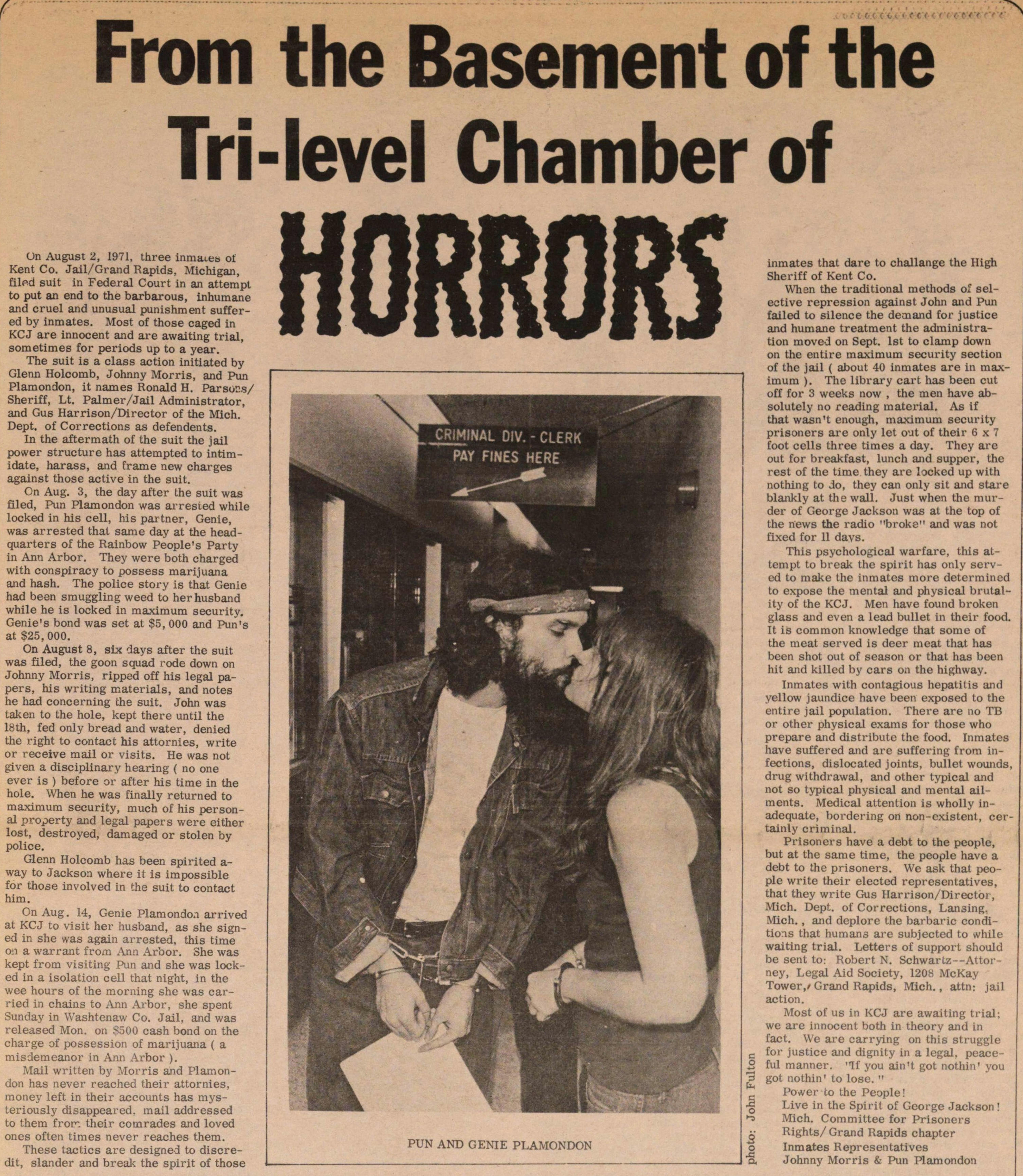 On August 2, 1971, three inmates of Kent Co. Jail Grand Rapids, Michigan, filed suit in Federal Court in an attempt to put an end to the barbarous, inhumane and cruel and unusual punishment suffered by inmates. Most of those caged in KCJ are innocent and are awaiting trial, sometimes for periods up to a year.

The suit is a class action initiated by Glenn Holcomb, Johnny Morris, and Pun Plamondon, it names Ronald H. Parsons/Sheriff, Lt. Palmer/Jail Administrator, and Gus Harrison/Director of the Mich. Dept. of Corrections as defendents.

In the aftermath of the suit the jail power structure has attempted to intimidate, harass, and frame new charges against those active in the suit.

On Aug. 3, the day after the suit was filed, Pun Plamondon was arrested while locked in his cell, his partner, Genie, was arrested that same day at the headquarters of the Rainbow People's Party in Ann Arbor. They were both charged with conspiracy to possess marijuana and hash. The police story is that Genie had been smuggling weed to her husband while he is locked in maximum security. Genie's bond was set at $5,000 and Pun's at $25,000.

On August 8, six days after the suit was filed, the goon squad rode down on Johnny Morris, ripped off his legal papers, his writing materials, and notes he had concerning the suit. John was taken to the hole, kept there until the 18th, fed only bread and water, denied the right to contact his attornies, write or receive mail or visits. He was not given a disciplinary hearing (no one ever is) before or after his time in the hole. When he was finally returned to maximum security, much of his personal property and legal papers were either lost, destroyed, damaged or stolen by police.

Glenn Holcomb has been spirited away to Jackson where it is impossible for those involved in the suit to contact him. On Aug. 14, Genie Plamondon arrived at KCJ to visit her husband, as she signed in she was again arrested, this time on a warrant from Ann Arbor. She was kept from visiting Pun and she was locked in a isolation cell that night, in the wee hours of the morning she was carried in chains to Ann Arbor, she spent Sunday in Washtenaw Co. Jail, and was released Mon. on $500 cash bond on the charge of possession of marijuana (a misdemeanor in Ann Arbor).

Mail written by Morris and Plamondon has never reached their attornies, money left in their accounts has mysteriously disappeared. mail addressed to them from their comrades and loved ones often times never reaches them.

These tactics are designed to discredit, slander and break the spirit of those inmates that dare to challange the High Sheriff of Kent Co.

When the traditional methods of selective repression against John and Pun failed to silence the demand for justice and humane treatment the administration moved on Sept. 1st to clamp down on the entire maximum security section of the jail (about 40 inmates are in maximum). The library cart has been cut off for 3 weeks now, the men have absolutely no reading material. As if that wasn't enough, maximum security prisoners are only let out of their 6x7 foot cells three times a day. They are out for breakfast, lunch and supper, the rest of the time they are locked up with nothing to Jo, they can only sit and stare blankly at the wall. Just when the murder of George Jackson was at the top of the news the radio "broke" and was not fixed for 11 days.

This psychological warfare, this attempt to break the spirit has only served to make the inmates more determined to expose the mental and physical brutality of the KCJ. Men have found broken glass and even a lead bullet in their food. It is common knowledge that some of the meat served is deer meat that has been shot out of season or that has been hit and killed by cars on the highway.

Inmates with contagious hepatitis and yellow jaundice have been exposed to the entire jail population. There are no TB or other physical exams for those who prepare and distribute the food. Inmates have suffered and are suffering from infections, dislocated joints, bullet wounds, drug withdrawal, and other typical and not so typical physical and mental ailments. Medical attention is wholly inadequate, bordering on non-existent, certainly criminal.

Prisoners have a debt to the people, but at the same time, the people have a debt to the prisoners. We ask that people write their elected representatives, that they write Gus Harrison/Director, Mich. Dept. of Corrections, Lansing. Mich., and deplore the barbaric conditions that humans are subjected to while waiting trial. Letters of support should be sent to: Robert N. Schwarlz--Attorney, Legal Aid Society, 1208 McKay Tower, Grand Rapids, Mich., attn: jail action.

Most of us in KCJ are awaiting trial; we are innocent both in theory and in fact. We are carrying on this struggle for justice and dignity in a legal, peaceful manner. "if you ain't got nothin' you got nothin' to lose.