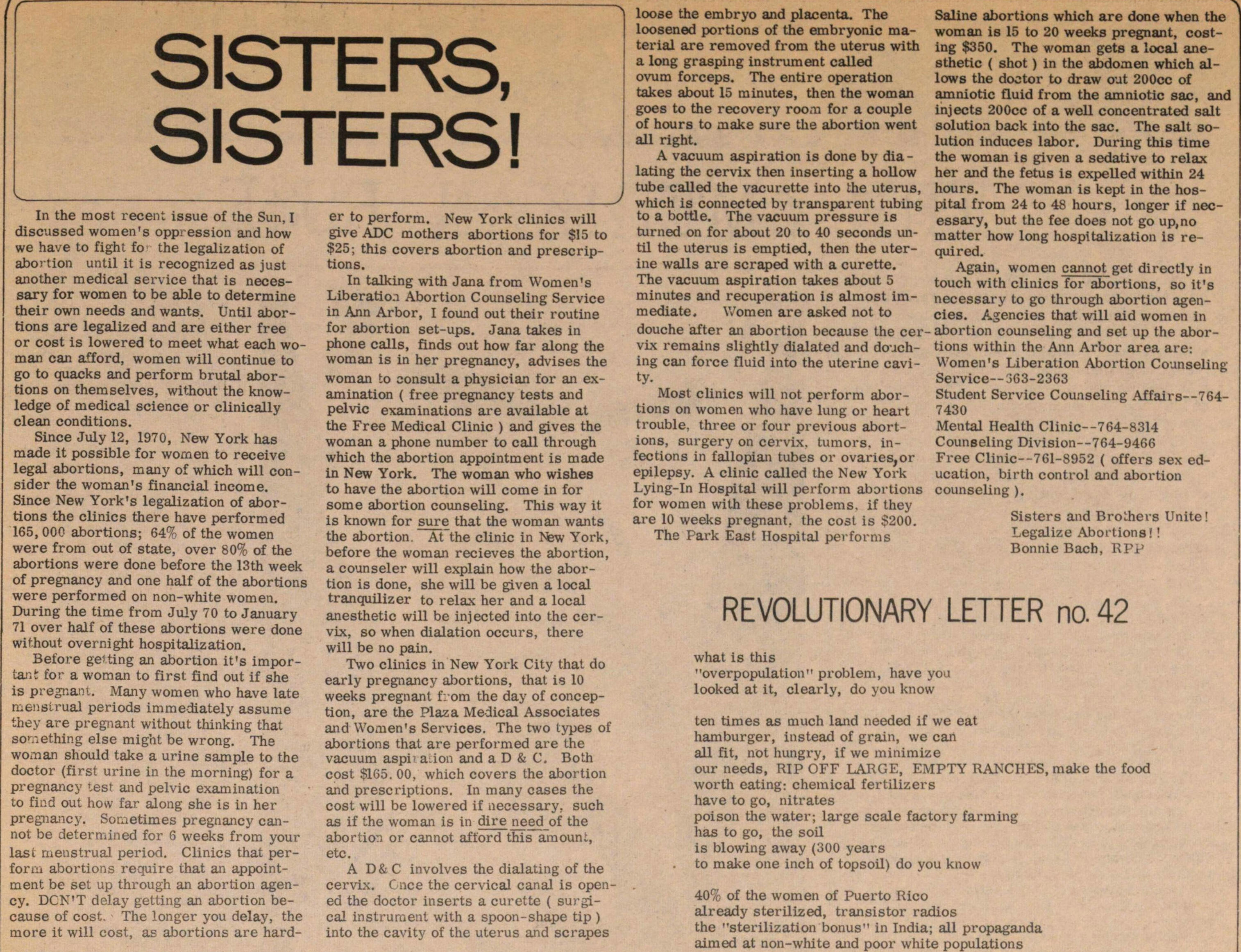 In the most recent issue of the Sun, I discussed women's oppression and how we have to fight fo' the legalization of abortion until it is recognized as just another medical service that is necessary for women to be able to determine their own needs and wants. Until abortions are legalized and are either free or cost is lowered to meet what each woman can afford, women will continue to go to quacks and perform brutal abortions on themselves, without the knowledge of medical science or clinically clean conditions.

Before getting an abortion it's important for a woman to first find out if she is pregnant, Many women who have late menstrual periods immediately assume they are pregnant without thinking that something else might be wrong. The woman should take a urine sample to the doctor (first urine in the morning) for a pregnancy test and pelvic examination to find out how far along she is in her pregnancy. Sometimes pregnancy cannot be determined for 6 weeks from your last menstrual period. Clinics that perform abortions require that an appointment be set up through an abortion agency. DON'T delay getting an abortion because of cost. The longer you delay, the more it will cost, as abortions are harder to perform. New York clinics will give ADC mothers abortions for $15 to $25; this covers abortion and prescriptions.

In talking with Jana from Women's Liberation Abortion Counseling Service in Ann Arbor, I found out their routine for abortion set-ups. Jana takes in phone calls, finds out how far along the woman is in her pregnancy, advises the woman to consult a physician tor an examination (free pregnancy tests and pelvic examinations are available at the Free Medical Clinic) and gives the woman a phone number to call through which the abortion appointment is made in New York. The woman who wishes to have the abortion will come in for some abortion counseling. This way it is known for sure that the woman wants the abortion. At the clinic in New York, before the woman recieves the abortion, a counseler will explain how the abortion is done, she will be given a local tranquilizer to relax her and a local anesthetic will be injected into the cervix, so when dialation occurs, there will be no pain.

Two clinics in New York City that do early pregnancy abortions, that is 10 weeks pregnant from the day of conception, are the Plaza Medical Associates and Women's Services. The two types of abortions that are performed are the vacuum aspiration and a D & C. Both cost $165.00, which covers the abortion and prescriptions. In many cases the cost will be lowered if necessary. such as if the woman is in dire need of the abortion or cannot afford this amount, etc.

A D& C involves the dialating of the cervix. Once the cervical canal is opened the doctor inserts a curette (surgical instrument with a spoon-shape tip) into the cavity of the uterus and scrapes loose the embryo and placenta. The loosened portions of the embryonic material are removed from the uterus with a long grasping instrument called ovum forceps. The entire operation takes about 15 minutes, then the woman goes to the recovery room for a couple of hours to make sure the abortion went all right.

A vacuum aspiration is done by dialating the cervix then inserting a hollow tube called the vacurette into the uterus, which is connected by transparent tubing to a bottle. The vacuum pressure is turned on for about 20 to 40 seconds until the uterus is emptied, then the uterine walls are scraped with a curette. The vacuum aspiration takes about 5 minutes and recuperation is almost immediate. Women are asked not to douche after an abortion because the cervix remains slightly dialated and douching can force fluid into the uterine cavity.

Most clinics will not perform abortions on women who have lung or heart trouble, three or four previous abortions, surgery on cervix. tumors, infections in fallopian tubes or ovaries, or epilepsy. A clinic called the New York Lying-In Hospital will perform abortions for women with these problems. if they are 10 weeks pregnant, the cost is $200.

The Park East Hospital performs Saline abortions which are done when the woman is 15 to 20 weeks pregnant, costing $350. The woman gets a local anesthetic (shot) in the abdomen which allows the doctor to draw out 200cc of amniotic fluid from the amniotic sac, and injects 200cc of a well concentrated salt solution back into the sac. The salt solution induces labor. During this time the woman is given a sedative to relax her and the fetus is expelled within 24 hours. The woman is kept in the hospital from 24 to 48 hours, longer if necessary, but the fee does not go up, no matter how long hospitalization is required.