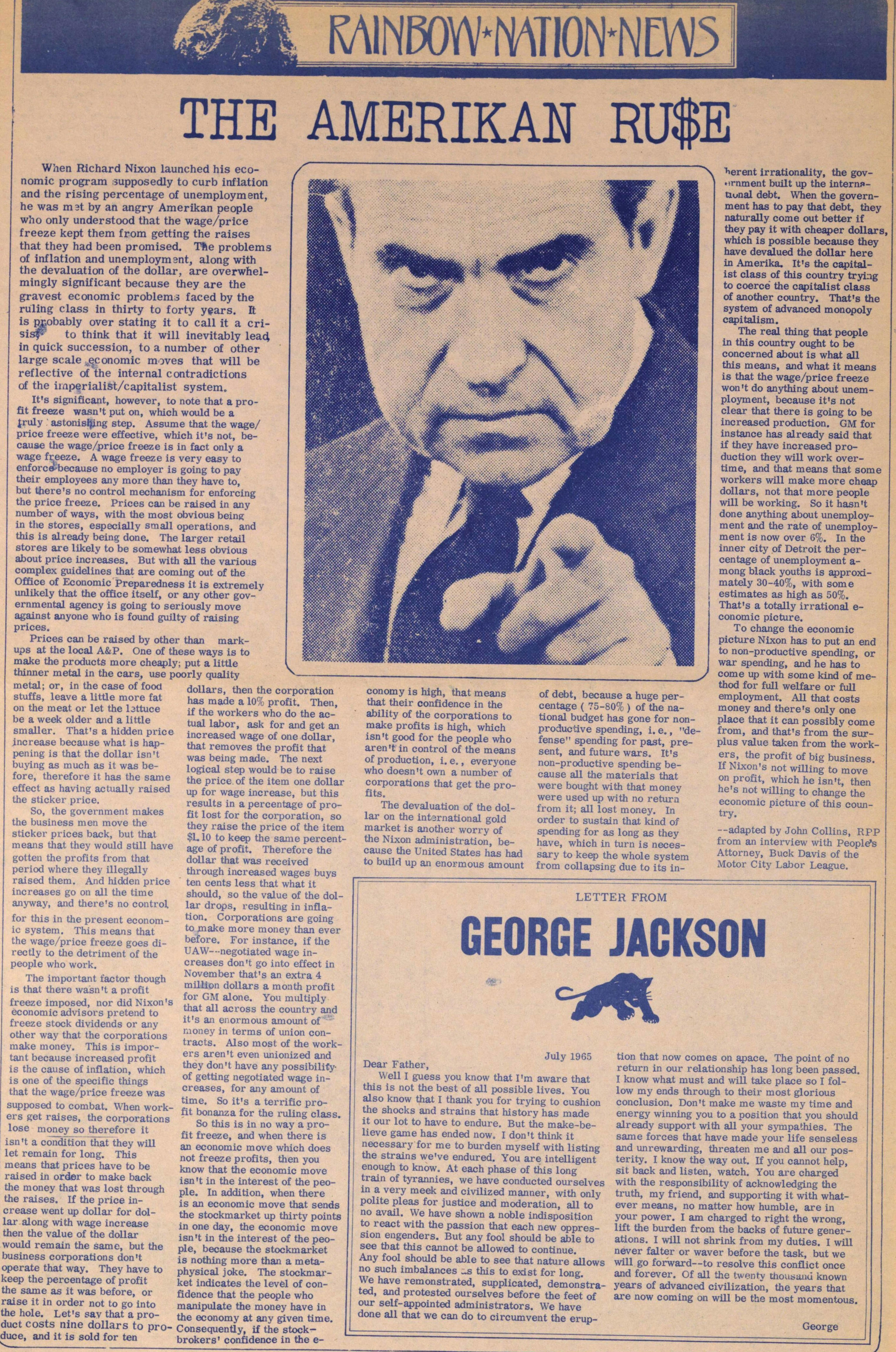 When Richard Nixon launched his economic program supposedly to curb inflation and the rising percentage of unemployment, he was met by an angry Amerikan people who only understood that the wage/price freeze kept them from getting the raises that they had been promised. The problems of inflation and unemployment, along with the devaluation of the dollar, are overwhelmingly significant because they are the gravest economic problems faced by the ruling class in thirty to forty years. ft is probably over stating it to cali it a crisis, to think that it will inevitably lead in quick succession, to a number of other large scale economic moves that will be reflective of the internal contradictions of the imperialist/capitalist system.

It's significant, however, to note that a profit freeze wasn't put on, which would be a truly astonishing step. Assume that the wage price freeze were effective, which it's not, because the wage/price freeze is in fact only a wage freeze. A wage freeze is very easy to enforce because no employer is going to pay their employees any more than they have to, but there's no control mechanism for enforcing the price freeze. Prices can be raised in any number of ways, with the most obvious being in the stores, especially small operations, and this is already being done. The larger retail stores are likely to be somewhat less obvious about price increases. But with all the various complex guidelines that are coming out of the Office of Economic Preparedness it is extremely unlikely that the office itself, or any other governmental agency is going to seriously move against anyone who is found guilty of raising prices.

Prices can be raised by other than markups at the local A&P. One of these ways is to make the products more cheaply; put a little thinner metal in the cars, use poorly quality metal; or, in the case of food stuffs, leave a little more fat on the meat or let the lettuce be a week older and a little smaller. That's a hidden price increase because what is happening is that the dollar isn't buying as much as it was before, therefore it has the same effect as having actually raised the sticker price.

So, the government makes the business men move the sticker prices back, but that means that they would still have gotten the profits from that period where they illegally raised them. And hidden price increases go on all the time anyway, and there's no control for this in the present economic system. This means that the wage/price freeze goes directly to the detriment of the people who work. The important factor though is that there wasn't a profit freeze imposed, nor did Nixon's economic advisors pretend to freeze stock dividends or any other way that the corporations make money.

This is important because increased profit is the cause of inflation, which is one of the specific things that the wage/price freeze was supposed to combat. When workers get raises, the corporations lose money so therefore it isn't a condition that they will let remain for long. This means that prices have to be raised in order to make back the money that was lost through the raises. If the price increase went up dollar for dollar along with wage increase then the value of the dollar would remain the same, but the business corporations don't operate that way. They have to keep the percentage of profit the same as it was before, or raise it in order not to go into the hole. Let's say that a product costs nine dollars to produce, and it is sold for ten dollars, then the Corporation has made a 10% profit. Then, if the workers who do the actual labor, ask for and get an increased wage of one dollar, that removes the profit that was being made. The next logical step would be to raise the price of the item one dollar up for wage increase, but this results in a percentage of profit lost for the Corporation, so they raise the price of the item $1.10 to keep the same percentage of profit. Therefore the dollar that was received through increased wages buys ten cents less that what it should, so the value of the dollar drops, resulting in inflation. Corporations are going to make more money than ever before. For instance, if the UAW- negotiated wage increases don't go into effect in November that's an extra 4 million dollars a month profit for GM alone. You multiply that all across the country and it's an enormous amount of money in terms of union contracts. Also most of the workers aren't even unionized and they don 't have any possibility of getting negotiated wage increases, for any amount of time. So it's a terrific fit bonanza for the ruling class.

The devaluation of the dollar on the international gold market is another worry of the Nixon administration, because the United States has had to build up an enormous amount of debt, because a huge percentage (75-80%) of the national budget has gone for nonproductive spending, i.e., "defense" spending for past, present, and future wars. It's non-productive spending because all the materials that were bought with that money were used up with no return from it; all lost money. In order to sustain that kind of spending for as long as they have, which in turn is necessary to keep the whole system from collapsing due to its inherent irrationality, the government built up the international debt. When the government has to pay that debt, they naturally come out better if they pay it with cheaper dollars, which is possible because they have devalued the dollar here in Amerika. It's the capitalist class of this country trying to coerce the capitalist class of another country. That's the system of advanced monopoly capitalism.

The real thing that people in this country ought to be concerned about is what all this means, and what it means is that the wage/price freeze won't do anything about unemployment, because it's not clear that there is going to be increased production. GM for instance has already said that if they have increased production they will work overtime, and that means that some workers will make more cheap dollars, not that more people will be working. So it hasn't done anything about unemployment and the rate of unemployment is now over 6%. In the inner city of Detroit the percentage of unemployment among black youths is approximately 30-40%, with some estimates as high as 5070. That's a totally irrational economic picture.

To change the economic picture Nixon has to put an end to non-productive spending, or war spending, and he has to come up with some kind of method for full welfare or full employment. All that costs money and there 's only one place that it can possibly come from, and that's from the surplus value taken from the workers, the profit of big business If Nixon's not willing to move on profit, which he isn't, then he's not willing to change the economic picture of this country.

-- adapted by John Collins, RPP from an interview with People's Attorney, Buck Davis of the Motor City Labor League.