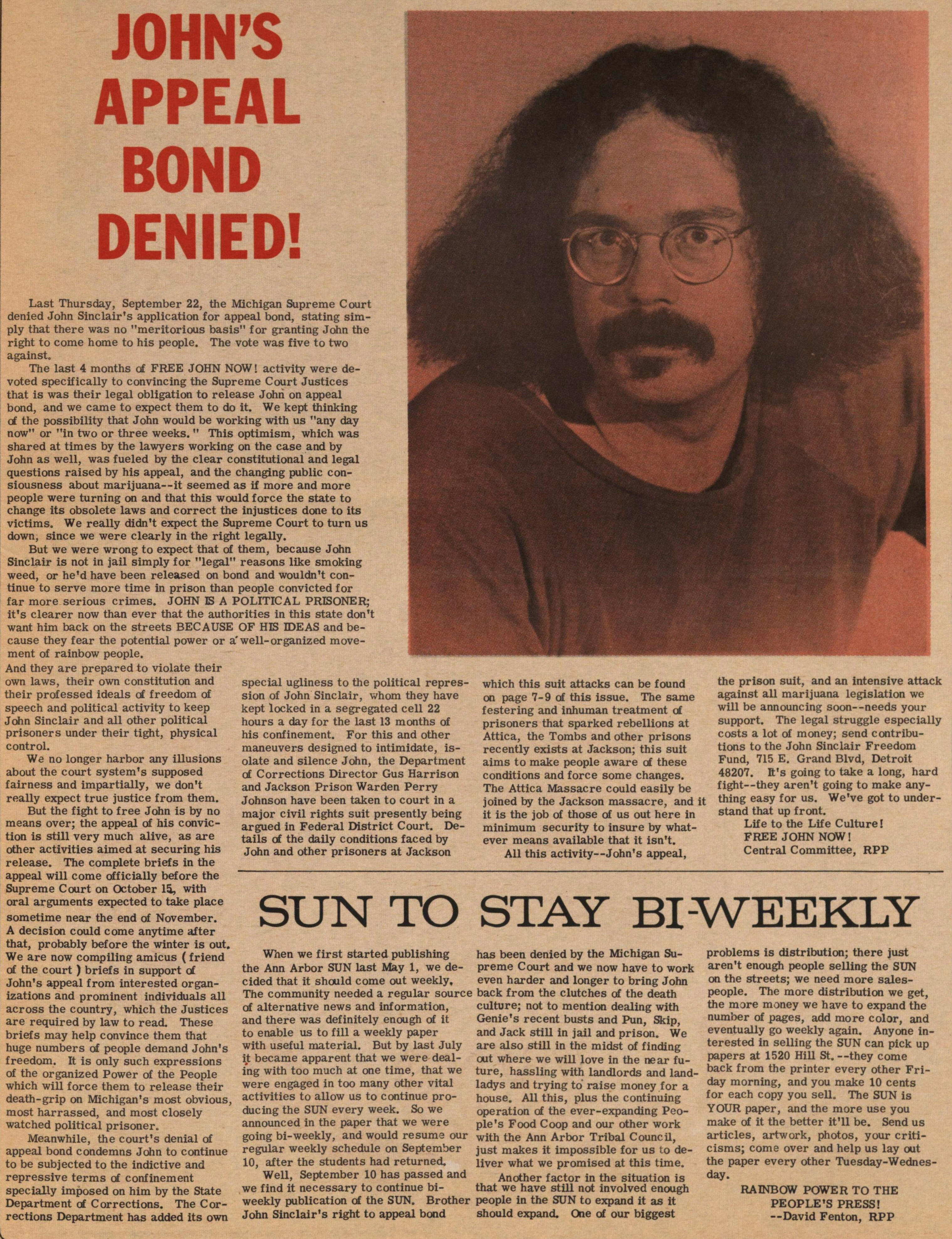 Last Thursday, September 22, the Michigan Supreme Court denied John Sinclair's application for appeal bond, stating simply that there was no "meritorious basis" for granting John the right to come home to his people. The vote was five to two against. The last 4 months of FREE JOHN NOW ! activity were devoted specifically to convincing the Supreme Court Justices that is was their legal obligation to release John on appeal bond, and we came to expect them to do it. We kept thinking of the possibility that John would be working with us "any day now" or "in two or three weeks. " This optimism, which was shared at times by the lawyers working on the case and by John as well, was fueled by the clear constitutional and legal questions raised by his appeal, and the changing public consiousness about marijuana - it seemed as if more and more people were turning on and that this would f orce the state to change its obsolete laws and correct the injustices done to its victims. We really didn't expect the Supreme Court to turn us down, since we were clearly in the right legally. But we were wrong to expect that of them, because John Sinclair is not in jail simply for "legal" reasons like smoking weed, or he'd have been released on bond and wouldn't continue to serve more time in prison than people convicted for far more serious crimes. JOHN E A POLITICAL PRBONER; it's clearer now than ever that the authorities in this state don't want him back on the streets BECAUSE OF HIS IDEAS and because they fear the potential power or a'well-organized movement of rainbow people. And they are prepared to viólate their own laws, their own constitution and their professed ideáis of freedom of speech and political activity to keep John Sinclair and all other political prisoners under their tight, physical control. We no longer harbor any illusions about the court system's supposed fairness and impartially, we don't really expect true justice from them. But the fight to free John is by no means over; the appeal of his conviction is still very much alive, as are other activities aimed at securing his release. The complete brief s in the appeal will come officially before the Supreme Court on October lü, with oral arguments expected to take place sometime near the end of November. A decisión could come anytime after that, probably before the winter is out. We are now compiling amicus ( f riend cf the court ) briefs in support of John's appeal from interested organizations and prominent individuals all across the country, which the Justices are required by law to read. These briefs may help convince them that huge numbers of people demand John's freedom. It is only such expressions of the organized Power of the People which will force them to release their death-grip on Michigan's most obvious, most harrassed, and most closely watched political prisoner. Meanwhile, the court 's denial of appeal bond condemns John to continue to be subjected to the indictive and repressive terms of confinement specially imposed on him by the State Department of Corrections. The Corrections Department has added its own special ugliness to the political repression of John Sinclair, whom they have kept locked in a segregated cell 22 hours a day for the last 13 months of his confinement. For this and other maneuvers designed to intimídate, isolate and silence John, the Department of Corrections Director Gus Harrison and Jackson Prison Warden Perry Johnson have been taken to court in a major civil rights suit presently being argued in Federal District Court. Details of the daüy conditions faced by John and other prisoners at Jackson which this suit attacks can be found on page 7-9 of this issue. The same festering and inhuman treatment oí prisoners that sparked rebellions at Attica, the Tombs and other prisons recently exists at Jackson; this suit aims to make people aware of these conditions and force some changes. The Attica Massacre could easily be joined by the Jackson massacre, and it it is the job oí those of us out here in minimum security to insure by whatever means available that it isn't. All this activity - John's appeal, the prison suit, and an intensive attack against all marijuana legislation we will be announcing soon--needs your support. The legal struggle especially costs a lot of money; send contributions to the John Sinclair Freedom Fund, 715 E. Grand Blvd, Detroit 48207. tt's going to take a long, hard fight - they aren't going to make anything easy for us. We've got to understand that up front. Life to the Life Culture! FREE JOHN NÖW ! Central Committee, RPP