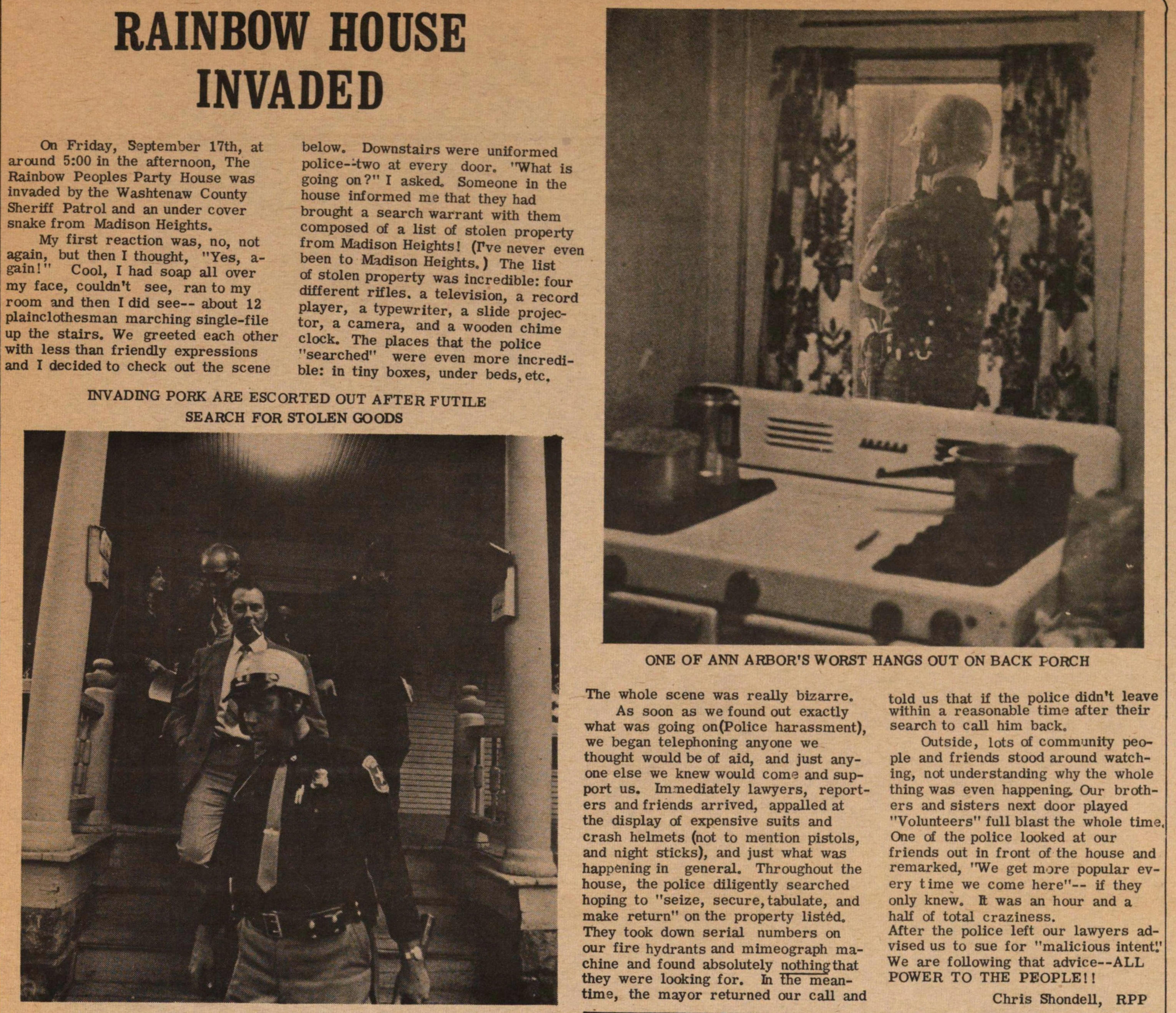 Oí Friday, September 17th, at around 5:00 in the afternoon, The Rainbow Peoples Party House was invaded by the Washtenaw County Sheriff Patrol and an under cover snake from Madison Heights. My first reaction was, no, not again, but then I thought, "Yes, again!" Cool, I had soap all over my face, couldn't see, ran to my room and then I did see- about 12 plainclothesman marching single-file up the stairs. We greeted each other with less than friendly expressions and I decided to check out the scène below. Downstairs were uniformed police--two at every door. "What is going on?" I asked. Someone in the house informed me that they had brought a search warrant with them composed of a list of stolen property f rom Madison Heights! (rve never even been to Madison Heights. ) The list of stolen property was four different rifles, a televisión, a record player, a typewriter, a sude projector, a camera, and a wooden chime clock. The places that the pólice "searched" were even more incredible: in tiny boxes, under beds.etc The whole scène was really bizarre. As soon as we found out exactly what was going on(Police harassment), we began telephoning anyone we thought would be of aid, and just anyone else we knew would come and support us. Inmediately lawyers, reporters and friends arrived, appalled at the display of expensive suits and crash helmets (not to mention pistols, and night sticks), and just what was happening in general. Throughout the house, the pólice diligently searched hoping to "seize, secure, tabulate, and make return" on the property listéd. They took down serial numbers on our fire hydrants and mimeograph machine and found absolutely nothingthat they were looking for. Li the meantime, the mayor returned our cali and told us that ií the pólice didn't leave within a reasonable time after their search to cali him back. Outside, lots of comnvinity people and friends stood around watching, not understanding why the whole thing was even happening Our brothers and sisters next door played "Volunteers" f uil blast the whole time, One of the pólice looked at our friends out in front of the house and remarked, "We get more popular every time we come if they only knew. It was an hour and a half of total craziness. After the pólice left our lawyers advised us to sue for "malicious intenti' We are following that advice - ALL POWER TO THE PEOPLEÜ