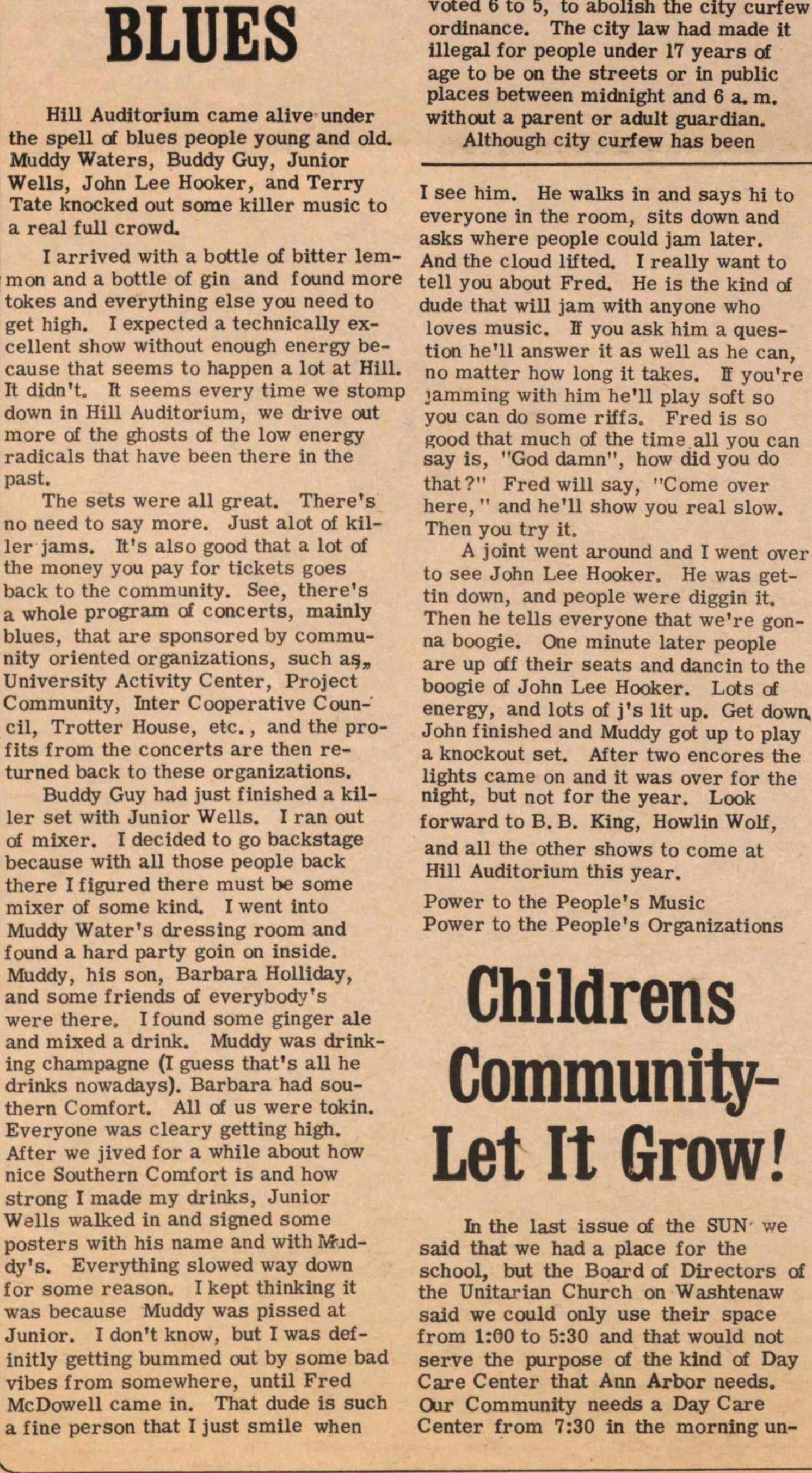 Hill Auditorium carne alive under the spell erf blues people young and old. Muddy Waters, Buddy Guy, Junior Wells, John Lee Hooker, and Terry Tate knocked out sorae killer music to a real full crowd. I arrived with a bottle of bitter lemmon and a bottle of gin and found more tokes and everything else you need to get high. I expected a technically excellent show without enough energy because that seems to happen a lot at Hill. It didn't. It seems every time we stomp down in Hill Auditorium, we drive out more of the ghosts of the low energy radicáis that have been there in the past. The sets were all great. There's no need to say more. Just alot of killer jams. It's also good that a lot of the money you pay for tickets goes back to the community. See, there's a whole program of concerts, mainly blues, that are sponsored by community oriented organizations, such as,B University Activity Center, Project Community, ínter Cooperative Council, Trotter House, etc. , and the profits from the concerts are then returned back to these organizations. Buddy Guy had just finished a killer set with Junior Wells. I ran out of mixer. I decided to go backstage because with all those people back there I figured there must be some mixer of some kind. I went into Muddy Water's dressing room and found a hard party goin on inside. Muddy, his son, Barbara Holliday, and some friends of everybody's were there. I found some ginger ale and mixed a drink. Muddy was drinking champagne (I guess that's all he drinks nowadays). Barbara had southern Comfort. All of us were tokin. Everyone was cleary getting high. After we jived for a while about how nice Southern Comfort is and how strong I made my drinks, Junior Wells walked in and signed some posters with his name and with Muddy's. Everything slowed way down for some reason. I kept thinking it was because Muddy was pissed at Junior. I don't know, but I was definitly getting bummed out by some bad vibes from somewhere, until Fred McDowell carne in. That dude is such a fine person that I just smile when V I see him. He walks in and says hi to everyone in the room, sits down and asks where people could jam later. And the cloud lifted. I really want to teil you about Fred. He is the kind at dude that will jam with anyone who loves music. ff you ask him a question he'll answer it as well as he can, no matter how long it takes. ff you're jamming with him he'll play soft so you can do some riffs. Fred is so good that much of the time all you can say is, "God damn", how did you do that?" Fred will say, "Come over here, " and he'll show you real slow. Then you try it. A joint went around and I went over to see John Lee Hooker. He was gettin down, and people were diggin it. Then he tells everyone that we're gonna boogie. One minute later people are up off their seats and dancin to the boogie of John Lee Hooker. Lots of energy, and lots of j's lit up. Get down. John finished and Muddy got up to play a knockout set. After two encores the lights carne on and it was over for the night, but not for the year. Look forward to B. B. King, Howlin Wolf , and all the other shows to come at Hill Auditorium this year. Power to the People's Music Power to the People's Organizations