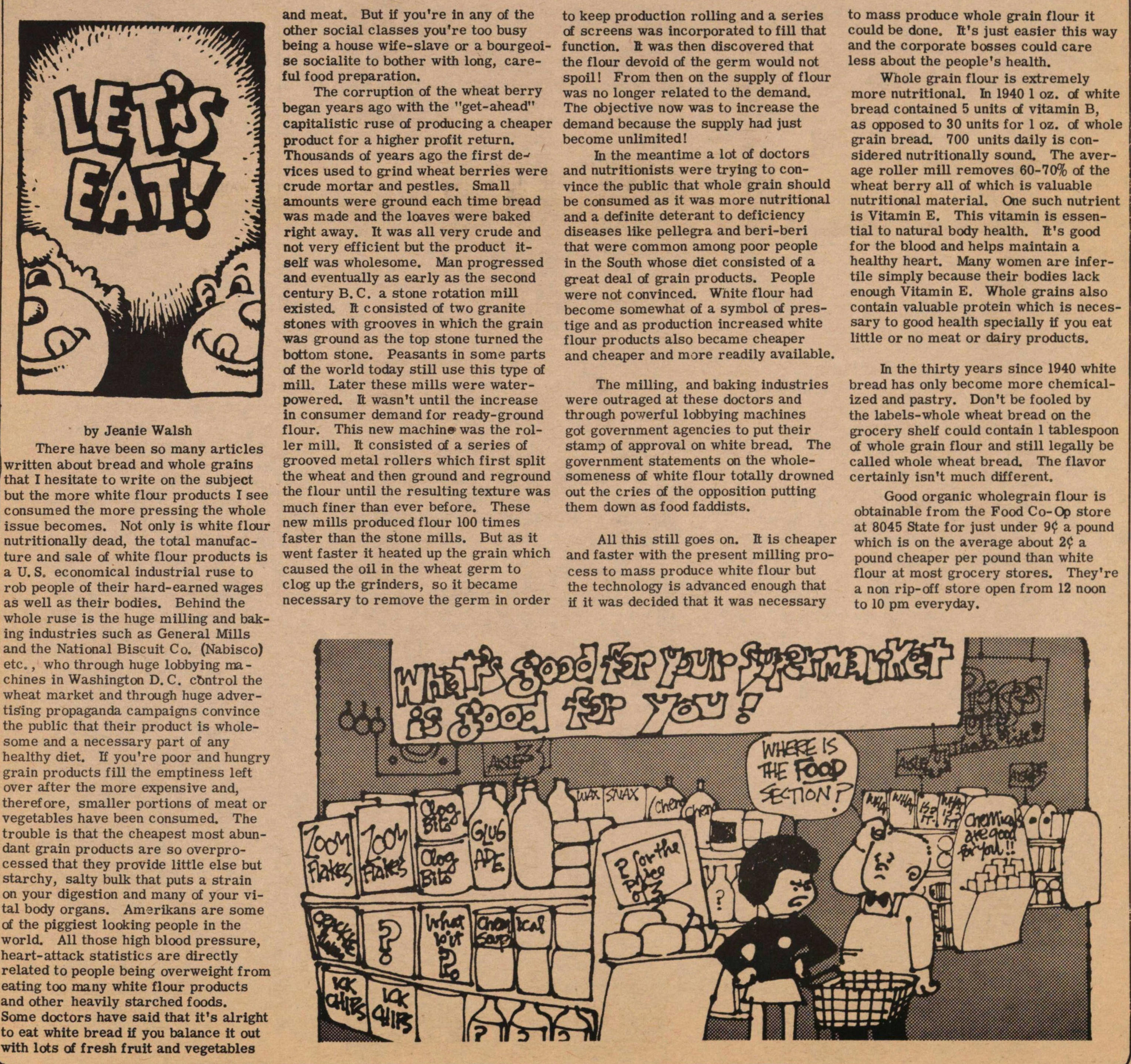 There have been so many articles written about bread and whole grains that I hesitate to write on the subject but the more white flour products I see consumed the more pressing the whole issue becomes. Not only is white flour nutritionally dead, the total manufacture and sale of white flour products is a U.S. economical industrial ruse to rob people of their hard-earned wages as well as their bodies. Behind the whole ruse is the huge milling and baking industries such as General Mills and the National Biscuit Co. (Nabisco) etc., who through huge lobbying machines in Washington D.C. control the wheat market and through huge advertising propaganda campaigns convince the public that their product is wholesome and a necessary part of any healthy diet. If you're poor and hungry grain products fill the emptiness left over after the more expensive and, therefore, smaller portions of meat or vegetables have been consumed. The trouble is that the cheapest most abundant grain products are so over-processed that they provide little else but starchy, salty bulk that puts a strain on your digestion and many of your vital body organs. Amerikans are some of the piggiest looking people in the world. All those high blood pressure, heart-attack statistics are directly related to people being overweight from eating too many white flour products and other heavily starched foods. Some doctors have said that it's alright to eat white bread if you balance it out with lots of fresh fruit and vegetables and meat. But if you're in any of the other social classes you're too busy being a house wife-slave or a bourgeoisie socialite to bother with long, careful food preparation.

The corruption of the wheat berry began years ago with the "get-ahead" capitalistic ruse of producing a cheaper product for a higher profit return. Thousands of years ago the first devices used to grind wheat berries were crude mortar and pestles. Small amounts were ground each time bread was made and the loaves were baked right away. It was all very crude and not very efficient but the product itself was wholesome. Man progressed and eventually as early as the second century B.C. a stone rotation mill existed. It consisted of two granite stones with grooves in which the grain was ground as the top stone turned the bottom stone. Peasants in some parts of the world today still use this type of mill. Later these mills were water-powered. It wasn't until the increase in consumer demand for ready-ground flour. This new machine was the roller mill. It consisted of a series of grooved metal rollers which first split the wheat and then ground and reground the flour until the resulting texture was much finer than ever before. These new mills produced flour 100 times faster than the stone mills. But as it went faster it heated up the grain which caused the oil in the wheat germ to clog up the grinders, so it became necessary to remove the germ in order to keep production rolling and a series of screens was incorporated to fill that function. It was then discovered that the flour devoid of the germ would not spoil! From then on the supply of flour was no longer related to the demand. The objective now was to increase the demand because the supply had just become unlimited!

In the meantime a lot of doctors and nutritionists were trying to convince the public that whole grain should be consumed as it was more nutritional and a definite deterrent to deficiency diseases like pellegra and beri-beri that were common among poor people in the South whose diet consisted of a great deal of grain products. People were not convinced. White flour had become somewhat of a symbol of prestige and as production increased white flour products also became cheaper and cheaper and more readily available.

The milling, and baking industries were outraged at these doctors and through powerful lobbying machines got government agencies to put their stamp of approval on white bread. The government statements on the wholesomeness of white flour totally drowned out the cries of the opposition putting them down as food faddists.

All this still goes on. It is cheaper and faster with the present milling process to mass produce white flour but the technology is advanced enough that if it was decided that it was necessary to mass produce whole grain flour it could be done, It's just easier this way and the corporate bosses could care less about the people's health.

Whole grain flour is extremely more nutritional. In 1940 1 oz. of white bread contained 5 units of vitamin B, as opposed to 30 units for 1 oz. of whole grain bread. 700 units daily is considered nutritionally sound. The average roller mill removes 60-70% of the wheat berry all of which is valuable nutritional material. One such nutrient is Vitamin E. This vitamin is essential to natural body health. It's good for the blood and helps maintain a healthy heart. Many women are infertile simply because their bodies lack enough Vitamin E. Whole grains also contain valuable protein which is necessary to good health specially if you eat little or no meat or dairy products.

In the thirty years since 1940 white bread has only become more chemical-ized and pastry. Don't be fooled by the labels-whole wheat bread on the grocery shelf could contain 1 tablespoon of whole grain flour and still legally be called whole wheat bread. The flavor certainly isn't much different.

Good organic wholegrain flour is obtainable from the Food Co-Op store at 8045 State for just under 9 cents a pound which is on the average about 2 cents a pound cheaper per pound than white flour at most grocery stores. They're a non rip-off store open from 12 noon to 10 pm everyday.