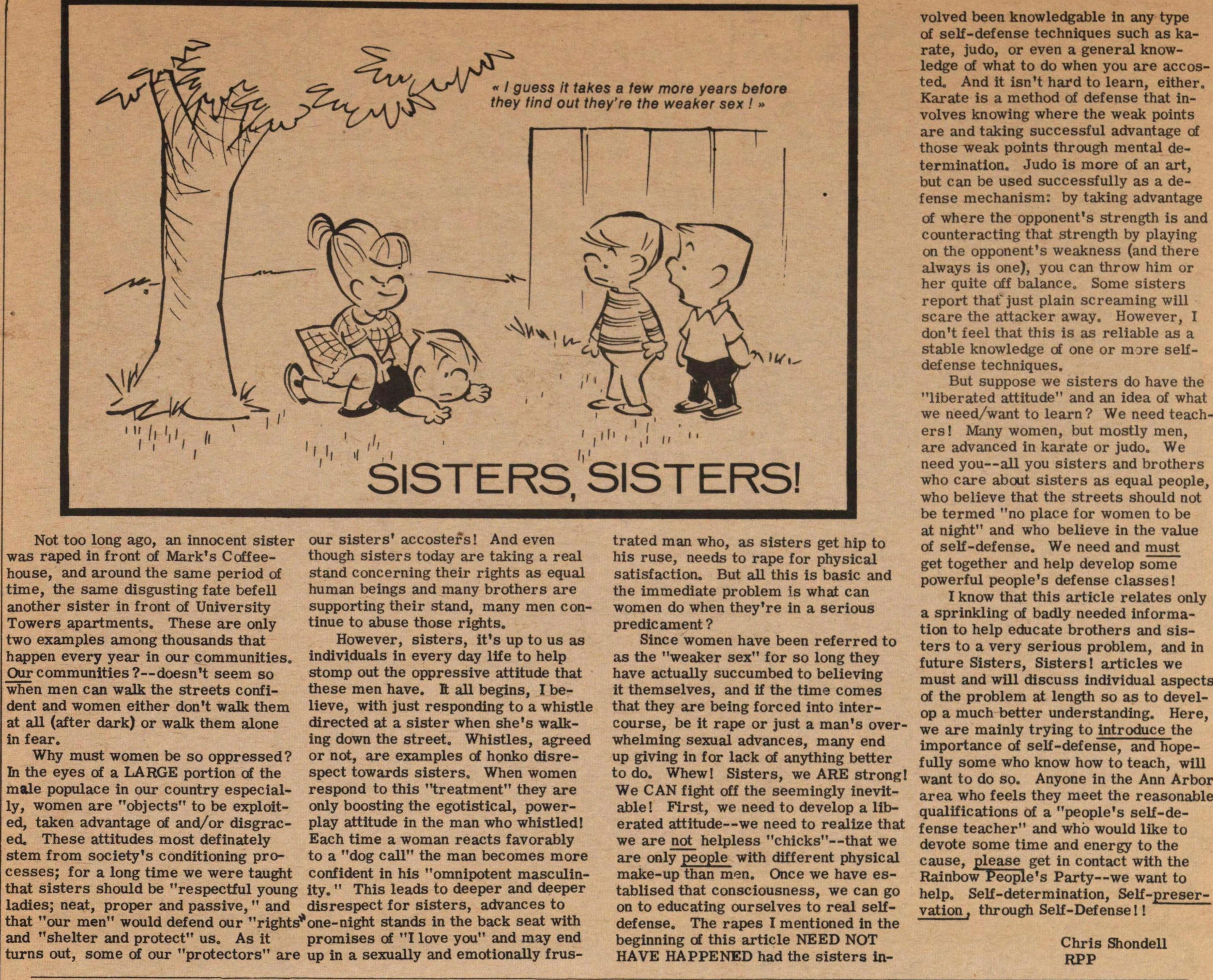 Not too long ago, an innocent sister was raped in front of Mark's Coffeehouse, and around the same period of time, the same disgusting fate befeli another sister in front of University Towers apartments. These are only two examples among thousands that happen every year in our communities. Our communities ?- doesn't seem so when men can walk the streets confident and women either don 't walk them at all (after dark) or walk them alone in fear. Why must women be so oppressed ? In the eyes of a LARGE portion af the male populace in our country especially, women are "objects" to be exploited, taken advantage of andor disgraced. These attitudes most definately stem f rom society 's conditioning processes; for a long time we were taught that sisters should be "respectful young ladies; neat, proper and passive, " and that "our men" would defend our "rights1 and "shelter and protect" us. As it xirns out, some of our "protectors" are our sisters' accosters! And even though sisters today are taking a real stand concerning their rights as equal human beings and many brothers are supporting their stand, many men continue to abuse those rights. However, sisters, it's up to us as individuals in every day lif e to help stomp out the oppressive attitude that these men have. It all begins, I believe, with just responding to a whistle directed at a sister when she's walking down the street. Whistles, agreed or not, are examples cf honko disrespect towards sisters. When women respond to this "treatment" they are only boosting the egotistical, powerplay attitude in the man who whistled! Each time a woman reacts favorably to a "dog cali" the man becomes more confident in his "omnipotent masculinity. " This leads to deeper and deeper disrespect for sisters, advances to 'one-night stands in the back seat with promises of "I love you" and may end up in a sexually and emotionally f trated man who, as sisters get hip to his ruse, needs to rape for physical satisfaction. But all this is basic and the immediate problem is what can women do when they're in a serious predicament? Since women have been referred to as the "weaker sex" for so long they have actually succumbed to believing it themselves, and if the time comes that they are being forced into intercourse, be it rape or just a man's overwhelming sexual advances, many end up giving in for lack of anything better to do. Whew! Sisters, we ARE strong! We CAN fight off the seemingly inevitable ! First, we need to develop a liberated attitude - we need to realize that we are not helpless "chicks" - that we are only people with different physical make-up than men. Once we have establised that consciousness, we can go on to educating ourselves to real selfdefense. The rapes I mentioned in the beginning of this article NEED NOT HAVE HAPPENED had the sisters volved been knowledgable in any type of self-defense techniques such as karate, judo, or even a general knowledge of what to do when you are accosted. And it isn't hard to learn, either. Karate is a method of defense that involves knowing where the weak points are and taking successful advantage of those weak points through mental determination. Judo is more of an art, but can be used successfully as a defense mechanism: by taking advantage of where the opponent's strength is and counteracting that strength by playing on the opponent's weakness (and there always is one), you can throw him or her quite off balance. Some sisters report that' just plain screaming will scare the attacker away. However, I don't feel that this is as reliable as a stable knowledge of one or more selfdefense techniques. But suppose we sisters do have the "liberated attitude" and an idea of what we needwant to learn ? We need teachers ! Many women, but mostly men, are advanced in karate or judo. We need you - all you sisters and brothers who care about sisters as equal people, who believe that the streets should not be termed "no place for women to be at night" and who believe in the value of self-defense. We need and must get together and help develop some powerful people's defense classes! I know that this article relates only a sprinkling of badly needed inf ormation to help edúcate brothers and sisters to a very serious problem, and in future Sisters, Sisters ! articles we must and will discuss individual aspects of the problem at length so as to develop a much better understanding. Here, we are mainly trying to introduce the importance of self-defense, and hopefully some who know how to teach, will want to do so. Anyone in the Ann Arbor area who feels they meet the reasonable qualifications of a "people's self-defense teacher" and whó would like to devote some time and energy to the cause, please get in contact with the Rainbow People's Party - we want to help. Self-determination, Self-preservation , through Self-Def ense 1 !