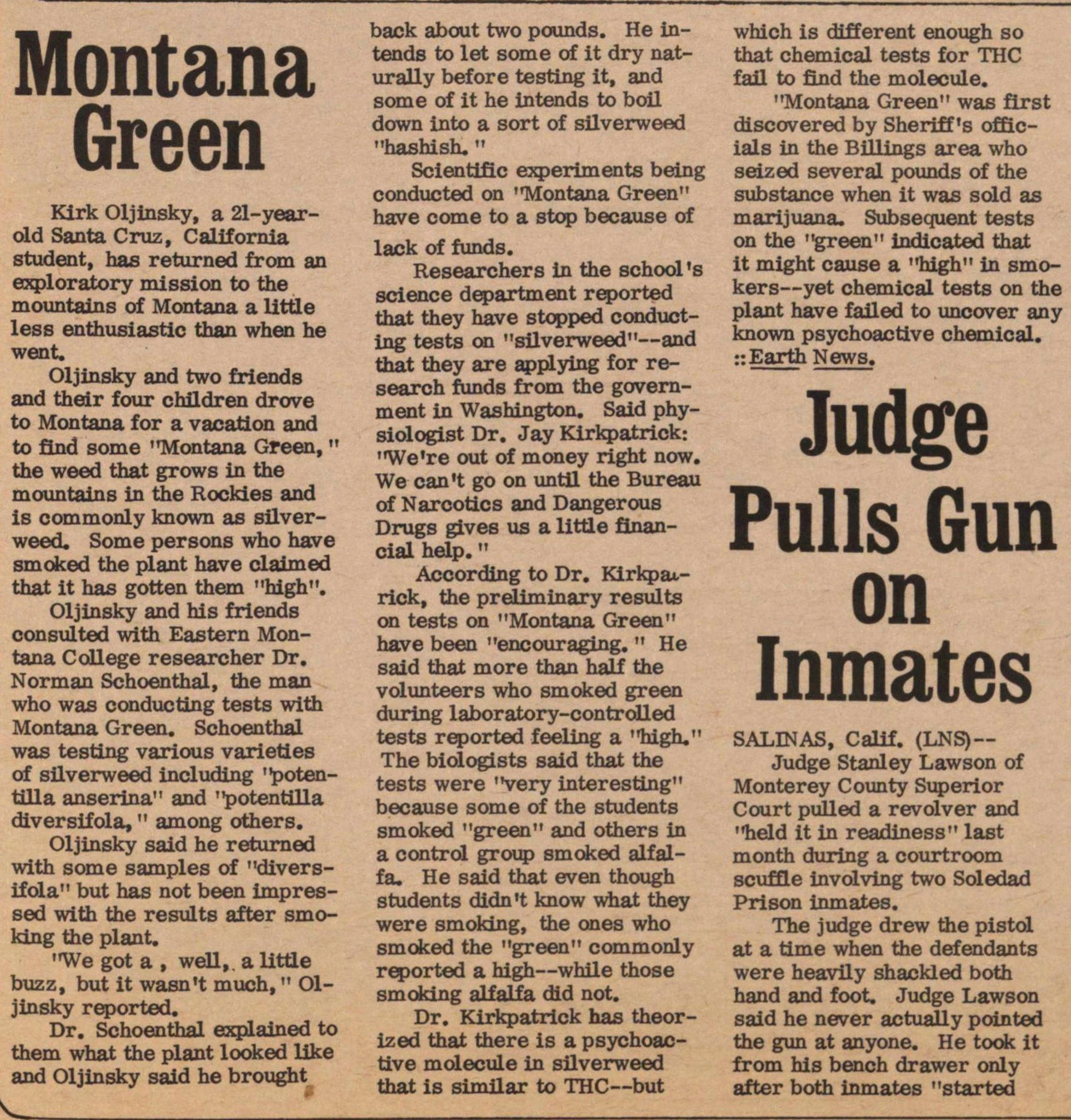 Kirk Oljinsky, a 21-yearold Santa Cruz, California student, has returned from an exploratory mission to the mountains of Montana a litüe less enthusiastic than when he went. Oljinsky and two friends and their four children drove to Montana for a vacation and to ñnd some "Montana Green, " the weed that grows in the mountains in the Rockies and is commonly known as silverweed. Some persons who have smoked the plant have claim ed that it has gotten them "high". Oljinsky and his friends consulted with Eastern Montana College researcher Dr. Norman Schoenthal, the man who was conducüng tests with Montana Green. Schoenthal was testing various varieties of silverweed including "potentilla anserina" and "potentilla diversifola, " among others. Oljinsky said he returned with some samples of "diversifola" but has not been impressed with the results after smoking the plant. "We gota, well, alitüe buzz, but it wasn't much, " Oljinsky reported. Dr. Schoenthal explained to them what the plant looked lik e and Oljinsky said he brought back about two pounds. He intends to let some of it dry naturally before testing it, and some of it he intends to boil down into a sort of silverweed "hashish. " Scientific experimente being conducted on "Montana Green" have come to a stop because of lack of funds. Researcher s in the school 's sdence department reported that they have stopped conducting tests on "silverweed" - and that they are applying for research funds from the government in Washington. Said physiologist Dr. Jay Kirkpatrick: 'We're out of money right now. We can 't go on until the Bureau of Narcotics and Dangerous Drugs gives us a little flnancial help. " According to Dr. Kirkpai.rick, the preliminary resulte on tests on "Montana Green" have been "encouraging. " He said that more than half the volunteers who smoked green during laboratory-controlled tests reported feeling a "high." The biologists said that the tests were "very interesting" because some of the students smoked "green" and others in a control group smoked alfalfa. He said that even though students didn't know what they were smoking, the ones who smoked the "green" commonly reported a high - while those smoking alfalfa did not. Dr. Kirkpatrick has theorized that there is a psychoacüve molecule in silverweed that is similar to THCbut which is different enough so that chemical tests for THC fail to find the molecule. "Montana Green" was first discovered by Sheriff 's officials in the Billings area who seized several pounds of the substance when it was sold as marijuana. Subsequent tests on the "green" indicated that it might cause a "high" in smokersyet chemical tests on the plant have failed to uncover any known psychoactive chemical.