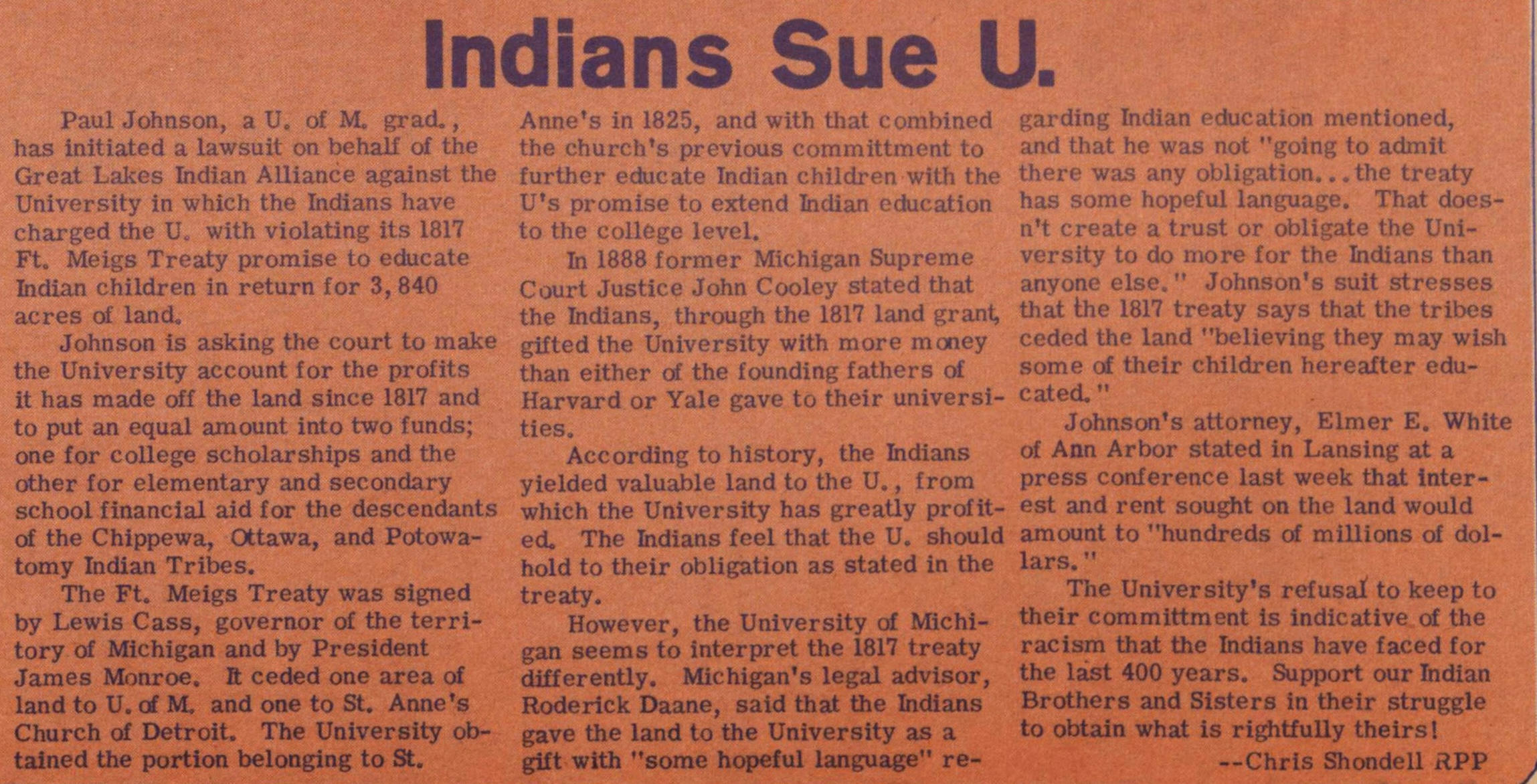 Paul Johnson, a U of M grad., has initiated a lawsuit on behalf of the Great Lakes Indian Alliance against the University in which the Indians have charged the U. with violating its 1817 Ft. Meigs Treaty promise to educate Indian children in return for 3,840 acres of land.

Johnson is asking the court to make the University account for the profits it has made off the land since 1817 and to put an equal amount into two funds; one for college scholarships and the other for elementary and secondary school financial aid for the descendants of the Chippewa, Ottawa, and Potowatomy Indian Tribes.

The Ft. Meigs Treaty was signed by Lewis Cass, governor of the territory of Michigan and by President James Monroe. It ceded one area of land to U. of M. and one to St. Anne's Church of Detroit. The University obtained the portion belonging to St. Anne's in 1825, and with that combined the church's previous commitment to further educate Indian children with the U's promise to extend Indian education to the college level.

In 1888 former Michigan Supreme Court Justice John Cooley stated that the Indians, through the 1817 land grant, gifted the University with more money than either of the founding fathers of Harvard or Yale gave to their universities.

According to history, the Indians yielded valuable land to the U., from which the University has greatly profited. The Indians feel that the U. should hold to their obligation as stated in the treaty.

However, the University of Michigan seems to interpret the 1817 treaty differently. Michigan's legal advisor, Roderick Daane, said that the Indians gave the land to the University as a gift with "some hopeful language" regarding Indian education mentioned, and that he was not "going to admit there was any obligation ... the treaty has some hopeful language. That doesn't create a trust or obligate the University to do more for the Indians than anyone else." Johnson's suit stresses that the 1817 treaty says that the tribes ceded the land "believing they may wish some of their children hereafter educated."

Johnson's attorney, Elmer E. White of Ann Arbor stated in Lansing at a press conference last week that interest and rent sought on the land would amount to "hundreds of millions of dollars."

The University's refusal to keep to their commitment is indicative of the racism that the Indians have faced for the last 400 years. Support our Indian Brothers and Sisters in their struggle to obtain what is rightfully theirs!