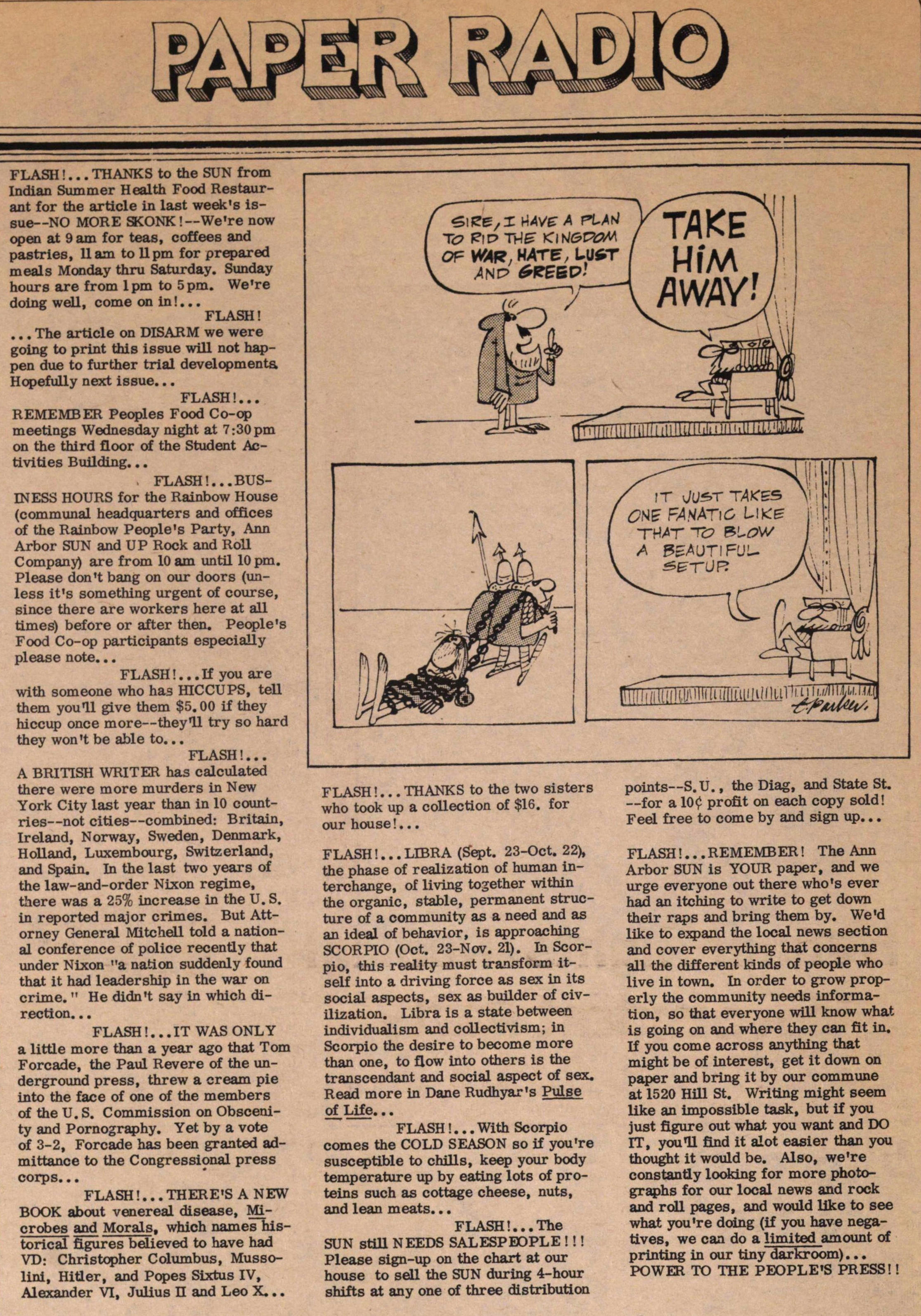 FLASH ! . . . THANKS to the SUN from Indian Summer Health Food Restaurant for the article in last week's issue--NO MORE SKONK!--We're now open at 9am for teas, coffees and pastries, 11am to 11pm for prepared meals Monday thru Saturday. Sunday hours are from 1pm to 5pm. We're doing well, come on in! . . .

FLASH! . . . The article on DISARM we were going to print this issue will not happen due to further trial developments, Hopefully next issue. . .

FLASH!. . . BUSINESS HOURS for the Rainbow House (communal headquarters and offices of the Rainbow People's Party, Ann Arbor SUN and UP Rock and Roll Company) are from 10am until 10pm. Please don 't bang on our doors (unless it's something urgent of course, since there are workers here at all times) before or after then. People's Food Co-op participants especially please note. . .

FLASH! . . . A BRITISH WRITER has calculated there were more murders in New York City last year than in 10 countries--not cities--combined: Britain, Ireland, Norway, Sweden, Denmark, Holland, Luxembourg, Switzerland, and Spain. In the last two years of the law-and-order Nixon regime, there was a 25% increase in the U.S. in reported major crimes. But Attorney General Mitchell told a national conference of police recently that under Nixon "a nation suddenly found that it had leadership in the war on crime." He didn't say in which direction. . .

FLASH! . . . IT WAS ONLY a little more than a year ago that Torn Forcade, the Paul Revere of the underground press, threw a cream pie into the face of one of the members of the U.S. Commission on Obscenity and Pornography. Yet by a vote of 3-2, Forcade has been granted admittance to the Congressional press corps. . .

FLASH! . . . LIBRA (Sept. 23-Oct. 22), the phase of realization of human interchange, of living together within the organic, stable, permanent structure of a community as a need and as an ideal of behavior, is approaching SCORPIO (Oct. 23-Nov. 21). In Scorpio, this reality must transform itself into a driving force as sex in its social aspects, sex as builder of civilization. Libra is a state between individualism and collectivism; in Scorpio the desire to become more than one, to flow into others is the transcendent and social aspect of sex. Read more in Dane Rudhyar's Pulse of Life. . .

FLASH! . . . With Scorpio comes the COLD SEASON so if you're susceptible to chills, keep your body temperature up by eating lots of proteins such as cottage cheese, nuts, and lean meats. . . .

FLASH! . . . REMEMBER! The Ann Arbor SUN is YOUR paper, and we urge everyone out there who's ever had an itching to write to get down their raps and bring them by. We'd like to expand the local news section and cover everything that concerns all the different kinds of people who live in town. In order to grow properly the community needs information, so that everyone will know what is going on and where they can fit in. If you come across anything that might be of interest, get it down on paper and bring it by our commune at 1520 Hill St. Writing might seem like an impossible task, but if you just figure out what you want and DO IT, you'll find it a lot easier than you thought it would be. Also, we 're constantly looking for more photographs for our local news and rock and roll pages, and would like to see what you 're doing (if you have negatives, we can do a limited amount of printing in our tiny darkroom) . . .

POWER TO THE PEOPLE'S PRESS! !