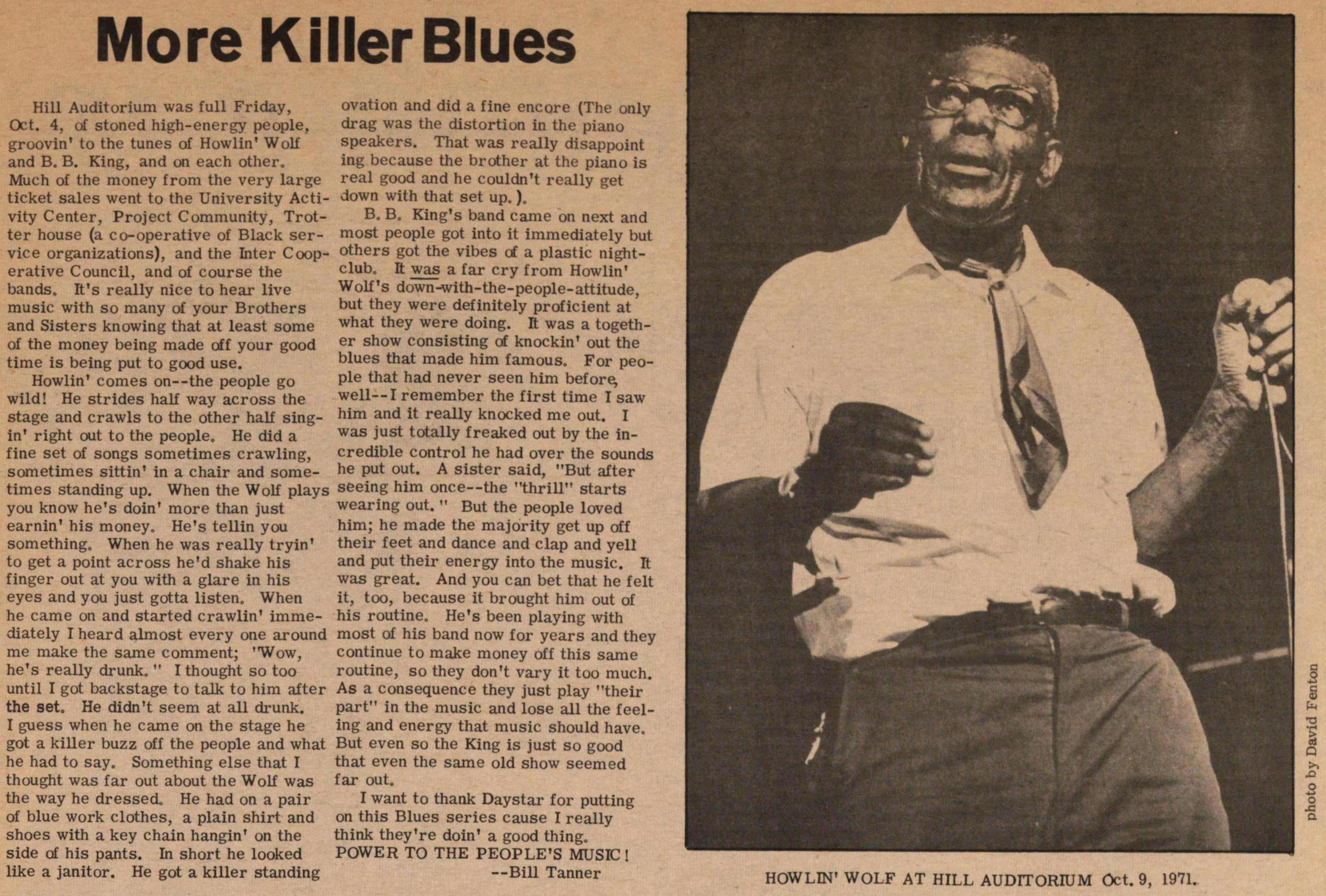 Hill Auditorium was full Friday, Oct. 4, of stoned high-energy people, groovin' to the tunes of Howlin' Wolf and B. B. King, and on each other. Much of the money from the very large ticket sales went to the University Activity Center, Project Community, Trotter house (a co-operative of Black service organizations), and the Inter Cooperative Council, and of course the bands. It's really nice to hear live music with so many of your Brothers and Sisters knowing that at least some of the money being made off your good time is being put to good use.

Howlin' comes on - the people go wild! He strides half way across the stage and crawls to the other half singin' right out to the people. He did a fine set of songs sometimes crawling, sometimes sittin' in a chair and sometimes standing up. When the Wolf plays you know he's doin' more than just earnin' his money. He's tellin' you something. When he was really tryin' to get a point across he'd shake his finger out at you with a glare in his eyes and you just gotta listen. When he carne on and started crawlin' immediately I heard almost every one around me make the same comment; "Wow, he's really drunk." I thought so too until I got backstage to talk to him after the set. He didn't seem at all drunk. I guess when he carne on the stage he got a killer buzz off the people and what he had to say. Something else that I thought was far out about the Wolf was the way he dressed. He had on a pair of blue work clothes, a plain shirt and shoes with a key chain hangin' on the side of his pants. In short he looked like a janitor. He got a killer standing ovation and did a fine encore (The only drag was the distortion in the piano speakers. That was really disappoint ing because the brother at the piano is real good and he couldn't really get down with that set up.).

B. B. King's band carne on next and most people got into it immediately but others got the vibes of a plastic nightclub. It was a far cry from Howlin' Wolf's down-with-the-people-attitude, but they were definitely proficient at what they were doing. It was a together show consisting of knockin' out the blues that made him famous. For people that had never seen him before, well--I remember the first time I saw him and it really knocked me out. I was just totally freaked out by the incredible control he had over the sounds he put out. A sister said, "But after seeing him once--the "thrill" starts wearing out." But the people loved him; he made the majority get up off their feet and dance and clap and yell and put their energy into the music. It was great. And you can bet that he felt it, too, because it brought him out of his routine. He's been playing with most of his band now for years and they continue to make money off this same routine, so they don't vary it too much. As a consequence they just play "their part" in the music and lose all the feeling and energy that music should have. But even so the King is just so good that even the same old show seemed far out.

I want to thank Daystar for putting on this Blues series cause I really think they're doin' a good thing.

POWER TO THE PEOPLE'S MUSIC!