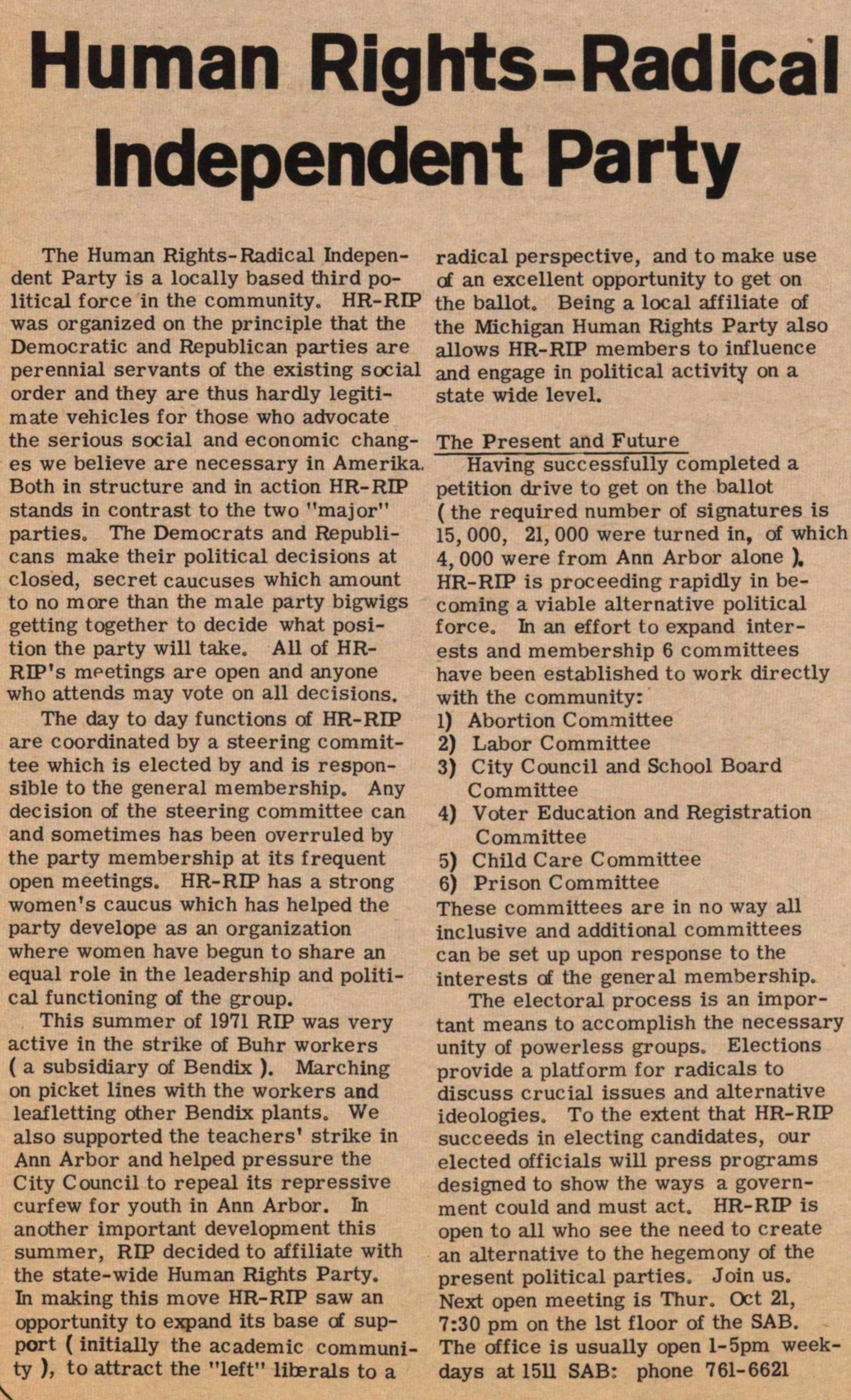 The Human Radical Independent Party is a locally based third political force in the community. HR-RIP was organized on the principle that the Democratic and Republican parties are perennial servants of the existing social order and they are thus hardly legitimate vehicles for those who advocate the serious social and economic changes we believe are necessary in Amerika. Both in structure and in action HR-RIP stands in contrast to the two "major" parties. The Democrats and Republicans make their political decisions at closed, secret caucuses which amount to no more than the male party bigwigs getting together to decide what position the party will take. All of HR-RIP's meetings are open and anyone who attends may vote on all decisions.

The day to day functions of HR-RIP are coordinated by a steering committee which is elected by and is responsible to the general membership. Any decision of the steering committee can and sometimes has been overruled by the party membership at its frequent open meetings. HR-RIP has a strong women's caucus which has helped the party develop as an organization where women have begun to share an equal role in the leadership and political functioning of the group.

This summer of 1971 RIP was very active in the strike of Buhr workers (a subsidiary of Bendix). Marching on picket lines with the workers and leafletting other Bendix plants. We also supported the teachers' strike in Ann Arbor and helped pressure the City Council to repeal its repressive curfew for youth in Ann Arbor. In another important development this summer, RIP decided to affiliate with the state-wide Human Rights Party. In making this move HR-RIP saw an opportunity to expand its base of support (initially the academic community), to attract the "left" liberals to a radical perspective, and to make use of an excellent opportunity to get on the ballot. Being a local affiliate of the Michigan Human Rights Party also allows HR-RIP members to influence and engage in political activity on a state wide level.

The Present and Future

Having successfully completed a petition drive to get on the ballot (the required number of signatures is 15,000, 21,000 were turned in, of which 4,000 were from Ann Arbor alone). HR-RIP is proceeding rapidly in becoming a viable alternative political force. In an effort to expand interests and membership 6 committees have been established to work directly with the community: 1) Abortion Committee 2) Labor Committee 3) City Council and School Board Committee 4) Voter Education and Registration Committee 5) Child Care Committee 6) Prison Committee

These committees are in no way all inclusive and additional committees can be set up upon response to the interests of the general membership.

The electoral process is an important means to accomplish the necessary unity of powerless groups. Elections provide a platform for radicals to discuss crucial issues and alternative ideologies. To the extent that HR-RIP succeeds in electing candidates, our elected officials will press programs designed to show the ways a government could and must act. HR-RIP is open to all who see the need to create an alternative to the hegemony of the present political parties. Join us. Next open meeting is Thur. Oct 21, 7:30 pm on the 1st floor of the SAB. The office is usually open 1 - 5 pm weekdays at 1511 SAB: phone 761-6621