"i Have Identified My 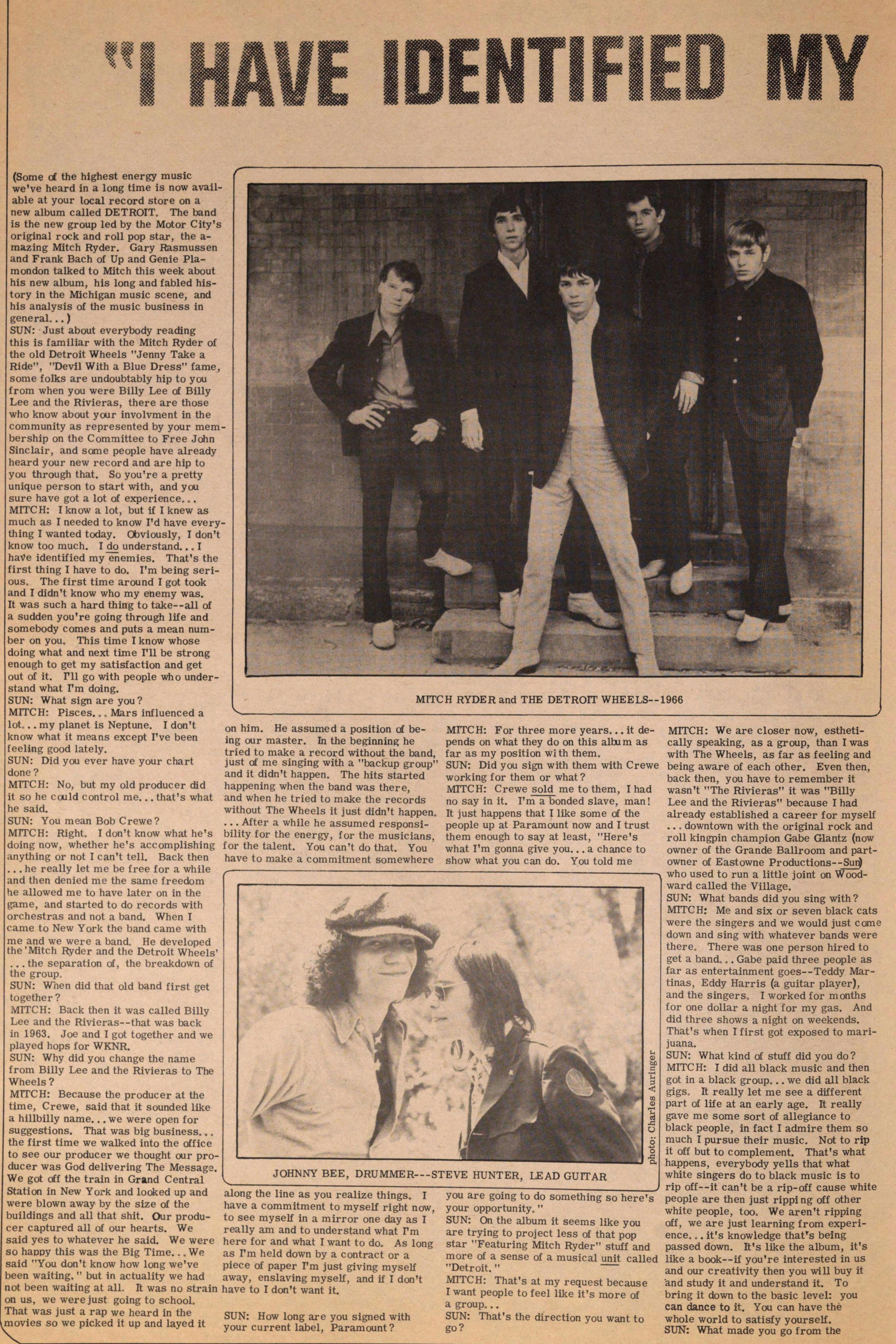 (Some of the highest energy music we've heard in a long time is now available at your local record store on a new album called DETROIT. The band is the new group led by the Motor City's original rock and roll pop star, the amazing Mitch Ryder. Gary Rasmussen and Frank Bach of Up and Genie Plamondon talked to Mitch this week about his new album, his long and fabled history in the Michigan music scene, and his analysis of the music business in general. . . )

SUN: Just about everybody reading this is familiar with the Mitch Ryder of the old Detroit Wheels "Jenny Take a Ride", "Devil With a Blue Dress" fame, some folks are undoubtably hip to you from when you were Billy Lee of Billy Lee and the Rivieras, there are those who know about your involvement in the community as represented by your membership on the Committee to Free John Sinclair, and some people have already heard your new record and are hip to you through that. So you're a pretty unique person to start with, and you sure have got a lot of experience. . .

MITCH: I know a lot, but if I knew as much as I needed to know I'd have everything I wanted today. Obviously, I don't know too much. I do understand...I have identified my enemies. That's the first thing I have to do. I'm being serious. The first time around I got took and I didn't know who my enemy was. It was such a hard thing to take--all of a sudden you're going through life and somebody comes and puts a mean number on you. This time I know whose doing what and next time I'll be strong enough to get my satisfaction and get out of it. I'll go with people who understand what I'm doing.

MITCH: Pisces...Mars influenced a lot...my planet is Neptune. I don't know what it means except I've been feeling good lately.

SUN: Did you ever have your chart done?

MTTCH: No, but my old producer did it so he could control me...that's what he said.

MITCH: Right. I don't know what he's doing now, whether he's accomplishing anything or not I can't tell. Back then...he really let me be free for a while and then denied me the same freedom he allowed me to have later on in the game, and started to do records with orchestras and not a band. When I came to New York the band came with me and we were a band. He developed the 'Mitch Ryder and the Detroit Wheels'...the separation of , the breakdown of the group.

SUN: When did that old band first get together?

MITCH: Back then it was called Billy Lee and the Rivieras--that was back in 1963. Joe and I got together and we played hops for WKNR.

SUN: Why did you change the name from Billy Lee and the Rivieras to The Wheels?

MITCH: Because the producer at the time, Crewe, said that it sounded like a hillbilly name...we were open for suggestions. That was big business...the first time we walked into the office to see our producer we thought our producer was God delivering The Message. We got off the train in Grand Central Station in New York and looked up and were blown away by the size of the buildings and all that shit. Our producer captured all of our hearts. We said yes to whatever he said. We were so happy this was the Big Time...We said "You don't know how long we've been waiting," but in actuality we had not been waiting at all. It was no strain on us, we were just going to school. That was just a rap we heard in the movies so we picked it up and layed it on him. He assumed a position of being our master. In the beginning he tried to make a record without the band, just of me singing with a "backup group" and it didn't happen. The hits started happening when the band was there, and when he tried to make the records without The Wheels it just didn't happen...After a while he assumed responsibility for the energy, for the musicians, for the talent. You can't do that. You have to make a commitment somewhere along the line as you realize things. I have a commitment to myself right now, to see myself in a mirror one day as I really am and to understand what I'm here for and what I want to do. As long as I'm held down by a contract or a piece of paper I'm just giving myself away, enslaving myself, and if I don't have to I don't want it.

SUN: How long are you signed with your current label, Paramount?

MITCH: For three more years...it depends on what they do on this album as far as my position with them.

SUN: Did you sign with them with Crewe working for them or what?

MITCH: Crewe sold me to them, I had no say in it. I'm a bonded slave, man! It just happens that I like some of the people up at Paramount now and I trust them enough to say at least, "Here's what I'm gonna give you...a chance to show what you can do. You told me you are going to do something so here's your opportunity."

SUN: On the album it seems like you are trying to project less of that pop star "Featuring Mitch Ryder" stuff and more of a sense of a musical unit called "Detroit."

MITCH: That's at my request because I want people to feel like it's more of a group...

SUN: That's the direction you want to go?

MITCH: We are closer now, esthetically speaking, as a group, than I was with The Wheels, as far as feeling and being aware of each other. Even then, back then, you have to remember it wasn't "The Rivieras" it was "Billy Lee and the Rivieras" because I had already established a career f or myself...downtown with the original rock and roll kingpin Champion Gabe Glantz (now owner of the Grande Ballroom and part-owner of Eastowne Productions--Sun) who used to run a little joint on Woodward called the Village.

SUN: What bands did you sing with?

MITCH: Me and six or seven black cats were the singers and we would just come down and sing with whatever bands were there. There was one person hired to get a band...Gabe paid three people as far as entertainment goes--Teddy Martinas, Eddy Harris (a guitar player), and the singers. I worked for months for one dollar a night for my gas. And did three shows a night on weekends. That's when I first got exposed to marijuana.

SUN: What kind of stuff did you do?

MITCH: I did all black music and then got in a black group...we did all black gigs. It really let me see a different part of life at an early age. It really gave me some sort of allegiance to black people, in fact I admire them so much I pursue their music. Not to rip it off but to compliment. That's what happens, everybody yells that what white singers do to black music is to rip off--it can't be a rip-off cause white people are then just ripping off other white people, too. We aren't ripping off, we are just learning from experience...it's knowledge that's being passed down. It's like the album, it's like a book--if you're interested in us and our creativity then you will buy it and study it and understand it. To bring it down to the basic level: you can dance to it. You can have the whole world to satisfy yourself.

SUN: What made you go from the