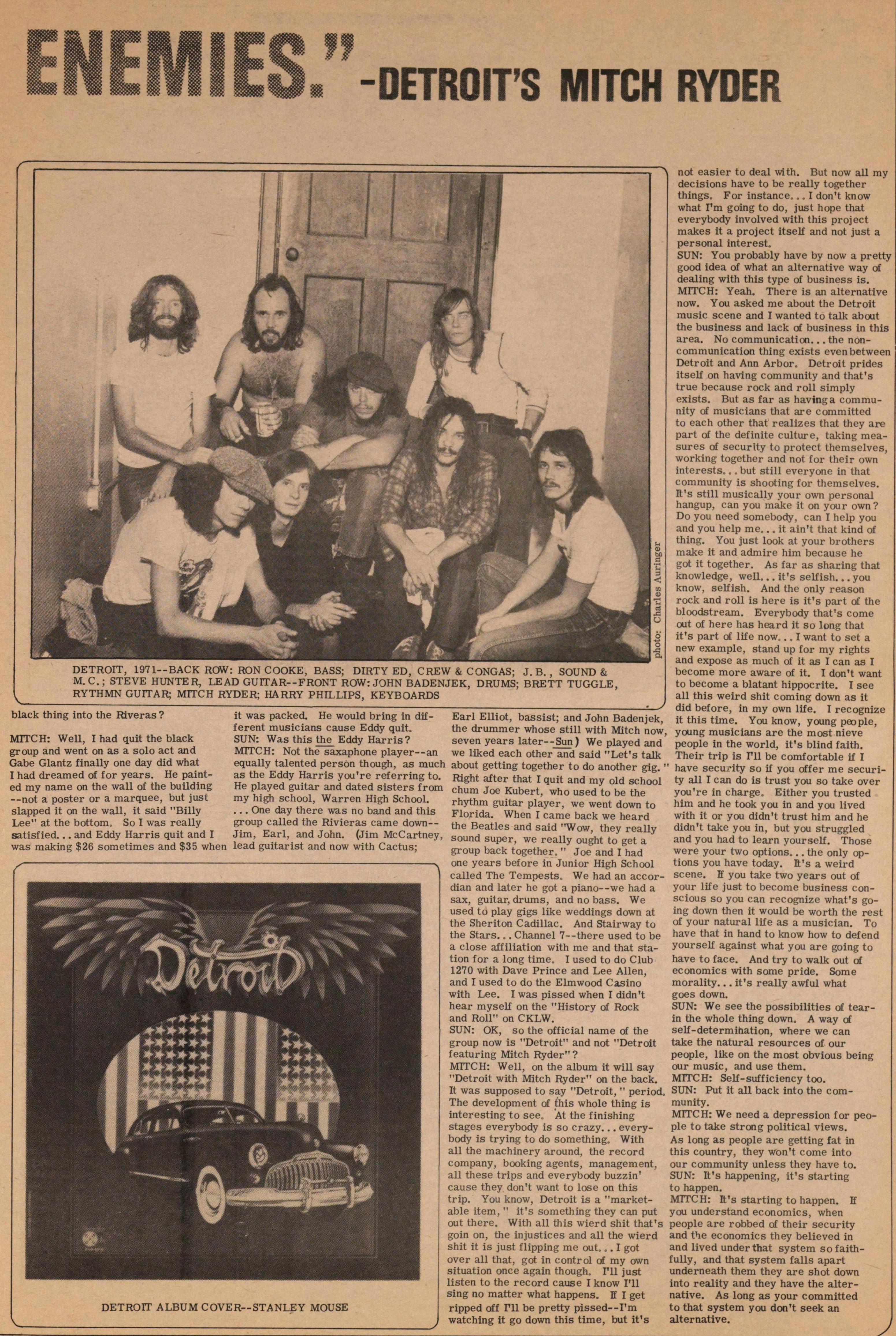 black thing into the Riveras?

MITCH: Well, I had quit the black group and went on as a solo act and Gabe Glantz finally one day did what I had dreamed of for years. He painted my name on the wall of the building--not a poster or a marquee, but just slapped it on the wall, it said "Billy Lee" at the bottom. So I was really satisfied...and Eddy Harris quit and I was making $26 sometimes and $35 when it was packed. He would bring in different musicians cause Eddy quit.

SUN: Was this the Eddy Harris?

MITCH: Not the saxophone player--an equally talented person though, as much as the Eddy Harris you're referring to. He played guitar and dated sisters from my high school, Warren High School...One day there was no band and this group called the Rivieras came down--Jim, Earl, and John. (Jim McCartney, lead guitarist and now with Cactus; Earl Elliot, bassist; and John Badenjek, the drummer whose still with Mitch now, seven years later--Sun) We played and we liked each other and said "Let's talk about getting together to do another gig." Right after that I quit and my old school chum Joe Kubert, who used to be the rhythm guitar player, we went down to Florida. When I carne back we heard the Beatles and said "Wow, they really sound super, we really ought to get a group back together." Joe and I had one years before in Junior High School called The Tempests. We had an accordion and later he got a piano--we had a sax, guitar, drums, and no bass. We used to play gigs like weddings down at the Sheriton Cadillac. And Stairway to the Stars...Channel 7--there used to be a close affiliation with me and that station for a long time. I used to do Club 1270 with Dave Prince and Lee Allen, and I used to do the Elmwood Casino with Lee. I was pissed when I didn't hear myself on the "History of Rock and Roll" on CKLW.

SUN: OK, so the official name of the group now is "Detroit" and not "Detroit featuring Mitch Ryder"?

MITCH: Well, on the album it will say "Detroit with Mitch Ryder" on the back. It was supposed to say "Detroit," period. The development of this whole thing is interesting to see. At the finishing stages everybody is so crazy...everybody is trying to do something. With all the machinery around, the record company, booking agents, management, all these trips and everybody buzzin' cause they don't want to lose on this trip. You know, Detroit is a "marketable item," it's something they can put out there. With all this weird shit that 's goin on, the injustices and all the weird shit it is just flipping me out...I got over all that, got in control of my own situation once again though. I'll just listen to the record cause I know I'll sing no matter what happens. If I get ripped off I'll be pretty pissed--I'm watching it go down this time, but it's not easier to deal with. But now all my decisions have to be really together things. For instance...I don't know what I'm going to do, just hope that everybody involved with this project makes it a project itself and not just a personal interest.

SUN: You probably have by now a pretty good idea of what an alternative way of dealing with this type of business is.

MITCH: Yeah. There is an alternative now. You asked me about the Detroit music scene and I wanted to talk about the business and lack of business in this area. No communication...the non-communication thing exists even between Detroit and Ann Arbor. Detroit prides itself on having community and that's true because rock and roll simply exists. But as far as having a community of musicians that are committed to each other that realizes that they are part of the definite culture, taking measures of security to protect themselves, working together and not for their own interests...but still everyone in that community is shooting for themselves. It's still musically your own personal hangup, can you make it on your own? Do you need somebody, can I help you and you help me...it ain't that kind of thing. You just look at your brothers make it and admire him because he got it together. As far as sharing that knowledge, well...it's selfish. . . you know, selfish. And the only reason rock and roll is here is it's part of the bloodstream. Everybody that's come out of here has heard it so long that it's part of life now...I want to set a new example, stand up for my rights and expose as much of it as I can as I become more aware of it. I don't want to become a blatant hypocrite. I see all this weird shit coming down as it did before, in my own life. I recognize it this time. You know, young people, young musicians are the most naive people in the world, it's blind faith. Their trip is I'll be comfortable if I have security so if you offer me security all I can do is trust you so take over you're in charge. Either you trusted him and he took you in and you lived with it or you didn't trust him and he didn't take you in, but you struggled and you had to learn yourself. Those were your two options...the only options you have today. It's a weird scene, if you take two years out of your life just to become business conscious so you can recognize what's going down then it would be worth the rest of your natural life as a musician. To have that in hand to know how to defend yourself against what you are going to have to face. And try to walk out cf economics with some pride. Some morality...it's really awful what goes down.

SUN: We see the possibilities of tearin' the whole thing down. A way of self-determination, where we can take the natural resources of our people, like on the most obvious being our music, and use them.

SUN: Put it all back into the community.

MITCH: We need a depression for people to take strong political views. As long as people are getting fat in this country, they won't come into our community unless they have to.

SUN: It's happening, it's starting to happen.

MITCH: It's starting to happen. If you understand economics, when people are robbed of their security and the economics they believed in and lived under that system so faithfully, and that system falls apart underneath them they are shot down into reality and they have the alternative. As long as you're committed to that system you don't seek an alternative.