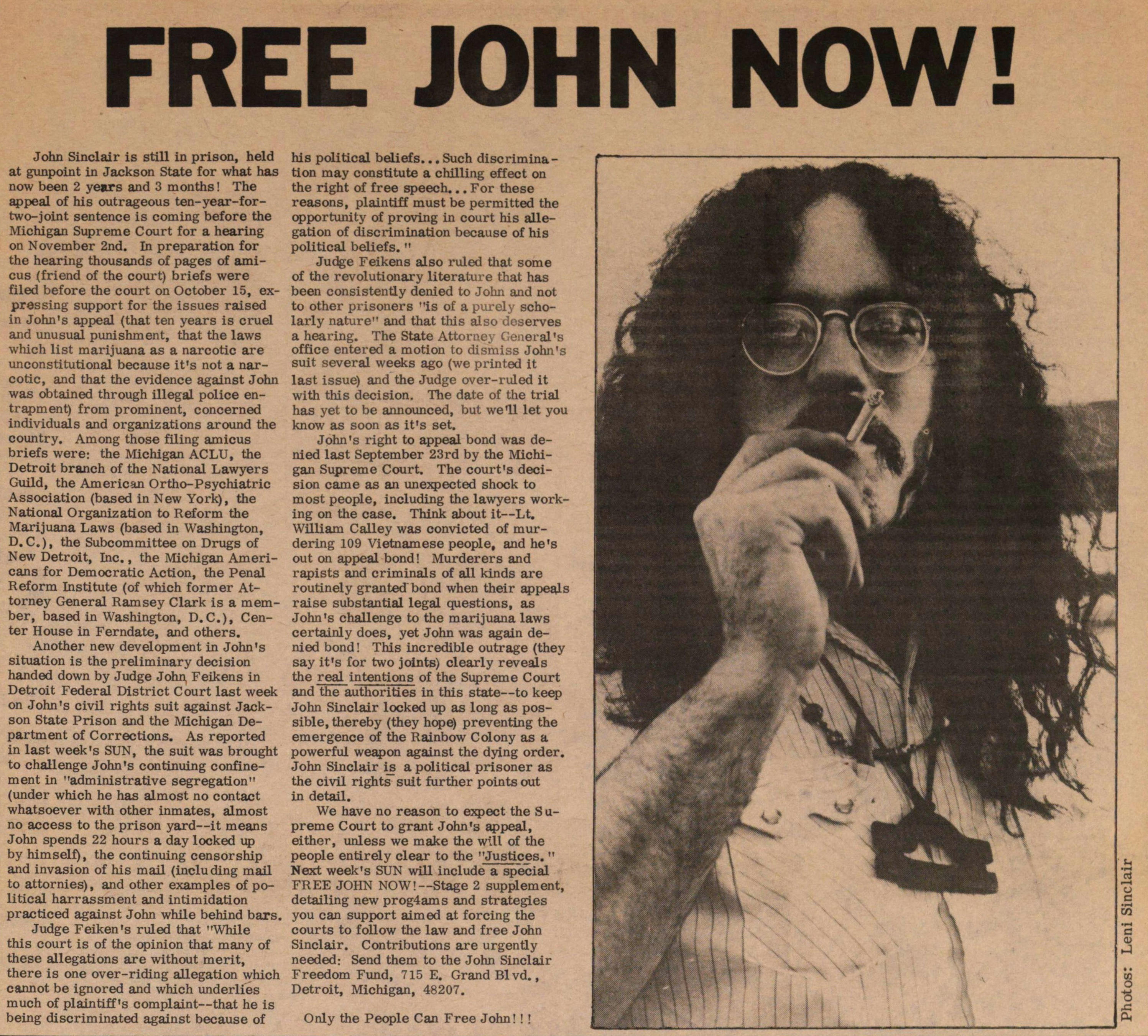 John Sinclair is still in prison, held at gunpoint in Jackson State for what has now been 2 yeiurs and 3 months! The appeal of his outrageous ten-year-for-two-joint sentence is coming before the Michigan Supreme Court for a hearing on November 2nd. In preparation for the hearing thousands of pages of amicus (friend of the court) briefs were filed before the court on October 15, expressing support for the issues raised in John's appeal (that ten years is cruel and unusual punishment, that the laws which list marijuana as a narcotic are unconstitutional because it's not a narcotic, and that the evidence against John was obtained through illegal police entrapment) from prominent, concerned individuals and organizations around the country. Among those filing amicus briefs were: the Michigan ACLU, the Detroit branch of the National Lawyers Guild, the American Ortho-Psychiatric Association (based in New York), the National Organization to Reform the Marijuana Laws (based in Washington, D.C.), the Subcommittee on Drugs of New Detroit, Inc., the Michigan Americans for Democratic Action, the Penal Reform Institute (of which former Attorney General Ramsey Clark is a member, based in Washington, D.C.), Center House in Ferndate, and others.

Another new development in John's situation is the preliminary decision handed down by Judge John, Feikens in Detroit Federal District Court last week on John's civil rights suit against Jackson State Prison and the Michigan Department of Corrections. As reported in last week's SUN, the suit was brought to challenge John's continuing confinement in "administrative segregation" (under which he has almost no contact whatsoever with other inmates, almost no access to the prison yard--it means John spends 22 hours a day locked up by himself), the continuing censorship and invasion of his mail (including mail to attorneys), and other examples of political harassment and intimidation practiced against John while behind bars.

Judge Feiken's ruled that "While this court is of the opinion that many of these allegations are without merit, there is one over-riding allegation which cannot be ignored and which underlies much of plaintiff's complaint--that he is being discriminated against because of his political beliefs...Such discrimination may constitute a chilling effect on the right of free speech...For these reasons, plaintiff must be permitted the opportunity of proving in court his allegation of discrimination because of his political beliefs."

Judge Feikens also ruled that some of the revolutionary literature that has been consistently denied to John and not to other prisoners "is of a purely scholarly nature" and that this also deserves a hearing. The State Attorney General's office entered a motion to dismiss John's suit several weeks ago (we printed it last issue) and the Judge over-ruled it with this decision. The date of the trial has yet to be announced, but we'll let you know as soon as it's set.

John's right to appeal bond was denied last September 23rd by the Michigan Supreme Court. The court's decision came as an unexpected shock to most people, including the lawyers working on the case. Think about it--Lt. William Calley was convicted of murdering 109 Vietnamese people, and he's out on appeal bond! Murderers and rapists and criminals of all kinds are routinely granted bond when their appeals raise substantial legal questions, as John's challenge to the marijuana laws certainly does, yet John was again denied bond! This incredible outrage (they say it's for two joints) clearly reveals the real intentions of the Supreme Court and the authorities in this state--to keep John Sinclair locked up as long as possible, thereby (they hope) preventing the emergence of the Rainbow Colony as a powerful weapon against the dying order. John Sinclair is a political prisoner as the civil rights suit further points out in detail.

We have no reason to expect the Supreme Court to grant John's appeal, either, unless we make the will of the people entirely clear to the "Justices." Next week's SUN will include a special FREE JOHN NOW!--Stage 2 supplement, detailing new programs and strategies you can support aimed at forcing the courts to follow the law and free John Sinclair. Contributions are urgently needed: Send them to the John Sinclair Freedom Fund, 715 E. Grand Blvd., Detroit, Michigan, 48207.

Only the People Can Free John! ! !