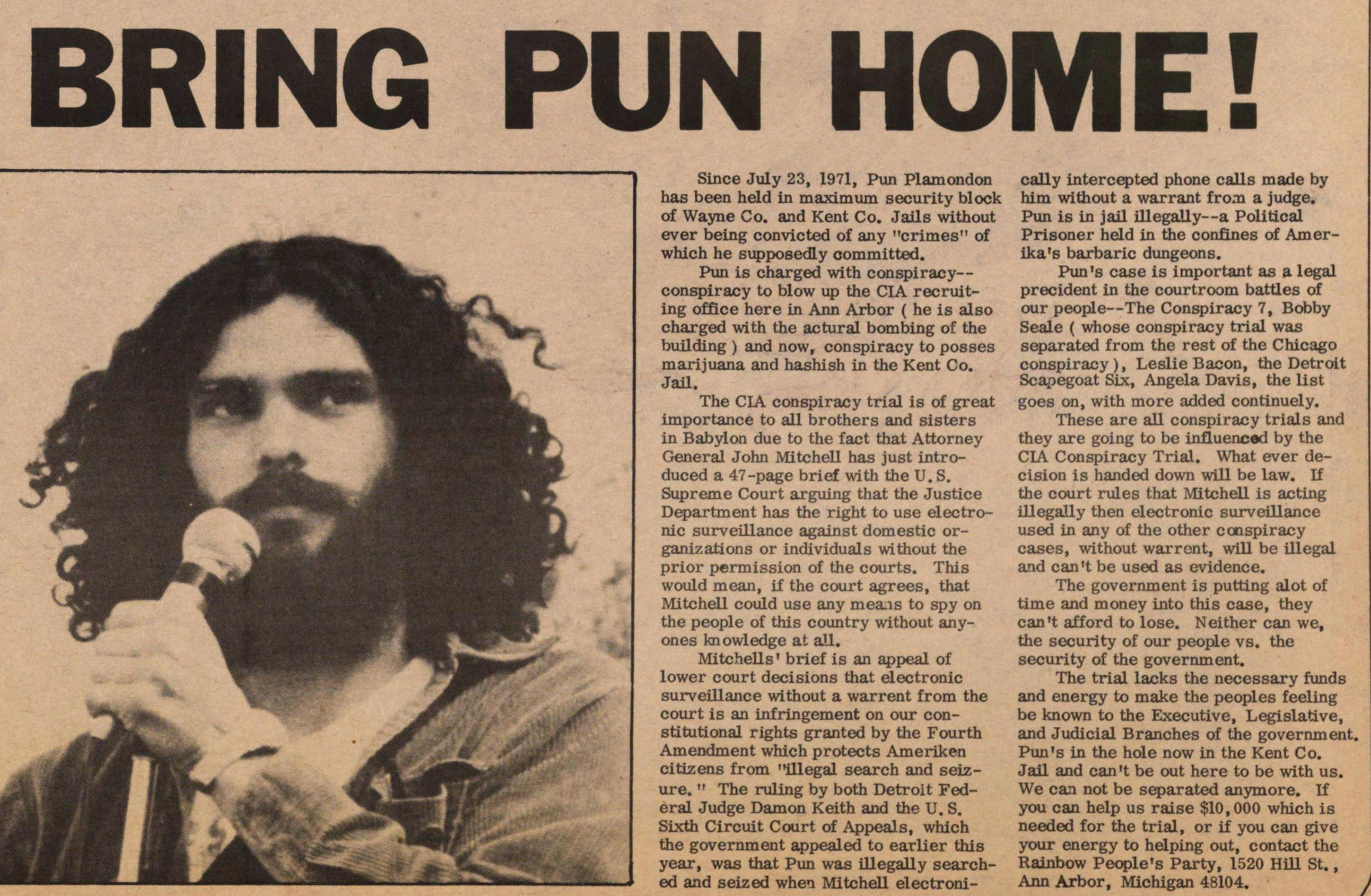 Since July 23, 1971, Pun Plamondon has been held in maximum security block of Wayne Co. and Kent Co. Jails without ever being convicted of any "crimes" of which he supposedly committed.

The CIA conspiracy trial is of great importance to all brothers and sisters in Babylon due to the fact that Attorney General John Mitchell has just introduced a 47-page brief with the U. S. Supreme Court arguing that the Justice Department has the right to use electronic surveillance against domestic organizations or individuals without the prior permission of the courts. This would mean, if the court agrees, that Mitchell could use any means to spy on the people of this country without anyone's knowledge at all.

Mitchells' brief is an appeal of lower court decisions that electronic surveillance without a warrant from the court is an infringement on our constitutional rights granted by the Fourth Amendment which protects Ameriken citizens from "illegal search and seizure." The ruling by both Detroit Federal Judge Damon Keith and the U. S. Sixth Circuit Court of Appeals, which the government appealed to earlier this year, was that Pun was illegally searched and seized when Mitchell electronically intercepted phone calls made by him without a warrant from a judge. Pun is in jail illegally--a Political Prisoner held in the confines of Amerika's barbaric dungeons.

Pun's case is important as a legal precedent in the courtroom battles of our people--The Conspiracy 7, Bobby Seale (whose conspiracy trial was separated from the rest of the Chicago conspiracy), Leslie Bacon, the Detroit Scapegoat Six, Angela Davis, the list goes on, with more added continually.

These are all conspiracy trials and they are going to be influenced by the CIA Conspiracy Trial. What ever decision is handed down will be law. If the court rules that Mitchell is acting illegally then electronic surveillance used in any of the other conspiracy cases, without warrant, will be illegal and can't be used as evidence. The government is putting a lot of time and money into this case, they can't afford to lose. Neither can we, the security of our people vs. the security of the government.

The trial lacks the necessary funds and energy to make the peoples feeling be known to the Executive, Legislative, and Judicial Branches of the government. Pun's in the hole now in the Kent Co. Jail and can't be out here to be with us. We can not be separated anymore. If you can help us raise $10,000 which is needed for the trial, or if you can give your energy to helping out, contact the Rainbow People's Party, 1520 Hill St., Ann Arbor, Michigan 48104.