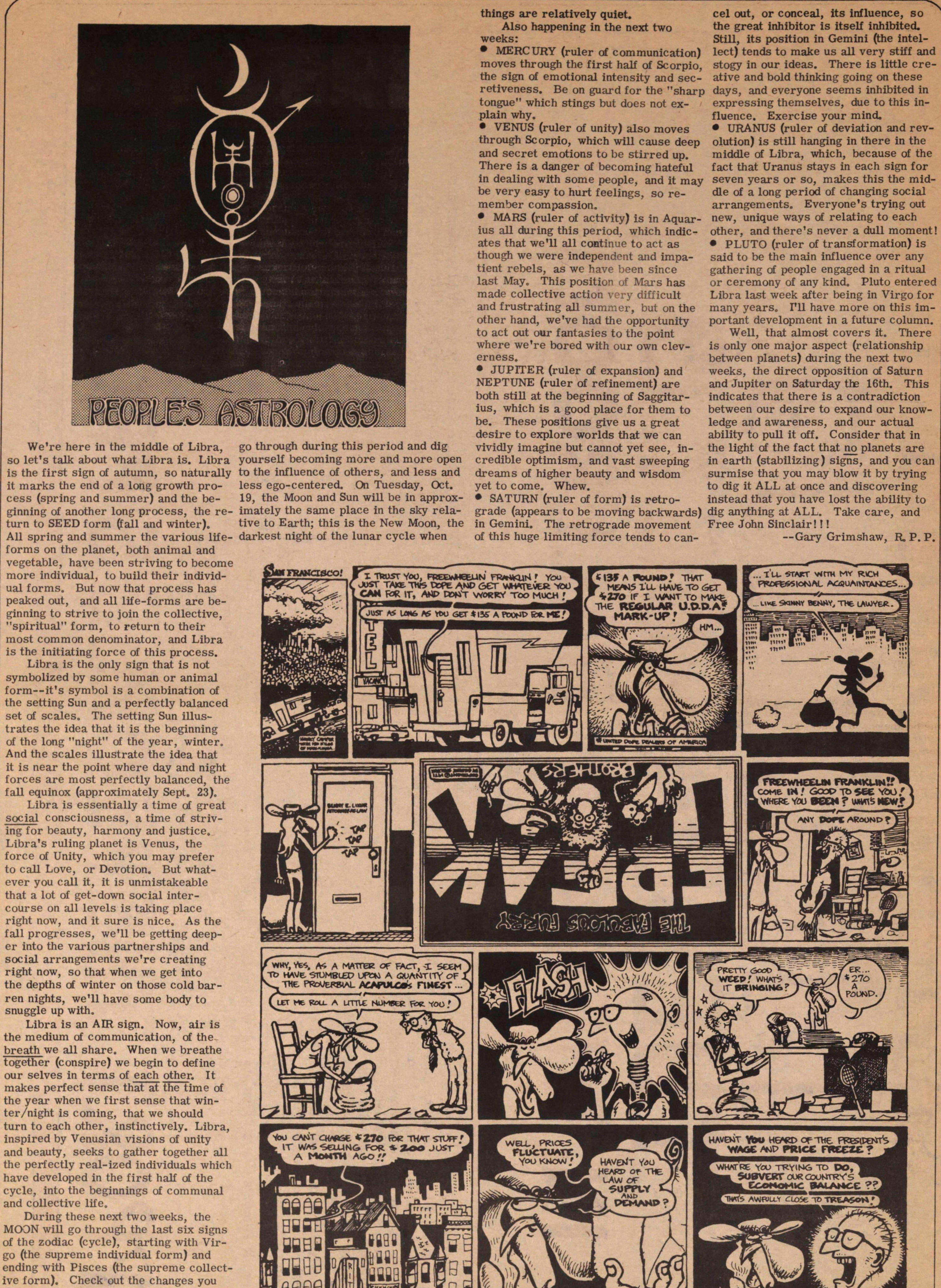 We're here in the middle of Libra, so let's talk about what Libra is. Libra is the first sign of autumn, so naturally it marks the end of a long growth process (spring and summer) and the beginning of another long process, the return to SEED form (fall and winter). All spring and summer the various lifeforms on the planet, both animal and vegetable, have been striving to become more individual, to build their individual forms. But now that process has peaked out, and all life-forms are beginning to strive to join the collective, "spiritual" form, to return to their most common denominator, and Libra is the initiating force of this process.

Libra is the only sign that is not symbolized by some human or animal form--it's symbol is a combination of the setting Sun and a perfectly balanced set of scales. The setting Sun illustrates the idea that it is the beginning of the long "night" of the year, winter. And the scales illustrate the idea that it is near the point where day and night forces are most perfectly balanced, the fall equinox (approximately Sept. 23).

Libra is essentially a time of great social consciousness, a time of striving for beauty, harmony and justice. Libra's ruling planet is Venus, the force of Unity, which you may prefer to call Love, or Devotion. But whatever you call it, it is unmistakable that a lot of get-down social intercourse on all levels is taking place right now, and it sure is nice. As the fall progresses, we'll be getting deeper into the various partnerships and social arrangements we're creating right now, so that when we get into the depths of winter on those cold barren nights, we'll have some body to snuggle up with.

Libra is an AIR sign. Now, air is the medium of communication, of the breath we all share. When we breathe together (conspire) we begin to define our selves in terms of each other. It makes perfect sense that at the time of the year when we first sense that winter/night is coming, that we should turn to each other, instinctively. Libra, inspired by Venusian visions of unity and beauty, seeks to gather together all the perfectly real-ized individuals which have developed in the first half of the cycle, into the beginnings of communal and collective life.

Daring these next two weeks, the MOON will go through the last six signs of the zodiac (cycle), starting with Virgo (the supreme individual form) and ending with Pisces (the supreme collective form). Check out the changes you go through during this period and dig yourself becoming more and more open to the influence of others, and less and less ego-centered. On Tuesday, Oct. 19, the Moon and Sun will be in approximately the same place in the sky relative to Earth; this is the New Moon, the darkest night of the lunar cycle when things are relatively quiet.

Also happening in the next two weeks:

■ MERCURY (ruler of communication) moves through the first half of Scorpio, the sign of emotional intensity and secretiveness. Be on guard for the "sharp tongue" which stings but does not explain why.

■ VENUS (ruler of unity) also moves through Scorpio, which will cause deep and secret emotions to be stirred up. There is a danger of becoming hateful in dealing with some people, and it may be very easy to hurt feelings, so remember compassion.

■ MARS (ruler of activity) is in Aquarius all during this period, which indicates that we'll all continue to act as though we were independent and impatient rebels, as we have been since last May. This position of Mars has made collective action very difficult and frustrating all summer, but on the other hand, we've had the opportunity to act out our fantasies to the point where we're bored with our own cleverness.

■ JUPITER (ruler of expansion) and NEPTUNE (ruler of refinement) are both still at the beginning of Sagittarius, which is a good place for them to be. These positions give us a great desire to explore worlds that we can vividly imagine but cannot yet see, incredible optimism, and vast sweeping dreams of higher beauty and wisdom yet to come. Whew.

■ SATURN (ruler of form) is retrograde (appears to be moving backwards) in Gemini. The retrograde movement of this huge limiting force tends to cancel out, or conceal, its influence, so the great inhibitor is itself inhibited. Still, its position in Gemini (the intellect) tends to make us all very stiff and stogy in our ideas. There is little creative and bold thinking going on these days, and everyone seems inhibited in expressing themselves, due to this influence. Exercise your mind.

■ URANUS (ruler of deviation and revolution) is still hanging in there in the middle of Libra, which, because of the fact that Uranus stays in each sign for seven years or so, makes this the middle of a long period of changing social arrangements. Everyone's trying out new, unique ways of relating to each other, and there's never a dull moment!

■ PLUTO (ruler of transformation) is said to be the main influence over any gathering of people engaged in a ritual or ceremony of any kind. Pluto entered Libra last week after being in Virgo for many years. I'll have more on this important development in a future column.

Well, that almost covers it. There is only one major aspect (relationship between planets) during the next two weeks, the direct opposition of Saturn and Jupiter on Saturday the 16th. This indicates that there is a contradiction between our desire to expand our knowledge and awareness, and our actual ability to pull it off. Consider that in the light of the fact that no planets are in earth (stabilizing) signs, and you can surmise that you may blow it by trying to dig it ALL at once and discovering instead that you have lost the ability to dig anything at ALL. Take care, and Free John Sinclair!!!