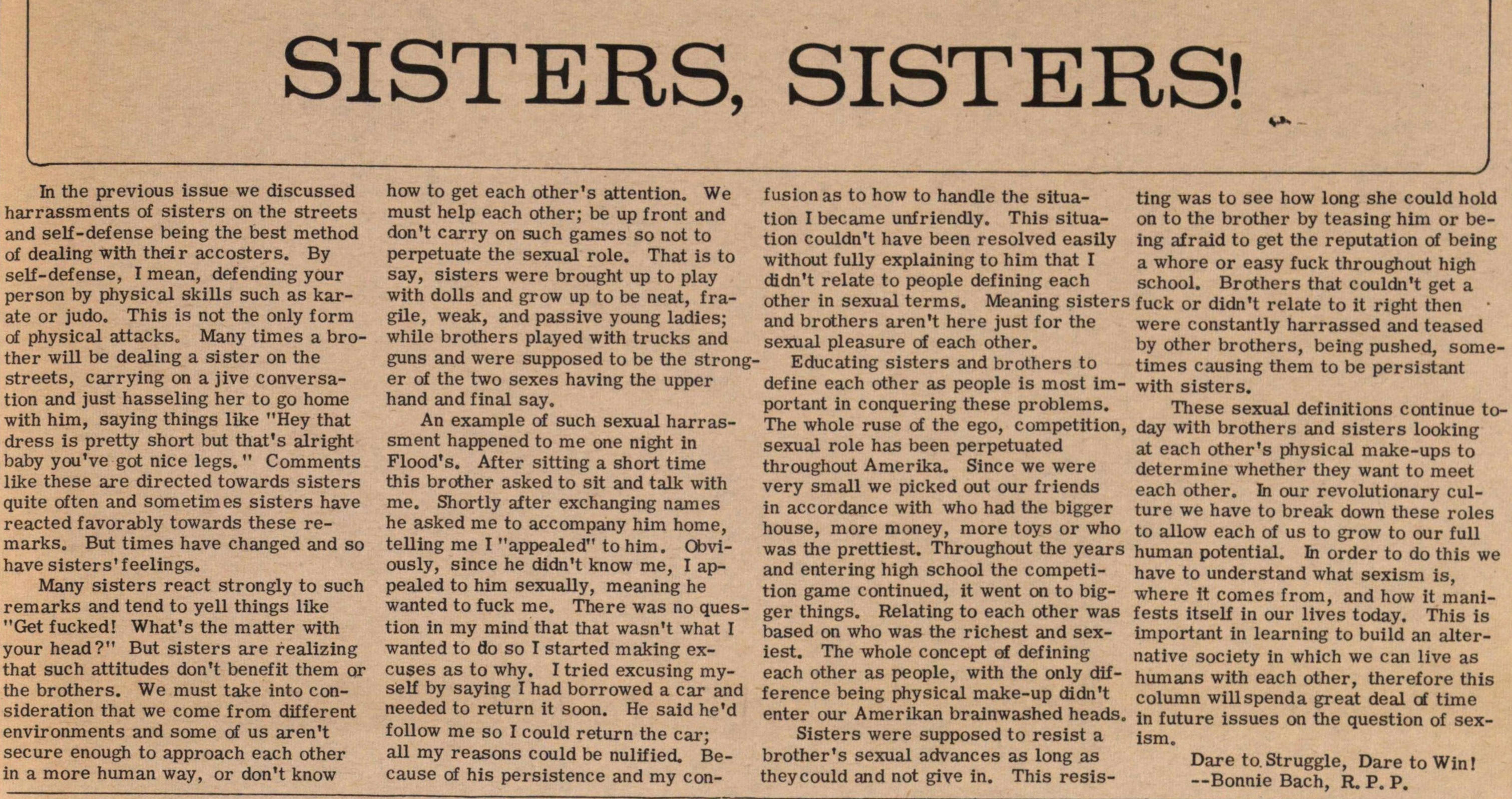 In the previous issue we discussed harassments of sisters on the streets and self-defense being the best method of dealing with their accosters. By self-defense, I mean, defending your person by physical skills such as karate or judo. This is not the only form of physical attacks. Many times a brother will be dealing a sister on the streets, carrying on a jive conversation and just hassling her to go home with him, saying things like "Hey that dress is pretty short but that's alright baby you've got nice legs. " Comments like these are directed towards sisters quite often and sometimes sisters have reacted favorably towards these remarks. But times have changed and so have sisters' feelings.

Many sisters react strongly to such remarks and tend to yell things like "Get fucked! What's the matter with your head?" But sisters are realizing that such attitudes don't benefit them or the brothers. We must take into consideration that we come from different environments and some of us aren't secure enough to approach each other in a more human way, or don't know how to get each other's attention. We must help each other; be up front and don't carry on such games so not to perpetuate the sexual role. That is to say, sisters were brought up to play with dolls and grow up to be neat, fragile, weak, and passive young ladies; while brothers played with trucks and guns and were supposed to be the stronger of the two sexes having the upper hand and final say.

An example of such sexual harassment happened to me one night in Flood's. After sitting a short time this brother asked to sit and talk with me. Shortly after exchanging names he asked me to accompany him home, telling me I "appealed" to him. Obviously, since he didn't know me, I appealed to him sexually, meaning he wanted to fuck me. There was no question in my mind that that wasn't what I wanted to do so I started making excuses as to why. I tried excusing myself by saying I had borrowed a car and needed to return it soon. He said he'd follow me so I could return the car; all my reasons could be nullified. Because of his persistence and my confusion as to how to handle the situation I became unfriendly. This situation couldn't have been resolved easily without fully explaining to him that I didn't relate to people defining each other in sexual terms. Meaning sisters and brothers aren't here just for the sexual pleasure of each other.

Educating sisters and brothers to define each other as people is most important in conquering these problems. The whole ruse of the ego, competition, sexual role has been perpetuated throughout Amerika. Since we were very small we picked out our friends in accordance with who had the bigger house, more money, more toys or who was the prettiest. Throughout the years and entering high school the competition game continued, it went on to bigger things. Relating to each other was based on who was the richest and sexiest. The whole concept of defining each other as people, with the only difference being physical make-up didn't enter our Amerikan brainwashed heads.

Sisters were supposed to resist a brother's sexual advances as long as they could and not give in. This resisting was to see how long she could hold on to the brother by teasing him or being afraid to get the reputation of being a whore or easy fuck throughout high school. Brothers that couldn't get a fuck or didn't relate to it right then were constantly harassed and teased by other brothers, being pushed, sometimes causing them to be persistent with sisters.

These sexual definitions continue today with brothers and sisters looking at each other's physical make-ups to determine whether they want to meet each other. In our revolutionary culture we have to break down these roles to allow each of us to grow to our full human potential. In order to do this we have to understand what sexism is, where it comes from, and how it manifests itself in our lives today. This is important in learning to build an alternative society in which we can live as humans with each other, therefore this column will spend a great deal of time in future issues on the question of sexism.

Dare to Struggle, Dare to Win!