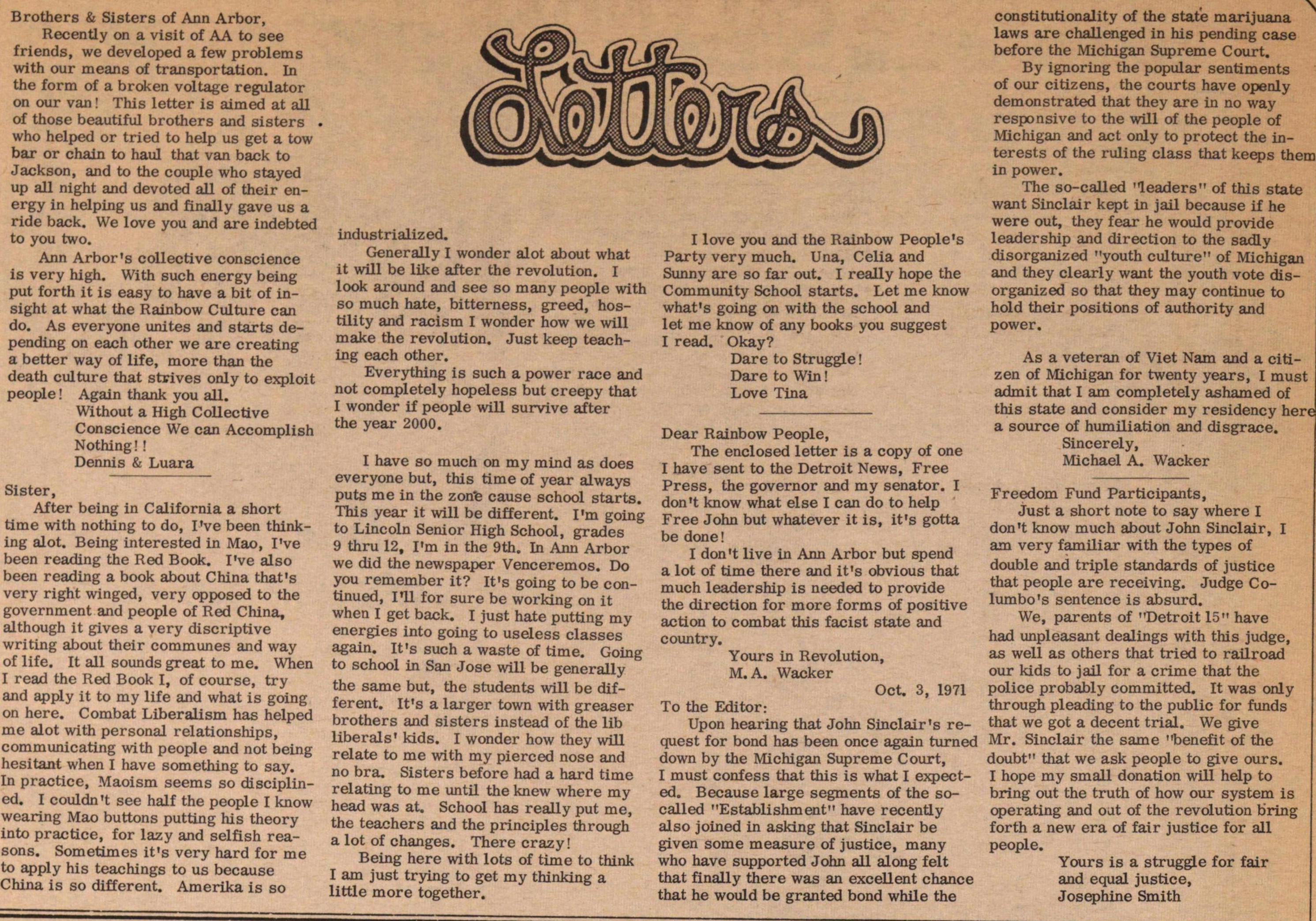 Recently on a visit of AA to see friends, we developed a few problems with our means of transportation. In the form of a broken voltage regulator on our van! This letter is aimed at all of those beautiful brothers and sisters who helped or tried to help us get a tow bar or chain to haul that van back to Jackson, and to the couple who stayed up all night and devoted all of their energy in helping us and finally gave us a ride back. We love you and are indebted to you two.

Ann Arbor 's collective conscience is very high. With such energy being put forth it is easy to have a bit of insight at what the Rainbow Culture can do. As everyone unites and starts depending on each other we are creating a better way of life, more than the death culture that strives only to exploit people! Again thank you all.

Without a High Collective Conscience We can Accomplish Nothing!!
Dennis & Luara

After being in California a short time with nothing to do, I've been thinking a lot. Being interested in Mao, I've been reading the Red Book. I've also been reading a book about China that's very right winged, very opposed to the government and people of Red China, although it gives a very descriptive writing about their communes and way of life. It all sounds great to me. When I read the Red Book I, of course, try and apply it to my life and what is going on here. Combat Liberalism has helped me a lot with personal relationships, communicating with people and not being hesitant when I have something to say. In practice, Maoism seems so disciplined. I couldn't see half the people I know wearing Mao buttons putting his theory into practice, for lazy and selfish reasons. Sometimes it's very hard for me to apply his teachings to us because China is so different. Amerika is so industrialized.

Generally I wonder a lot about what it will be like after the revolution. I look around and see so many people with so much hate, bitterness, greed, hostility and racism I wonder how we will make the revolution. Just keep teaching each other.

Everything is such a power race and not completely hopeless but creepy that I wonder if people will survive after the year 2000.

I have so much on my mind as does everyone but, this time of year always puts me in the zone cause school starts. This year it will be different. I'm going to Lincoln Senior High School, grades 9 thru 12, I'm in the 9th. In Ann Arbor we did the newspaper Venceremos. Do you remember it? It's going to be continued, I'll for sure be working on it when I get back. I just hate putting my energies into going to useless classes again. It's such a waste of time. Going to school in San Jose will be generally the same but, the students will be different. It's a larger town with greaser brothers and sisters instead of the lib liberals' kids. I wonder how they will relate to me with my pierced nose and no bra. Sisters before had a hard time relating to me until they knew where my head was at. School has really put me, the teachers and the principles through a lot of changes. They're crazy!

Being here with lots of time to think I am just trying to get my thinking a little more together.

I love you and the Rainbow People's Party very much. Una, Celia and Sunny are so far out. I really hope the Community School starts. Let me know what's going on with the school and let me know of any books you suggest I read. Okay?

The enclosed letter is a copy of one I have sent to the Detroit News, Free Press, the governor and my senator. I don't know what else I can do to help Free John but whatever it is, it's gotta be done!

I don't live in Ann Arbor but spend a lot of time there and it's obvious that much leadership is needed to provide the direction for more forms of positive action to combat this fascist state and country.

Yours in Revolution,
M. A. Wacker

Upon hearing that John Sinclair 's request for bond has been once again turned down by the Michigan Supreme Court, I must confess that this is what I expected. Because large segments of the so-called "Establishment" have recently also joined in asking that Sinclair be given some measure of justice, many who have supported John all along felt that finally there was an excellent chance that he would be granted bond while the constitutionality of the state marijuana laws are challenged in his pending case before the Michigan Supreme Court.

By ignoring the popular sentiments of our citizens, the courts have openly demonstrated that they are in no way responsive to the will of the people of Michigan and act only to protect the interests of the ruling class that keeps them in power.

The so-called "leaders" of this state want Sinclair kept in jail because if he were out, they fear he would provide leadership and direction to the sadly disorganized "youth culture" of Michigan and they clearly want the youth vote disorganized so that they may continue to hold their positions of authority and power.

As a veteran of Viet Nam and a citizen of Michigan for twenty years, I must admit that I am completely ashamed of this state and consider my residency here a source of humiliation and disgrace.

Just a short note to say where I don't know much about John Sinclair, I am very familiar with the types of double and triple standards of justice that people are receiving. Judge Columbo's sentence is absurd.

We, parents of "Detroit 15" have had unpleasant dealings with this judge, as well as others that tried to railroad our kids to jail for a crime that the police probably committed. It was only through pleading to the public for funds that we got a decent trial. We give Mr. Sinclair the same "benefit of the doubt" that we ask people to give ours. I hope my small donation will help to bring out the truth of how our system is operating and out of the revolution bring forth a new era of fair justice for all people.

Yours is a struggle for fair and equal justice,
Josephine Smith