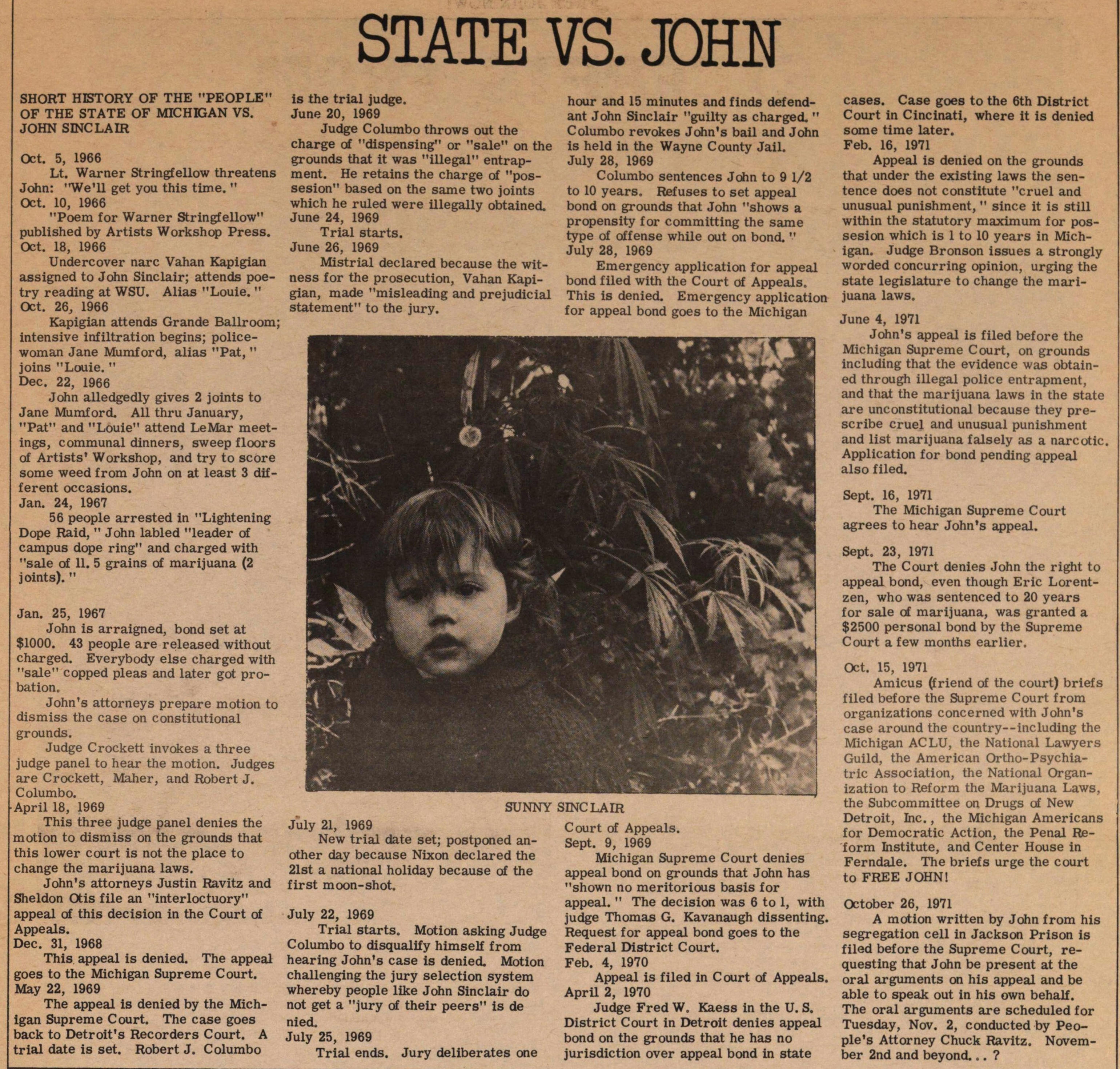 SHORT HISTORY OF THE "PEOPLE" OF THE STATE OF MICHIGAN VS. JOHN SINCLAIR

Jan. 25, 1967 John is arraigned, bond set at $1000. 43 people are released without charged. Everybody else charged with "sale" copped pleas and later got probation. John's attorneys prepare motion to dismiss the case on constitutional grounds. Judge Crockett invokes a three judge panel to hear the motion. Judges are Crockett, Maher, and Robert J. Columbo.

April 18, 1969 This three judge panel denies the motion to dismiss on the grounds that this lower court is not the place to change the marijuana laws. John's attorneys Justin Ravitz and Sheldon Otis file an "interloctuory" appeal of this decision in the Court of Appeals.

Dec. 31, 1968 This appeal is denied. The appeal goes to the Michigan Supreme Court.

May 22, 1969 The appeal is denied by the Michigan Supreme Court. The case goes back to Detroit's Recorders Court. A trial date is set. Robert J. Columbo is the trial judge.

June 20, 1969 Judge Columbo throws out the charge of "dispensing" or "sale" on the grounds that it was "illegal" entrapment. He retains the charge of "possesion" based on the same two joints which he ruled were illegally obtained.

June 26, 1969 Mistrial declared because the witness for the prosecution, Vahan Kapigian, made "misleading and prejudicial statement" to the jury.

July 21, 1969 New trial date set; postponed another day because Nixon declared the 21st a national holiday because of the first moon-shot.

July 22, 1969 Trial starts. Motion asking Judge Columbo to disqualify himself from hearing John's case is denied. Motion challenging the jury selection system whereby people like John Sinclair do not get a "jury of their peers" is denied.

July 28, 1969 Columbo sentences John to 9 1/2 to 10 years. Refuses to set appeal bond on grounds that John "shows a propensity for committing the same type of offense while out on bond."

Sept. 9, 1969 Michigan Supreme Court denies appeal bond on grounds that John has "shown no meritorious basis for appeal. " The decision was 6 to 1, with judge Thomas G. Kavanaugh dissenting. Request for appeal bond goes to the Federal District Court.

Feb. 16, 1971 Appeal is denied on the grounds that under the existing laws the sentence does not constitute "cruel and unusual punishment," since it is still within the statutory maximum for possesion which is 1 to 10 years in Michigan. Judge Bronson issues a strongly worded concurring opinion, urging the state legislature to change the marijuana laws.

June 4, 1971 John's appeal is filed before the Michigan Supreme Court, on grounds including that the evidence was obtained through illegal police entrapment, and that the marijuana laws in the state are unconstitutional because they prescribe cruel and unusual punishment and list marijuana falsely as a narcotic. Application for bond pending appeal also filed.

Sept. 23, 1971 The Court denies John the right to appeal bond, even though Eric Lorentzen, who was sentenced to 20 years for sale of marijuana, was granted a $2500 personal bond by the Supreme Court a few months earlier.

Oct. 15, 1971 Amicus (friend of the court) briefs filed before the Supreme Court from organizations concerned with John's case around the country - including the Michigan ACLU, the National Lawyers Guild, the American Psychiatric Association, the National Organization to Reform the Marijuana Laws, the Subcommittee on Drugs of New Detroit, Inc., the Michigan Americans for Democratic Action, the Penal Reform Institute, and Center House in Ferndale. The briefs urge the court to FREE JOHN!

October 26, 1971 A motion written by John from his segregation cell in Jackson Prison is filed before the Supreme Court, requesting that John be present at the oral arguments on his appeal and be able to speak out in his own behalf. The oral arguments are scheduled for Tuesday, Nov. 2, conducted by People's Attorney Chuck Ravitz. November 2nd and beyond. . . ?