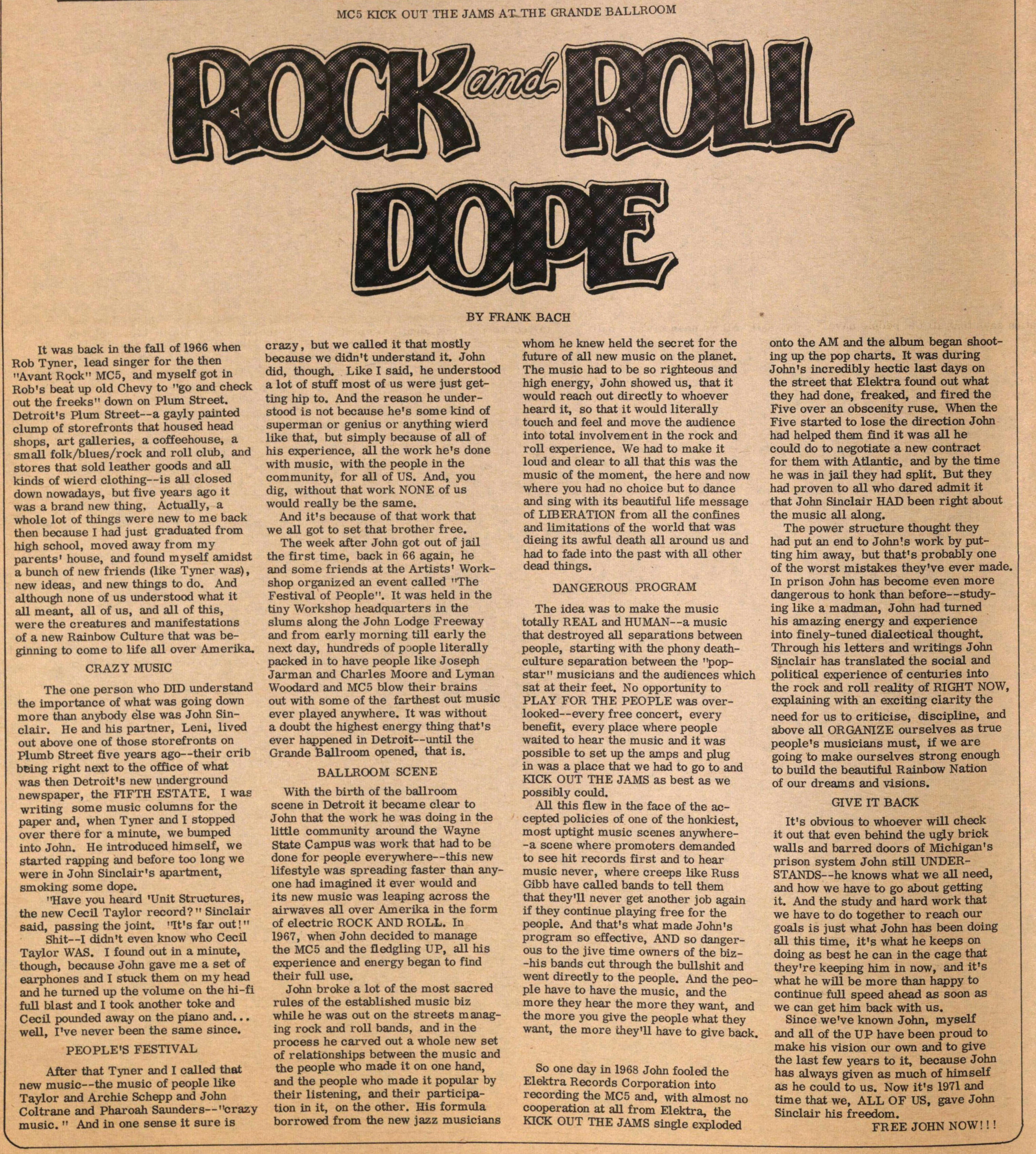 MC5 KICK OUT THE JAMS AT THE GRANDE BALLROOM

It was back in the fall of 1966 when Rob Tyner, lead singer for the then "Avant Rock" MC5, and myself got in Rob's beat up old Chevy to "go and check out the freeks" down on Plum Street. Detroit's Plum Street--a gayly painted clump of storefronts that housed head shops, art galleries, a coffeehouse, a small folk/blues/rock and roll club, and stores that sold leather goods and all kinds of wierd clothing--is all closed down nowadays, but five years ago it was a brand new thing. Actually, a whole lot of things were new to me back then because I had just graduated from high school, moved away from my parents' house, and found myself amidst a bunch of new friends (like Tyner was), new ideas, and new things to do. And although none of us understood what it all meant, all of us, and all of this, were the creatures and manifestations of a new Rainbow Culture that was beginning to come to life all over Amerika.

The one person who DID understand the importance of what was going down more than anybody else was John Sinclair. He and his partner, Leni, lived out above one of those storefronts on Plumb Street five years ago--their crib being right next to the office of what was then Detroit's new underground newspaper, the FIFTH ESTATE. I was writing some music columns for the paper and, when Tyner and I stopped over there for a minute, we bumped into John. He introduced himself, we started rapping and before too long we were in John Sinclair's apartment, smoking some dope.

"Have you heard 'Unit Structures, the new Cecil Taylor record?" Sinclair said, passing the joint. "It's far out! "

Shit--I didn't even know who Cecil Taylor WAS. I found out in a minute, though, because John gave me a set of earphones and I stuck them on my head and he turned up the volume on the hi-fi full blast and I took another toke and Cecil pounded away on the piano and. . . well, I've never been the same since.

After that Tyner and I called that new music - the music of people like Taylor and Archie Schepp and John Coltrane and Pharoah Saunders--"crazy music." And in one sense it sure is crazy , but we called it that mostly because we didn't understand it. John did, though. Like I said, he understood a lot of stuff most of us were just getting hip to. And the reason he understood is not because he's some kind of superman or genius or anything wierd like that, but simply because of all of his experience, all the work he's done with music, with the people in the community, for all of US. And, you dig, without that work NONE of us would really be the same.

And it's because of that work that we all got to set that brother free.

The week after John got out of jail the first time, back in 66 again, he and some friends at the Artists' Workshop organized an event called "The Festival of People". It was held in the tiny Workshop headquarters in the slums along the John Lodge Freeway and from early morning till early the next day, hundreds of people literally packed in to have people like Joseph Jarman and Charles Moore and Lyman Woodard and MC5 blow their brains out with some of the farthest out music ever played anywhere. It was without a doubt the highest energy thing that's ever happened in Detroit - until the Grande Ballroom opened, that is.

With the birth of the ballroom scene in Detroit it became clear to John that the work he was doing in the little community around the Wayne State Campus was work that had to be done for people everywhere--this new lifestyle was spreading faster than anyone had imagined it ever would and its new music was leaping across the airwaves all over Amerika in the form of electric ROCK AND ROLL. In 1967, when John decided to manage the MC5 and the fledgling UP, all his experience and energy began to find their full use.

John broke a lot of the most sacred rules of the established music biz while he was out on the streets managing rock and roll bands, and in the process he carved out a whole new set of relationships between the music and the people who made it on one hand, and the people who made it popular by their listening, and their participation in it, on the other. His formula borrowed from the new jazz musicians whom he knew held the secret for the future of all new music on the planet. The music had to be so righteous and high energy, John showed us, that it would reach out directly to whoever heard it, so that it would literally touch and feel and move the audience into total involvement in the rock and roll experience. We had to make it loud and clear to all that this was the music of the moment, the here and now where you had no choice but to dance and sing with its beautiful life message of LIBERATION from all the confines and limitations of the world that was dieing its awful death all around us and had to fade into the past with all other dead things.

The idea was to make the music totally REAL and HUMAN--a music that destroyed all separations between people, starting with the phony deathculture separation between the "popstar" musicians and the audiences which sat at their feet. No opportunity to PLAY FOR THE PEOPLE was overlooked--every free concert, every benefit, every place where people waited to hear the music and it was possible to set up the amps and plug in was a place that we had to go to and KICK OUT THE JAMS as best as we possibly could.

All this flew in the face of the accepted policies of one of the honkiest, most uptight music scenes anywhere--a scene where promoters demanded to see hit records first and to hear music never, where creeps like Russ Gibb have called bands to tell them that they'll never get another job again if they continue playing free for the people. And that's what made John's program so effective, AND so dangerous to the jive time owners of the biz--his bands cut through the bullshit and went directly to the people. And the people have to have the music, and the more they hear the more they want, and the more you give the people what they want, the more they'll have to give back.

So one day in 1968 John fooled the Elektra Records Corporation into recording the MC5 and, with almost no cooperation at all from Elektra, the KICK OUT THE JAMS single exploded onto the AM and the album began shooting up the pop charts. It was during John's incredibly hectic last days on the street that Elektra found out what they had done, freaked, and fired the Five over an obscenity ruse. When the Five started to lose the direction John had helped them find it was all he could do to negotiate a new contract for them with Atlantic, and by the time he was in jail they had split. But they had proven to all who dared admit it that John Sinclair HAD been right about the music all along.

The power structure thought they had put an end to John's work by putting him away, but that's probably one of the worst mistakes they've ever made. In prison John has become even more dangerous to honk than before--studying like a madman, John had turned his amazing energy and experience into finely-tuned dialectical thought. Through his letters and writings John Sinclair has translated the social and political experience of centuries into the rock and roll reality of RIGHT NOW, explaining with an exciting clarity the need for us to criticise, discipline, and above all ORGANIZE ourselves as true people's musicians must, if we are going to make ourselves strong enough to build the beautiful Rainbow Nation of our dreams and visions.

It's obvious to whoever will check it out that even behind the ugly brick walls and barred doors of Michigan's prison system John still UNDERSTANDS--he knows what we all need, and how we have to go about getting it. And the study and hard work that we have to do together to reach our goals is just what John has been doing all this time, it's what he keeps on doing as best he can in the cage that they're keeping him in now, and it's what he will be more than happy to continue full speed ahead as soon as we can get him back with us.

Since we've known John, myself and all of the UP have been proud to make his vision our own and to give the last few years to it, because John has always given as much of himself as he could to us. Now it's 1971 and time that we, ALL OF US, gave John Sinclair his freedom.