John Must Be Set Free! 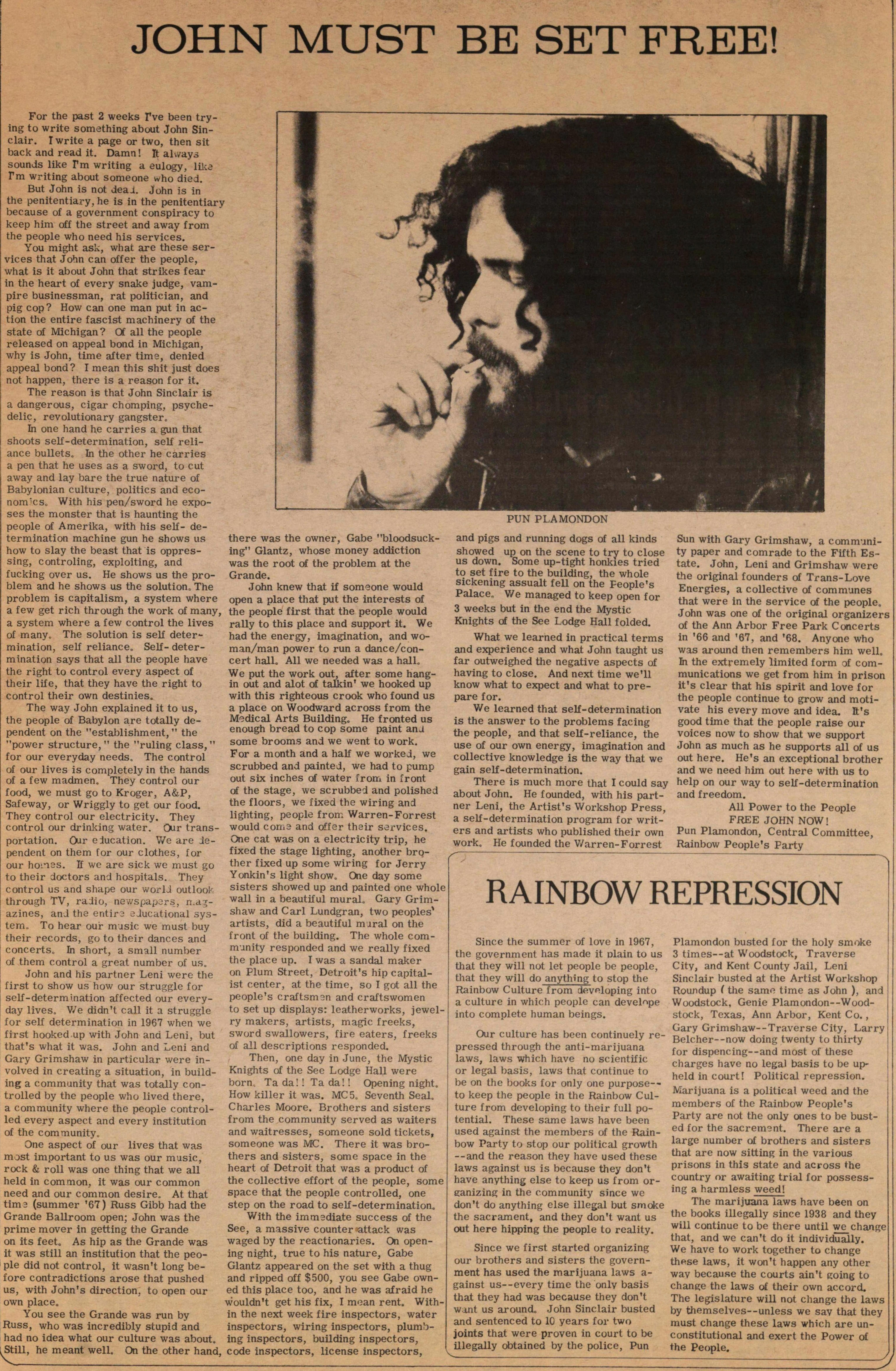 JOHN MUST BE SET FREE!

You might ask, what are these services that John can offer the people, what is it about John that strikes fear in the heart of every snake judge, vampire businessman, rat politician, and pig cop? How can one man put in action the entire fascist machinery of the state of Michigan? Of all the people released on appeal bond in Michigan, why is John, time after time, denied appeal bond? I mean this shit just does not happen, there is a reason for it.

The reason is that John Sinclair is a dangerous, cigar chomping, psychedelic, revolutionary gangster.

In one hand he carries a gun that shoots self-determination, self reliance bullets. In the other he carries a pen that he uses as a sword, to cut away and lay bare the true nature of Babylonian culture, politics and economics. With his pen/sword he exposes the monster that is haunting the people of Amerika, with his determination machine gun he shows us how to slay the beast that is oppressing, controling, exploiting, and fucking over us. He shows us the problem and he shows us the solution. The problem is capitalism, a system where a few get rich through the work of many, a system where a few control the lives of many. The solution is self determination, self reliance. Self-determination says that all the people have the right to control every aspect of their life, that they have the right to control their own destinies.

The way John explained it to us, the people of Babylon are totally dependent on the "establishment," the "power structure," the "ruling class," for our everyday needs. The control of our lives is completely in the hands of a few madmen. They control our food, we must go to Kroger, A&P, Safeway, or Wriggly to get our food. They control our electricity. They control our drinking water. Our transportation. Our education. We are dependent on them for our clothes, for our homes. If we are sick we must go to their doctors and hospitals. They control us and shape our world outlook through TV, radio, newspapers, magazines, and the entire educational system. To hear our music we must buy their records, go to their dances and concerts. In short, a small number of them control a great number of us.

John and his partner Leni were the first to show us how our struggle for self-determination affected our everyday lives. We didn't call it a struggle for self determination in 1967 when we first hooked up with John and Leni, but that's what it was. John and Leni and Gary Grimshaw in particular were involved in creating a situation, in building a community that was totally controlled by the people who lived there, a community where the people controlled every aspect and every institution of the community.

One aspect of our lives that was most important to us was our music, rock & roll was one thing that we all held in common, it was our common need and our common desire. At that time (summer '67) Russ Gibb had the Grande Ballroom open; John was the prime mover in getting the Grande on its feet. As hip as the Grande was it was still an institution that the people did not control, it wasn't long before contradictions arose that pushed us, with John's direction, to open our own place.

You see the Grande was run by Russ, who was incredibly stupid and had no idea what our culture was about. Still, he meant well. On the other hand, there was the owner, Gabe "bloodsucking" Glantz, whose money addiction was the root of the problem at the Grande.

John knew that if someone would open a place that put the interests of the people first that the people would rally to this place and support it. We had the energy, imagination, and woman/man power to run a dance/concert hall. All we needed was a hall. We put the work out, after some hangin out and alot of talkin' we hooked up with this righteous crook who found us a place on Woodward across from the Medical Arts Building. He fronted us enough bread to cop some paint and some brooms and we went to work. For a month and a half we worked, we scrubbed and painted, we had to pump out six inches of water from in front of the stage, we scrubbed and polished the floors, we fixed the wiring and lighting, people from Warren-Forrest would come and offer their services. One cat was on a electricity trip, he fixed the stage lighting, another brother fixed up some wiring for Jerry Yonkin's light show. One day some sisters showed up and painted one whole wall in a beautiful mural. Gary Grimshaw and Cari Lundgran, two peoples' artists, did a beautiful mural on the front of the building. The whole community responded and we really fixed the place up. I was a sandal maker on Plum Street, Detroit's hip capitalist center, at the time, so I got all the people's craftsmen and craftswomen to set up displays: leatherworks, jewelry makers, artists, magic freeks, sword swallowers, fire eaters, freeks of all descriptions responded.

Then, one day in June, the Mystic Knights of the See Lodge Hall were born. Ta da!! Ta da!! Opening night. How killer it was. MC 5. Seventh Seal. Charles Moore. Brothers and sisters from the community served as waiters and waitresses, someone sold tickets, someone was MC. There it was brothers and sisters, some space in the heart of Detroit that was a product of the collective effort of the people, some space that the people controlled, one step on the road to self-determination.

With the immediate success of the See, a massive counter attack was waged by the reactionaries. On opening night, true to his nature, Gabe Glantz appeared on the set with a thug and ripped off $500, you see Gabe owned this place too, and he was afraid he wouldn't get his fix, I mean rent. Within the next week fire inspectors, water inspectors, wiring inspectors, plumbing inspectors, building inspectors, code inspectors, license inspectors, and pigs and running dogs of all kinds showed up on the scene to try to close us down. Some up-tight honkies tried to set fire to the building, the whole sickening assualt fell on the People's Palace. We managed to keep open for 3 weeks but in the end the Mystic Knights of the See Lodge Hall folded.

What we learned in practical terms and experience and what John taught us far outweighed the negative aspects of having to close. And next time we'll know what to expect and what to prepare for.

There is much more that I could say about John. He founded, with his partner Leni, the Artist's Workshop Press, a self-determination program for writers and artists who published their own work. He founded the Warren-Forrest Sun with Gary Grimshaw, a community paper and comrade to the Fifth Estate. John, Leni and Grimshaw were the original founders of Love Energies, a collective of communes that were in the service of the people. John was one of the original organizers of the Ann Arbor Free Park Concerts in '66 and '67, and '68. Anyone who was around then remembers him well. In the extremely limited form of communications we get from him in prison it's clear that his spirit and love for the people continue to grow and motivate his every move and idea. It's good time that the people raise our voices now to show that we support John as much as he supports all of us out here. He's an exceptional brother and we need him out here with us to help on our way to self-determination and freedom.

All Power to the People FREE JOHN NOW !