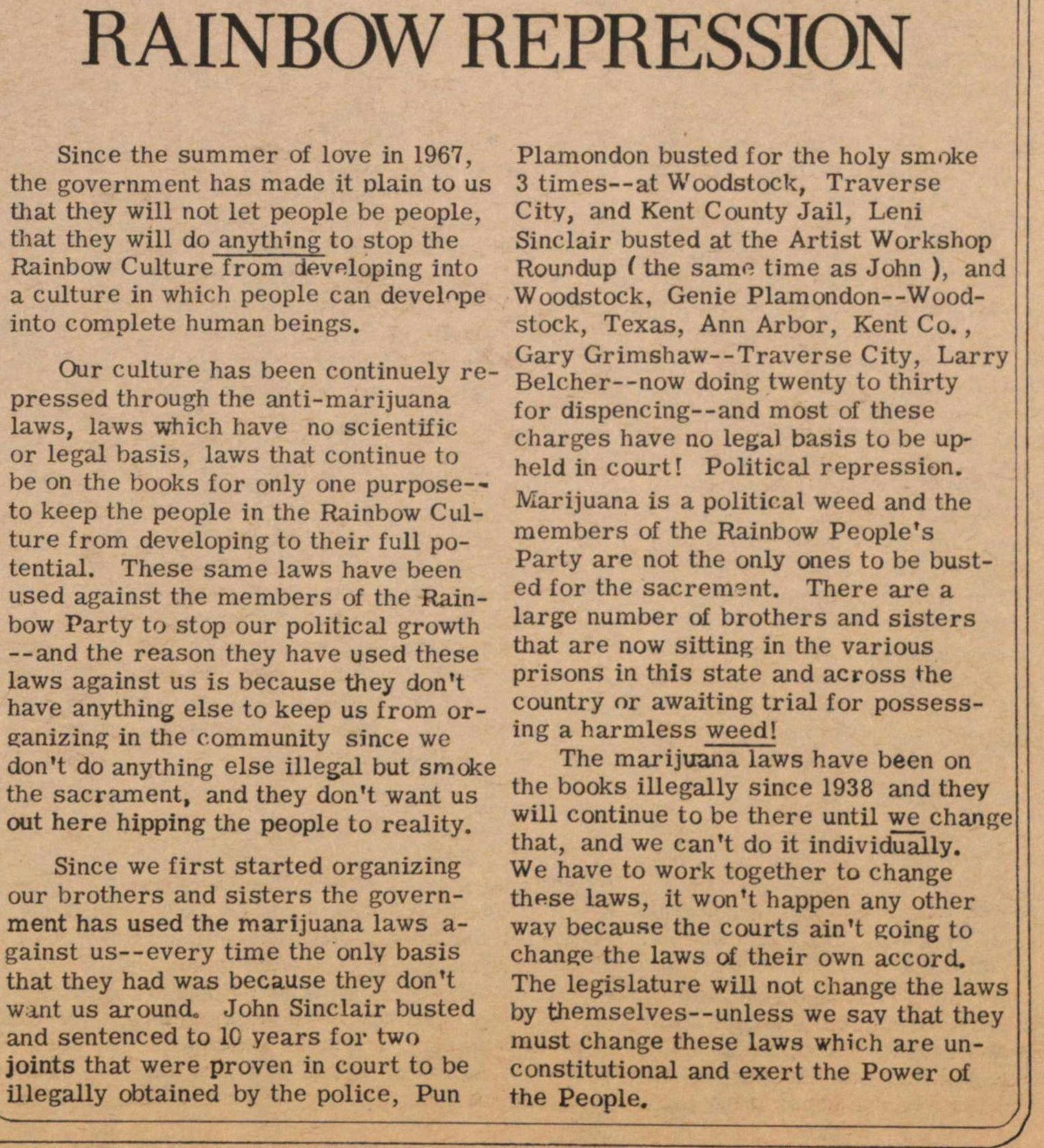 Since the summer of love in 1967, the government has made it plain to us that they will not let people be people, that they will do anything to stop the Rainbow Culture from developing into a culture in which people can develope into complete human beings.

Our culture has been continuely repressed through the anti-marijuana laws, laws which have no scientific or legal basis, laws that continue to be on the books for only one purpose--to keep the people in the Rainbow Culture from developing to their full potential. These same laws have been used against the members of the Rainbow Party to stop our political growth--and the reason they have used these laws against us is because they don't have anything else to keep us from organizing in the community since we don't do anything else illegal but smoke the sacrament, and they don't want us out here hipping the people to reality.

Since we first started organizing our brothers and sisters the government has used the marijuana laws against us--every time the only basis that they had was because they don't want us around. John Sinclair busted and sentenced to 10 years for two joints that were proven in court to be illegally obtained by the police, Pun Plamondon busted for the holy smoke 3 times--at Woodstock, Traverse City, and Kent County Jail, Leni Sinclair busted at the Artist Workshop Roundup ( the same time as John), and Woodstock, Genie Plamondon--Woodstock, Texas, Ann Arbor, Kent Co. , Gary Grimshaw--Traverse City, Larry Belcher--now doing twenty to thirty for dispencing--and most of these charges have no legal basis to be upheld in court! Political repression. Marijuana is a political weed and the members of the Rainbow People's Party are not the only ones to be busted for the sacrament. There are a large number of brothers and sisters that are now sitting in the various prisons in this state and across the country or awaiting trial for possessing a harmless weed!

The marijuana laws have been on the books illegally since 1938 and they will continue to be there until we change that, and we can't do it individually. We have to work together to change these laws, it won't happen any other way because the courts ain't going to change the laws of their own accord. The legislature will not change the laws by themselves--unless we say that they must change these laws which are unconstitutional and exert the Power of the People.