The Sentencing Of John Sinclair 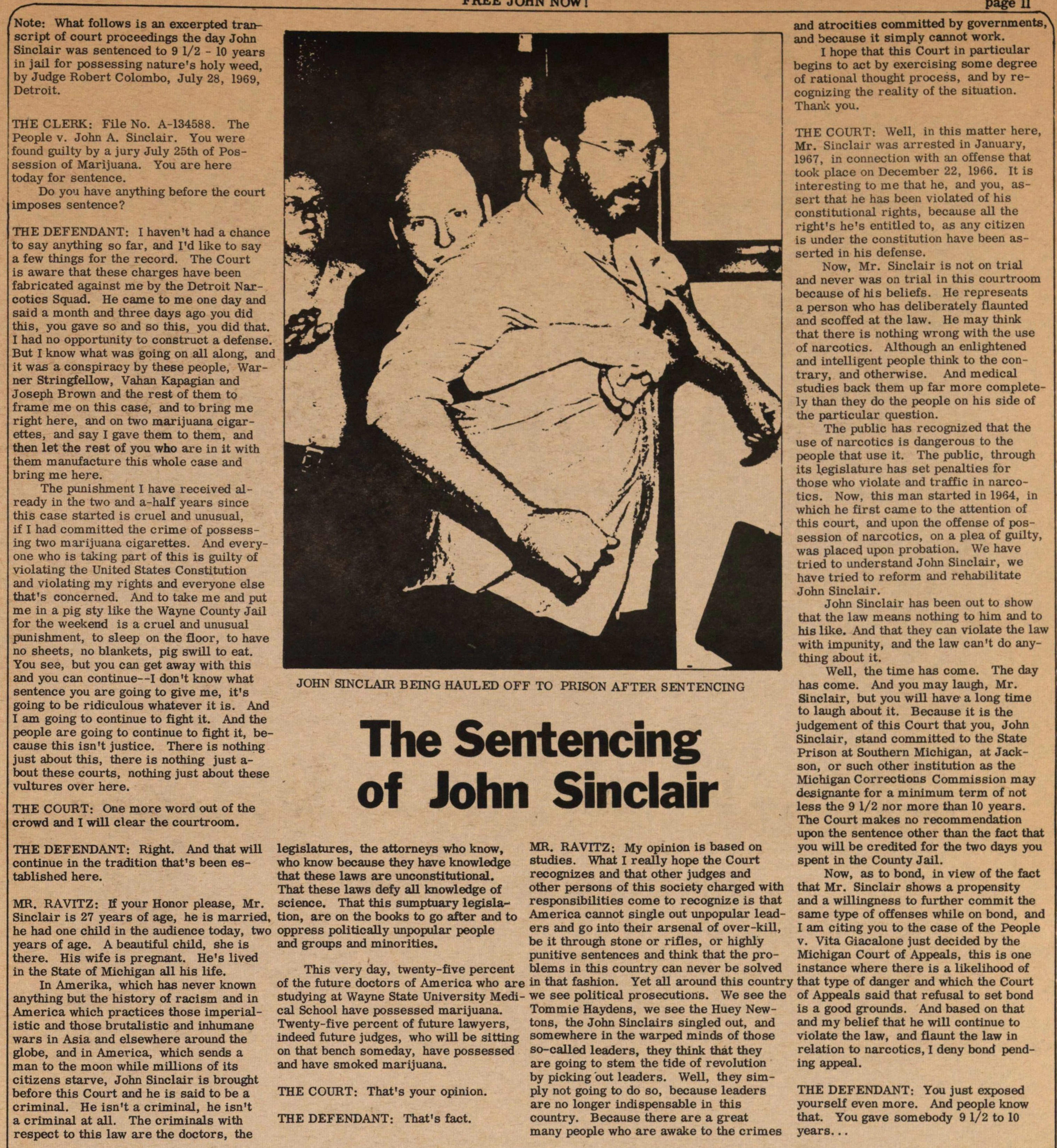 The Sentencing of John Sinclair

Note: What follows is an excerpted transcript of court proceedings the day John Sinclair was sentenced to 9 1/2 - 10 years in jail for possessing nature's holy weed, by Judge Robert Colombo, July 28, 1969, Detroit.

THE CLERK: File No. A-134588. The People v. John A. Sinclair. You were found guilty by a jury July 25th of Possession of Marijuana. You are here today for sentence.

Do you have anything before the court imposes sentence?

THE DEFENDANT: I haven't had a chance to say anything so far, and I'd like to say a few things for the record. The Court is aware that these charges have been fabricated against me by the Detroit Narcotics Squad. He came to me one day and said a month and three days ago you did this, you gave so and so this, you did that. I had no opportunity to construct a defense. But I know what was going on all along, and it was a conspiracy by these people, Warner Stringfellow, Vahan Kapagian and Joseph Brown and the rest of them to frame me on this case, and to bring me right here, and on two marijuana cigarettes, and say I gave them to them, and then let the rest of you who are in it with them manufacture this whole case and bring me here.

The punishment I have received already in the two and a-half years since this case started is cruel and unusual, if I had committed the crime of possessing two marijuana cigarettes. And everyone who is taking part of this is guilty of violating the United States Constitution and violating my rights and everyone else that's concerned. And to take me and put me in a pig sty like the Wayne County Jail for the weekend is a cruel and unusual punishment, to sleep on the floor, to have no sheets, no blankets, pig swill to eat. You see, but you can get away with this and you can continue - I don 't know what sentence you are going to give me, it's going to be ridiculous whatever it is. And I am going to continue to fight it. And the people are going to continue to fight it, because this isn't justice. There is nothing just about this, there is nothing just about these courts, nothing just about these vultures over here.

THE COURT: One more word out of the crowd and I will clear the courtroom.

THE DEFENDANT: Right. And that will continue in the tradition that's been established here.

MR. RAVITZ: ïf your Honor please, Mr. Sinclair is 27 years of age, he is married, he had one child in the audience today, two years of age. A beautiful child, she is there. His wife is pregnant. He's lived in the State of Michigan all his life.

In Amerika, which has never known anything but the history of racism and in America which practices those imperialistic and those brutalistic and inhumane wars in Asia and elsewhere around the globe, and in America, which sends a man to the moon while millions of its citizens starve, John Sinclair is brought before this Court and he is said to be a criminal. He isn't a criminal, he isn't a criminal at all. The criminals with respect to this law are the doctors, the legislatures, the attorneys who know, who know because they have knowledge that these laws are unconstitutional. That these laws defy all knowledge of science. That this sumptuary legislation, are on the books to go after and to oppress politically unpopular people and groups and minorities.

THE COURT: That's your opinion.

MR. RAVITZ: My opinion is based on studies. What I really hope the Court recognizes and that other judges and other persons of this society charged with responsibilities come to recognize is that America cannot single out unpopular leaders and go into their arsenal of over-kill, be it through stone or rifles, or highly punitive sentences and think that the problems in this country can never be solved in that fashion. Yet all around this country we see political prosecutions. We see the Tommie Haydens, we see the Huey Newtons, the John Sinclairs singled out, and somewhere in the warped minds of those so-called leaders, they think that they are going to stem the tide of revolution by picking out leaders. Well, they simply not going to do so, because leaders are no longer indispensable in this country. Because there are a great many people who are awake to the crimes and atrocities commited by governments because it simply cannot work.

I hope that this Court in particular begins to act by exercising some degree of rational thought process, and by recognizing the reality of the situation. Thank you.

THE COURT: Well, in this matter here, Mr. Sinclair was arrested in January, 1967, in connection with an offense that took place on December 22, 1966. It is interesting to me that he, and you, assert that he has been violated of his constitutional rights, because all the rights he's entitled to, as any citizen is under the constitution have been asserted in his defense.

Now, Mr. Sinclair is not on trial and never was on trial in this courtroom because of his beliefs. He represents a person who has deliberately flaunted and scoffed at the law. He may think that there is nothing wrong with the use of narcotics. Although an enlightened and intelligent people think to the contrary, and otherwise. And medical studies back them up far more completely than they do the people on his side of the particular question.

The public has recognized that the use of narcotics is dangerous to the people that use it. The public, through its legislature has set penalties for those who violate and traffic in narcotics. Now, this man started in 1964, in which he first came to the attention of this court, and upon the offense of possession of narcotics, on a plea of guilty, was placed upon probation. We have tried to understand John Sinclair, we have tried to reform and rehabilitate John Sinclair.

John Sinclair has been out to show that the law means nothing to him and to his like. And that they can violate the law with impunity, and the law can't do anything about it.

Well, the time has come. The day has come. And you may laugh, Mr. Sinclair, but you will have a long time to laugh about it. Because it is the judgement of this Court that you, John Sinclair, stand committed to the State Prison at Southern Michigan, at Jackson, or such other institution as the Michigan Corrections Commission may designate for a minimum term of not less the 9 1/2 nor more than 10 years. The Court makes no recommendation upon the sentence other than the fact that you will be credited for the two days you spent in the County Jail.

Now, as to bond, in view of the fact that Mr. Sinclair shows a propensity and a willingness to further commit the same type of offenses while on bond, and I am citing you to the case of the People v. Vita Giacalone just decided by the Michigan Court of Appeals, this is one instance where there is a likelihood of that type of danger and which the Court of Appeals said that refusal to set bond is a good grounds. And based on that and my belief that he will continue to violate the law, and flaunt the law in relation to narcotics, I deny bond pending appeal.

THE DEFENDANT: You just exposed yourself even more. And people know that. You gave somebody 9 1/2 to 10 years...

[Image Caption: JOHN SINCLAIR BEING HAULED OFF TO PRISON AFTER SENTENCING]