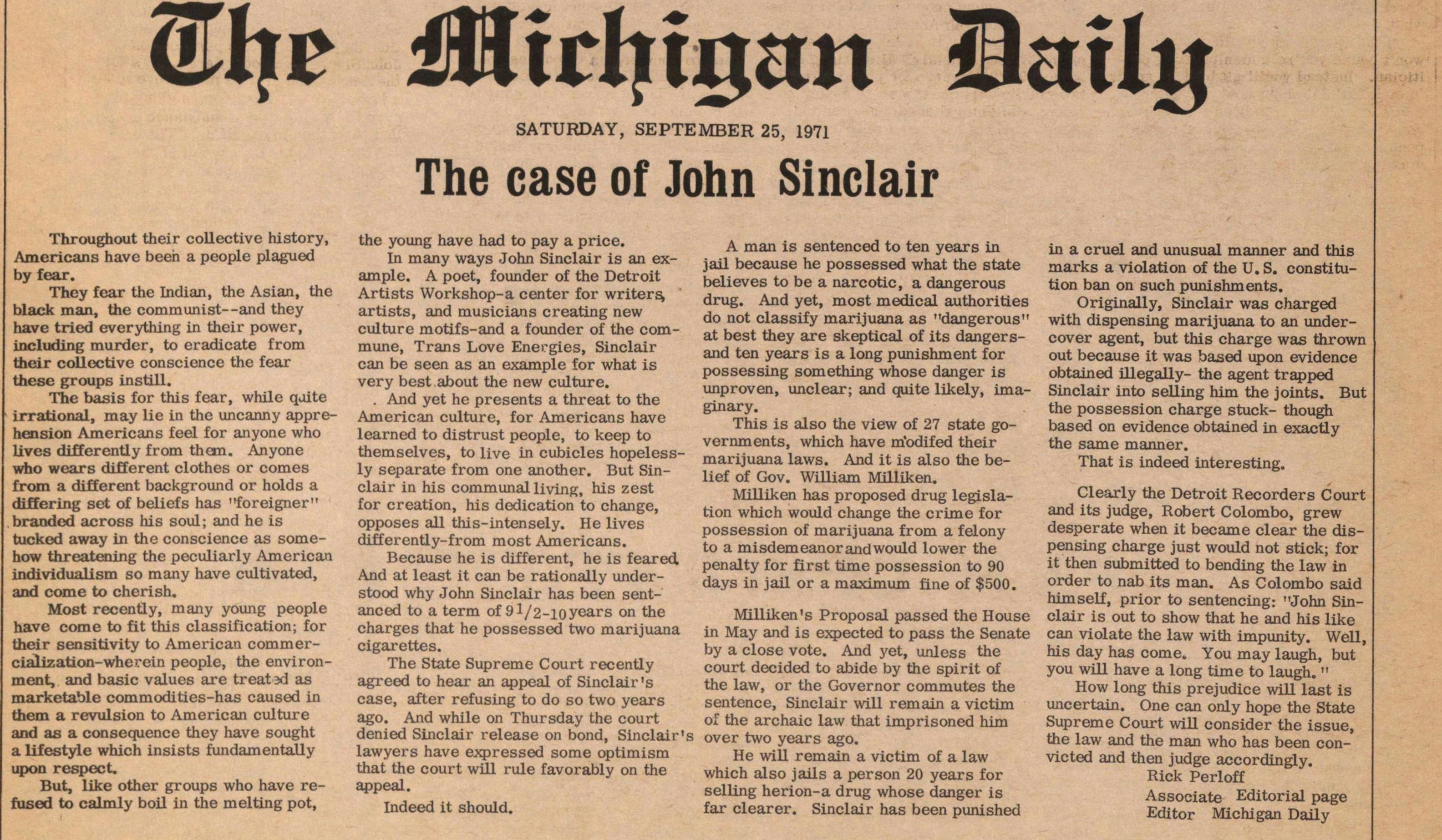 The Case of John Sinclair

Throughout their collective history, Americans have been a people plagued by fear.

They fear the Indian, the Asian, the black man, the communist -- and they have tried everything in their power, including murder, to eradicate from their collective conscience the fear these groups instill.

The basis for this fear, while quite irrational, may lie in the uncanny apprehension Americans feel for anyone who lives differently from them. Anyone who wears different clothes or comes from a different background or holds a differing set of beliefs has "foreigner" branded across his soul; and he is tucked away in the conscience as somehow threatening the peculiarly American individualism so many have cultivated, and come to cherish.

Most recently, many young people have come to fit this classification; for their sensitivity to American commercialization–wherein people, the environment, and basic values are treated as marketable commodities–has caused in them a revulsion to American culture and as a consequence they have sought a lifestyle which insists fundamentally upon respect.

But, like other groups who have refused to calmly boil in the melting pot, the young have had to pay a price.

In many ways John Sinclair is an example. A poet, founder of the Detroit Artists Workshop–a center for writers, artists, and musicians creating new culture motifs–and a founder of the commune, Trans Love Energies, Sinclair can be seen as an example for what is very best about the new culture.

And yet he presents a threat to the American culture, for Americans have learned to distrust people, to keep to themselves, to live in cubicles hopelessly separate from one another. But Sinclair in his communal living, his zest for creation, his dedication to change, opposes all this-intensely. He lives differently-from most Americans.

Because he is different, he is feared, And at least it can be rationally understood why John Sinclair has been sentanced to a term of 9 1/2-10 years on the charges that he possessed two marijuana cigarettes.

The State Supreme Court recently agreed to hear an appeal of Sinclair's case, after refusing to do so two years ago. And while on Thursday the court denied Sinclair release on bond, Sinclair's lawyers have expressed some optimism that the court will rule favorably on the appeal.

A man is sentenced to ten years in ail because he possessed what the state believes to be a narcotic, a dangerous drug. And yet, most medical authorities do not classify marijuana as "dangerous" it best they are skeptical of its dangers–and ten years is a long punishment for possessing something whose danger is unproven, unclear; and quite likely, imaginary.

This is also the view of 27 state governments, which have modifed their marijuana laws. And it is also the belief of Gov. William Milliken.

Milliken has proposed drug legislation which would change the crime for possession of marijuana from a felony to a misdemeanor and would lower the penalty for first time possession to 90 days in jail or a maximum fine of $500.

Milliken's Proposal passed the House in May and is expected to pass the Senate by a close vote. And yet, unless the court decided to abide by the spirit of the law, or the Governor commutes the sentence, Sinclair will remain a victim of the archaic law that imprisoned him over two years ago.

He will remain a victim of a law which also jails a person 20 years for selling herion–a drug whose danger is far clearer. Sinclair has been punished in a cruel and unusual manner and this marks a violation of the U. S. constitution ban on such punishments.

Originally, Sinclair was charged with dispensing marijuana to an undercover agent, but this charge was thrown out because it was based upon evidence obtained illegall–the agent trapped Sinclair into selling him the joints. But the possession charge though based on evidence obtained in exactly the same manner.

That is indeed interesting.

Clearly the Detroit Recorders Court and its judge, Robert Colombo, grew desperate when it became clear the dispensing charge just would not stick; for it then submitted to bending the law in order to nab its man. As Colombo said himself, prior to sentencing: "John Sinclair is out to show that he and his like can violate the law with impunity. Well, his day has come. You may laugh, but you will have a long time to laugh."

How long this prejudice will last is uncertain. One can only hope the State Supreme Court will consider the issue, the law and the man who has been convicted and then judge accordingly.