Letters To And From Governor Milliken 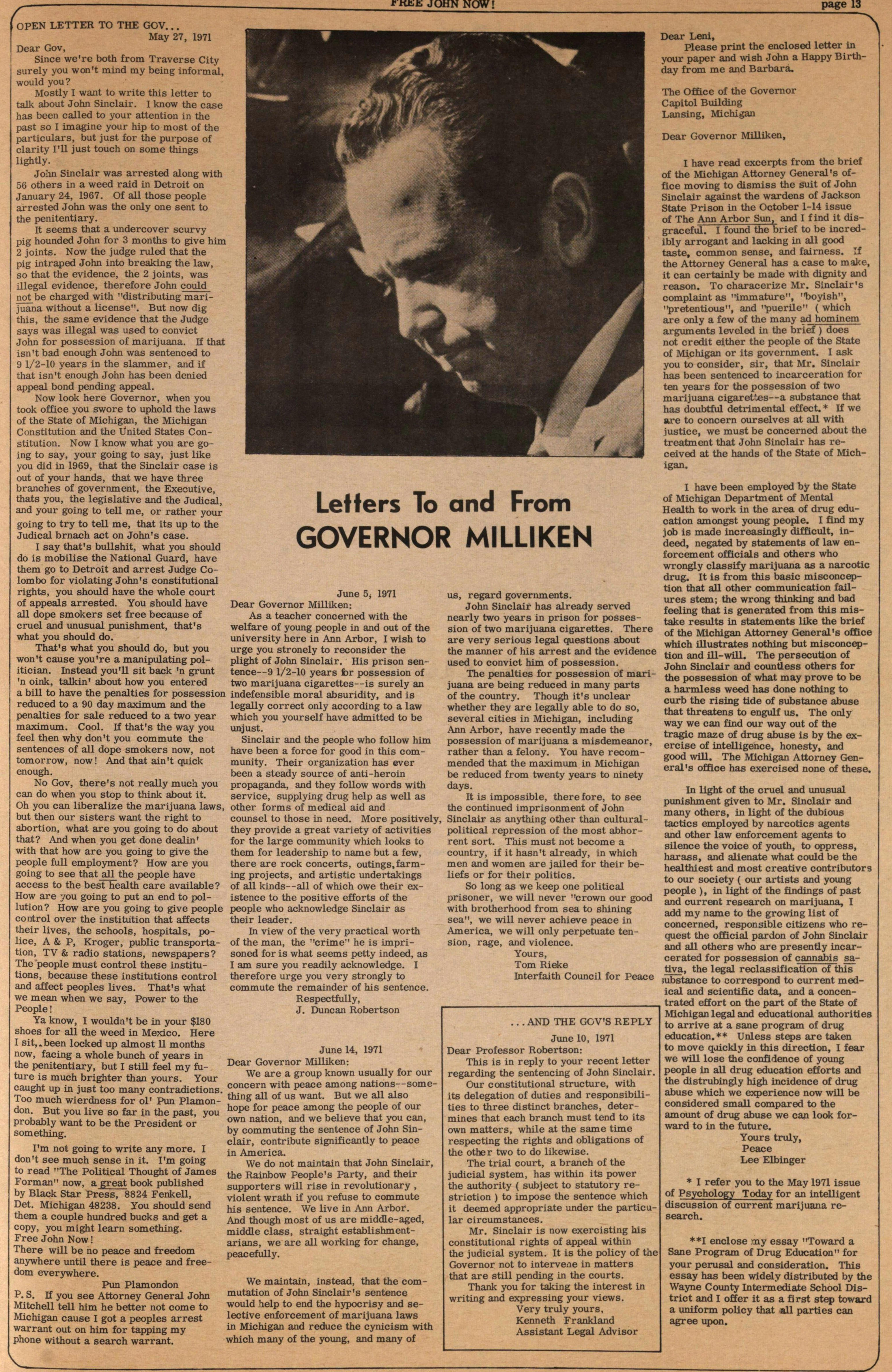 Since we're both from Traverse City surely you won't mind my being informal, would you?

Mostly I want to write this letter to talk about John Sinclair. I know the case has been called to your attention in the past so I imagine your hip to most of the particulars, but just for the purpose of clarity I'll just touch on some things lightly.

John Sinclair was arrested along with 56 others in a weed raid in Detroit on January 24, 1967. Of all those people arrested John was the only one sent to the penitentiary.

It seems that a undercover scurvy pig hounded John for 3 months to give him 2 joints. Now the judge ruled that the pig intraped John into breaking the law, so that the evidence, the 2 joints, was illegal evidence, therefore John could not be charged with "distributing marijuana without a license". But now dig this, the same evidence that the Judge says was illegal was used to convict John for possession of marijuana. If that isn't bad enough John was sentenced to 9 1/2-10 years in the slammer, and if that isn't enough John has been denied appeal bond pending appeal.

Now look here Governor, when you took office you swore to uphold the laws of the State of Michigan, the Michigan Constitution and the United States Constitution. Now I know what you are going to say, your going to say, just like you did in 1969, that the Sinclair case is out of your hands, that we have three branches of government, the Executive, thats you, the legislative and the Judical, and your going to tell me, or rather your going to try to tell me, that its up to the Judical branch act on John's case.

That's what you should do, but you won't cause you're a manipulating politician. Instead you'll sit back 'n grunt 'n oink, talkin' about how you entered a bill to have the penalties for possession reduced to a 90 day maximum and the penalties for sale reduced to a two year maximum. Cool. If that's the way you feel then why don't you commute the sentences of all dope smokers now, not tomorrow, now! And that ain't quick enough.

Ya know, I wouldn't be in your $180 shoes for all the weed in Mexico. Here I sit, been locked up almost 11 months now, facing a whole bunch of years in the penitentiary, but I still feel my future is much brighter than yours. Your caught up in just too many contradictions. Too much wierdness for ol' Pun Plamondon. But you live so far in the past, you probably want to be the President or something.

I'm not going to write any more. I don't see much sense in it. I'm going to read "The Political Thought of James Forman" now, a great book published by Black Star Press, 8824 Fenkell, Det. Michigan 48238. You should send them a couple hundred bucks and get a copy, you might learn something.

P. S. If you see Attorney General John Mitchell tell him he better not come to Michigan cause I got a peoples arrest warrant out on him for tapping my phone without a search warrant.

As a teacher concerned with the welfare of young people in and out of the university here in Ann Arbor, I wish to urge you stronely to reconsider the plight of John Sinclair. His prison sentence - 9 1/2-10 years for possession of two marijuana cigarettes--is surely an indefensibie moral absuridity, and is legally correct only according to a law which you yourself have admitted to be unjust.

Sinclair and the people who follow him have been a force for good in this community. Their organization has ever been a steady source of anti-heroin propaganda, and they follow words with service, supplying drug help as well as other forms of medical aid and counsel to those in need. More positively, they provide a great variety of activities for the large community which looks to them for leadership to name but a few, there are rock concerts, outings, farming projects, and artistic undertakings of all kinds--all of which owe their existence to the positive efforts of the people who acknowledge Sinclair as their leader.

In view of the very practical worth of the man, the "crime" he is imprisoned for is what seems petty indeed, as I am sure you readily acknowledge. I therefore urge you very strongly to commute the remainder of his sentence.

Dear Governor Milliken: We are a group known usually for our concern with peace among nations--something all of us want. But we all also hope for peace among the people of our own nation, and we believe that you can, by commuting the sentence of John Sinclair, contribute significantly to peace in America.

We do not maintain that John Sinclair, the Rainbow People's Party, and their supporters will rise in revolutionary, violent wrath if you refuse to commute his sentence. We live in Ann Arbor. And though most of us are middle-aged, middle class, straight establishmentarians, we are all working for change, peacefully.

We maintain, instead, that the commutation of John Sinclair's sentence would help to end the hypocrisy and selective enforcement of marijuana laws in Michigan and reduce the cynicism with which many of the young, and many of us, regard governments.

John Sinclair has already served nearly two years in prison for possession of two marijuana cigarettes. There are very serious legal questions about the manner of his arrest and the evidence used to convict him of possession.

The penalties for possession of marijuana are being reduced in many parts of the country. Though it's unclear whether they are legally able to do so, several cities in Michigan, including Ann Arbor, have recently made the possession of marijuana a misdemeanor, rather than a felony. You have recommended that the maximum in Michigan be reduced from twenty years to ninety days.

It is impossible, therefore, to see the continued imprisonment of John Sinclair as anything other than cultural-political repression of the most abhorrent sort. This must not become a country, if it hasn't already, in which men and women are jailed for their beliefs or for their politics.

So long as we keep one political prisoner, we will never "crown our good with brotherhood from sea to shining sea", we will never achieve peace in America, we will only perpetuate tension, rage, and violence.

Please print the enclosed letter in your paper and wish John a Happy Birthday from me and Barbara.

The Office of the Governor

I have read excerpts from the brief of the Michigan Attorney General's office moving to dismiss the suit of John Sinclair against the wardens of Jackson State Prison in the October 1-14 issue of The Ann Arbor Sun, and I find it disgraceful. I found the brief to be incredibly arrogant and lacking in all good taste, common sense, and fairness. If the Attorney General has a case to make, it can certainly be made with dignity and reason. To characerize Mr. Sinclair's complaint as "immature", "boyish", "pretentious", and "puerile" ( which are only a few of the many ad hominem arguments leveled in the brief ) does not credit either the people of the State of Michigan or its government. I ask you to consider, sir, that Mr. Sinclair has been sentenced to incarceration for ten years for the possession of two marijuana cigarettes - a substance that has doubtful detrimental effect. If we are to concern ourselves at all with justice, we must be concerned about the treatment that John Sinclair has received at the hands of the State of Michigan.

I have been employed by the State of Michigan Department of Mental Health to work in the area of drug education amongst young people. I find my job is made increasingly difficult, indeed, negated by statements of law enforcement officials and others who wrongly classify marijuana as a narcotic drug. It is from this basic misconception that all other communication failures stem, the wrong thinking and bad feeling that is generated from this mistake results in statements like the brief of the Michigan Attorney General 's office which illustrates nothing but misconception and ill-will. The persecution of John Sinclair and countless others for the possession of what may prove to be a harmless weed has done nothing to curb the rising tide of substance abuse that threatens to engulf us. The only way we can find our way out of the tragic maze of drug abuse is by the exercise of intelligence, honesty, and good will. The Michigan Attorney General's office has exercised none of these.

In light of the cruel and unusual punishment given to Mr. Sinclair and many others, in light of the dubious tactics employed by narcotics agents and other law enforcement agents to silence the voice of youth, to oppress, harass, and alienate what could be the healthiest and most creative contributors to our society (our artists and young people), in light of the findings of past and current research on marijuana, I add my name to the growing list of concerned, responsible citizens who request the official pardon of John Sinclair and all others who are presently incarcerated for possession of cannabis sativa, the legal reclassification of this substance to correspond to current medical and scientific data, and a concentrated effort on the part of the State of Michigan legal and educational authorities to arrive at a sane program of drug education. Unless steps are taken to move quickly in this direction, I fear we will lose the confidence of young people in all drug education efforts and the distrubingly high incidence of drug abuse which we experience now will be considered small compared to the amount of drug abuse we can look forward to in the future.

I refer you to the May 1971 issue of Psychology Today for an intelligent discussion of current marijuana research.

I enclose my essay "Toward a Sane Program of Drug Education" for your perusal and consideration. This essay has been widely distributed by the Wayne County Intermediate School District and I offer it as a first step toward a uniform policy that all parties can agree upon

This is in reply to your recent letter regarding the sentencing of John Sinclair.

Our constitutional structure, with its delegation of duties and responsibilities to three distinct branches, determines that each branch must tend to its own matters, while at the same time respecting the rights and obligations of the other two to do likewise.

The trial court, a branch of the judicial system, has within its power the authority (subject to statutory restriction) to impose the sentence which it deemed appropriate under the particular circumstances.

Mr. Sinclair is now exercisting his constitutional rights of appeal within the judicial system. It is the policy of the Governor not to intervene in matters that are still pending in the courts.

Thank you for taking the interest in writing and expressing your views.